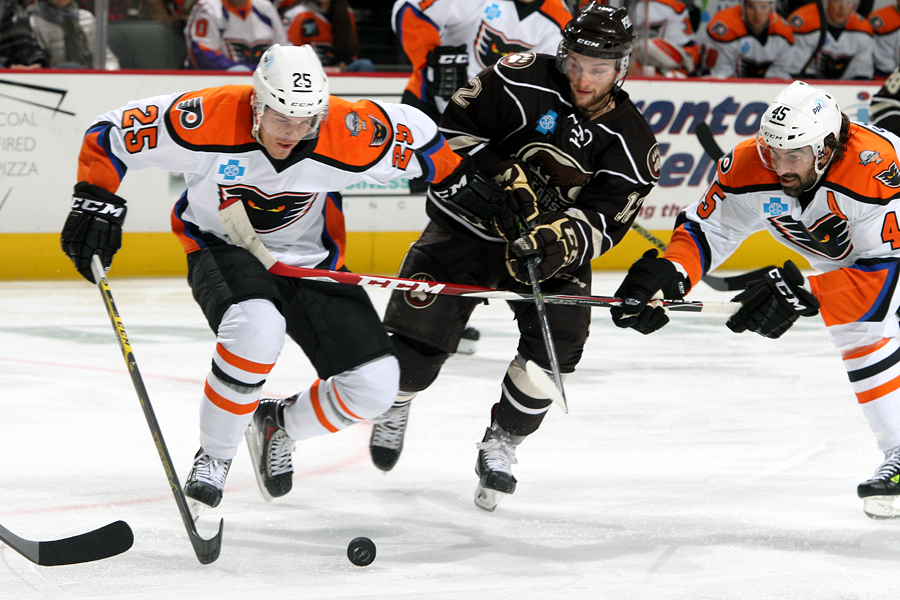 Hershey, PA – Playing three games in about 48 hours, the Lehigh Valley Phantoms secured a pair of wins and four out of a possible six standings points but fell short of a perfect weekend following a 3-0 loss at the Hershey Bears on Sunday evening.

Phoenix Copley out-dueled Anthony Stolarz in a battle of immensely talented rookie goaltenders. Copley notched his second shutout in a row with 22 saves while the Bears avenged their Friday night 4-2 loss to the hands of the Phantoms back at PPL Center in Allentown. The season series among the two East Division rivals is now even at 1-1 with still 10 more tilts on the slate.

The 20-year-old Stolarz allowed two goals on the 29 shots blasted his way during a terrific performance in which he made a number of spectacular saves on Hershey forwards who had broken free and snuck past the Phantoms defense. Still in search of his first pro victory, the Jackson, NJ native was clearly the star of the night for Lehigh Valley. Some of his stops were lightning-quick reactions on point-blank opportunities and direction changes. His windmill glove save on a deflected drive in the slot by Joel Broda was perhaps his top save in an evening full of highlight-reel caliber plays. Stolarz was initially going down to his knees to block the low drive from center-point and had to move quickly after the puck was tipped perfectly and destined for the upper-ninety.

Hershey improved to 5-2-0 to push past the 4-2-0 Phantoms for possession of the top spot in the East Division.

The Phantoms entered the evening ranked second in the league in offense (behind Albany) with four goals per game and were first in the league on the power play at 36%. But Hershey’s defense was able to clamp down on the Lehigh Valley attack and wouldn’t surrender a late comeback as was the case back in the thrilling Friday night encounter.

The Phantoms were playing with an altered and improvised lineup following injuries this weekend to Petr Straka and Mark Alt and the beginning of a three-game suspension against Jay Rosehill. Enter into the fold Derek Mathers and Brett Flemming who were both making their season-debuts for the Phantoms after having played just the night before for the Reading Royals in the ECHL. Flemming found himself in familiar surroundings having spent parts of the past two seasons as a member of the Hershey Bears.

After a scoreless first period, the Hershey Bears struck for a pair of goals in the second. Phillippe Cornet’s third of the year from Tim Kennedy came four minutes into the middle frame. And then rookie Chandler Stephenson scored his first career goal rushing up the left-wing on a shorthanded break. His wrister from the left circle squeaked past Stolarz blocker on the short-side to push the lead to 2-0.

Lehigh Valley tried to step up their pressure and did generate a few quality challenges on Copley but the young netminder didn’t break. The Phantoms had an even better opportunity late in the game with a power-play and pulled goalie setting up a 6-on-4 attack with two minutes to go. But Lehigh Valley was unable to take advantage even there as tired legs in the ninth period of hockey of the weekend perhaps became even more evident. Dustin Gazley finished the night with an empty-net strike to close out the contest. It is the first time for the Lehigh Valley Phantoms to be shut out.

Derek Mathers of the Phantoms and Tim Spencer of the Bears only waited three minutes before the two tough guys agreed to drop the gloves for a spirited bout that would turn to be the lone fisticuffs of the evening. The game was a significantly cleaner and less chippy affair than the initial encounter of two nights earlier.

Hershey out shot Lehigh Valley 30-22. Both teams were 0-for-4 on the power play. The rivals will next meet on November 19 in Allentown for Round 3 out of 12 on the season.

The Phantoms return to PPL Center this Wednesday when they welcome the rival Wilkes-Barre/Scranton Penguins to town for the first time this season. Saturday night’s opponent will be the Hartford Wolf Pack, AHL affiliate of the New York Rangers. Tickets are available now at the Mealey’s Furniture Box Office at PPL Center (701 Hamilton Street), by calling 610-347-TIXX (8499) or online at pplcenter.com.