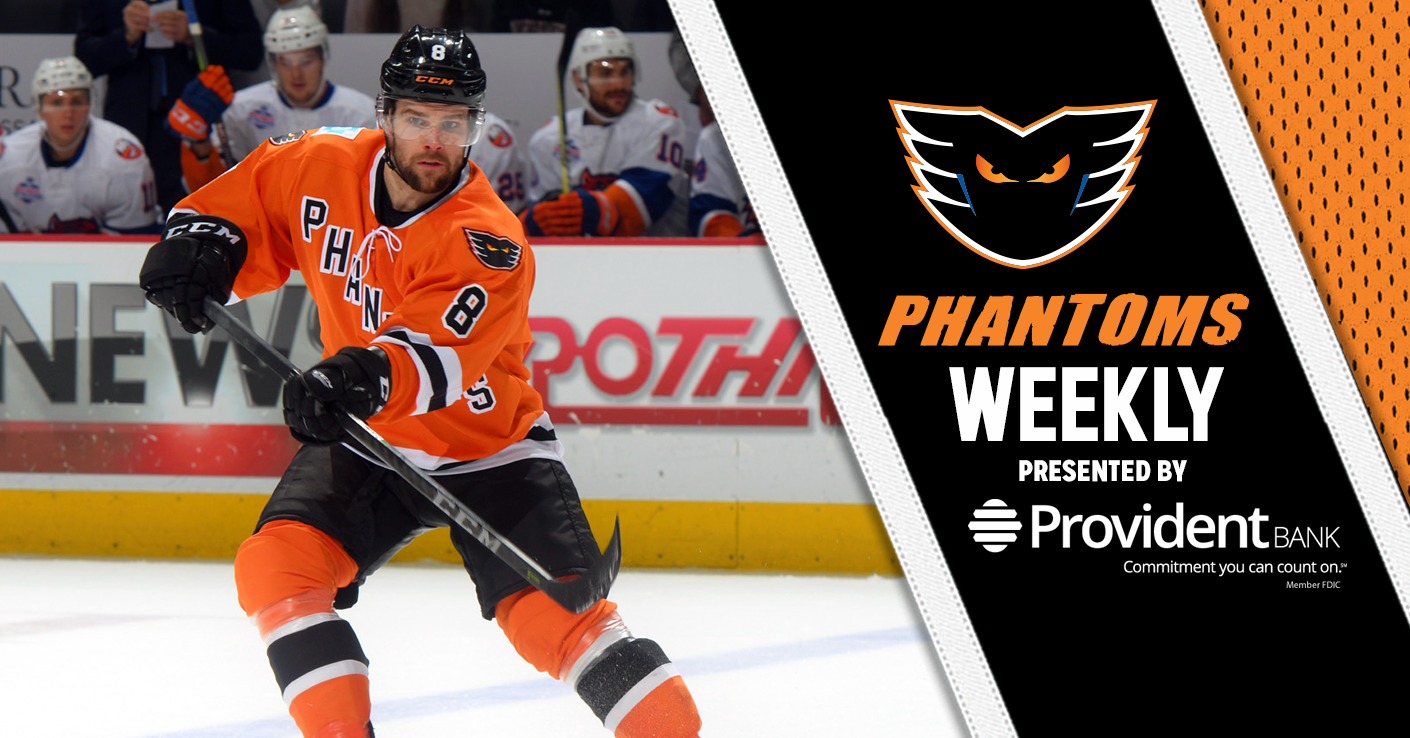 The Lehigh Valley Phantoms (12-6-0-2, 26 pts., 0.650 pts. pct., 2nd Atlantic Division) continue their season-high six-game home stand with three tilts at PPL Center this week, including the highly-anticipated annual Teddy Bear Toss this Saturday, December 2. Lehigh Valley enters the week with the most standings points (26) and tied for the most wins (12) in the Atlantic Division.

The Phantoms return to action this Wednesday, November 29 when they welcome the Binghamton Devils to downtown Allentown for the first time this season. Binghamton (6-9-3-0, 15 pts., 0.417 pts. pct., 7th North Division) is coming off a tough week in which the Devils dropped all three games, including a pair of one-goal decisions. Following a 2-1 overtime setback to the Providence Bruins on Wednesday, Binghamton returned from the Thanksgiving holiday only to be handed a sweep in their home-and-home series with the Rochester Americans (10-3 loss on Friday, 4-3 overtime loss on Saturday). The Devils enter the week having dropped nine of their last 10 contests overall going 1-7-2 since November 4.

Wednesday’s contest will mark the third of six total meetings during the 2017-18 regular season between Lehigh Valley and Binghamton with the Phantoms having claimed each of the first two collisions. Lehigh Valley opened the season series with a 4-3 win at Floyd L. Maines Veterans Memorial Arena in Binghamton on October 21 and followed that up with a 6-5 triumph over the Devils on November 4. 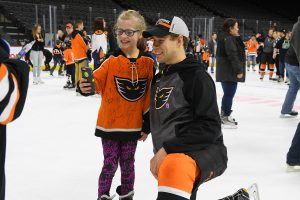 Wednesday’s game features a Post-Game Skate with Phantoms Players presented by Big Woody’s. Fans are encouraged to bring their skates to the game and hit the ice with the Phantoms immediately following the conclusion of Wednesday’s action. A limited number of tickets remain for Wednesday’s game and can be purchased online HERE.

Lehigh Valley continues this week’s action on Friday, December 1 as it welcomes the rival Hershey Bears to PPL Center for a 7:05 p.m. showdown. Hershey (9-9-0-3, 21 pts., 0.500 pts. pct., 6th Atlantic Division) claimed three of a possible six points going 1-1-1 in three games last week. The Bears earned a 4-1 triumph at the Hartford Wolf Pack on Saturday in between a 2-1 loss to the Springfield Thunderbirds on Wednesday and a 3-2 shootout defeat to the Bridgeport Sound Tigers on Sunday. Hershey enters the week having dropped three of its last four games and four of seven overall.

Friday’s clash will be the fourth of 12 regular season meetings between the Phantoms and Bears with Lehigh Valley having posted a 2-1 mark against its in-state rivals through the first three collisions. Lehigh Valley claimed the only prior meeting in downtown Allentown with a 7-2 victory back on Opening Night on October 7. The AHL’s leading scorer, Chris Bourque (27 points), leads all scorers in the season series with 6 points (goal, 5 assists) through the first three head-to-head meetings.

Friday’s game will be Superhero Night at PPL Center with special appearances from Batman, Wonder Woman, Spider-Man and Captain America. A limited number of tickets remain for Friday’s game and can be purchased online HERE. 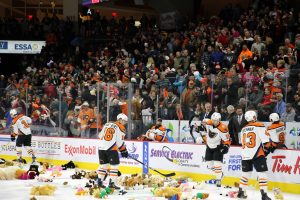 The Phantoms then cap this week’s action on Saturday, December 2 when they welcome the Laval Rocket to downtown Allentown for the first and only time this season. Laval (9-8-2-2, 22 pts., 0.524 pts., pct., 3rd North Division) dropped all three of its games last week and enters the week in the midst of a five-game winless skid (0-3-0-2). After a 3-2 shootout loss at the Manitoba Moose last Tuesday, the Rocket dropped a pair of 3-2 decisions at the Utica Comets on Friday and Saturday.

Saturday’s contest will mark the second and final meeting of the 2017-18 regular season between Lehigh Valley and Laval after the Phantoms captured a 5-2 win at Place Bell in Laval back on November 17. Mike Vecchione and Phil Varone each tallied two goals and an assist that evening in front of goaltender Dustin Tokarski who backstopped the win with a solid 28-save performance.

Saturday’s game is the highly-anticipated Teddy Bear Toss presented by Dan’s Camera City. Fans are encouraged to bring new teddy bears/stuffed animals to the game and throw them on the ice when the Phantoms score their first goal. All bears/stuffed animals will then be donated to Valley Youth House to be distributed to children across the Lehigh Valley. Only a limited number of tickets remain for Saturday’s game and can be purchased online HERE.

Corban Knight (2nd) and Greg Carey (6th) both scored and goaltender Alex Lyon turned in an impressive 34-save performance but the Wilkes-Barre/Scranton Penguins were able to prevail in a 4-2 decision inside Mohegan Sun Arena. Ryan Haggerty (2 goals, assist) and Jean-Sebastien Dea (goal, 2 assists) paced the offensive effort for the Penguins in front of netminder Casey DeSmith who earned the victory between the pipes after turning aside 31 of Lehigh Valley’s 33 total shots. 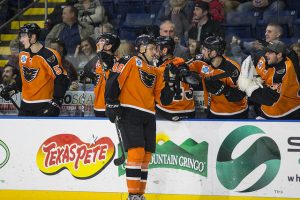 Greg Carey (7th, 8th) scored twice and Phil Varone (6th) added a goal and two assists as the Phantoms earned a come-from-behind 6-3 win over the Springfield Thunderbirds. Oskar Lindblom (4th) and Mark Alt (3rd) also found the back of the net for Lehigh Valley along with defenseman James de Haas who tallied his first career professional marker with the eventual game-winner notched 6:33 into the third period. 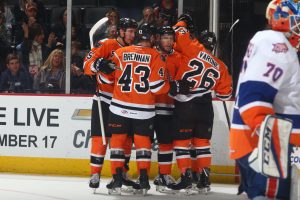 Will O’Neill (2nd, 3rd) scored two goals, including the game-winner in overtime, as the Phantoms rallied for a 5-4 victory over the visiting Bridgeport Sound Tigers in front of 8,022 fans inside PPL Center. Mark Alt (4th) and Nic Aube-Kubel (5th) also scored for Lehigh Valley in addition to Greg Carey (9th) who netted his fourth goal of the week. Goaltender Alex Lyon earned his seventh win of the season after turning aside 35 of Bridgeport’s 39 total shots.

Lehigh Valley’s special teams played a big part in the victory as the team’s power play went 1-for-5 while the penalty kill successfully thwarted all four of the Sound Tigers’ man-advantage opportunities.

Service Electric’s TV2 Sports will be broadcasting live each of the Phantoms’ 30 home games throughout the 2017-2018 regular season. If you can’t make it out to the rink, be sure to catch all the exciting action live in HD quality with Steve Degler, Todd Fedoruk, Doug Heater and Kristi Fulkerson! Pre-game coverage begins with “Phantoms Front and Center” 30 minutes before puck drop.