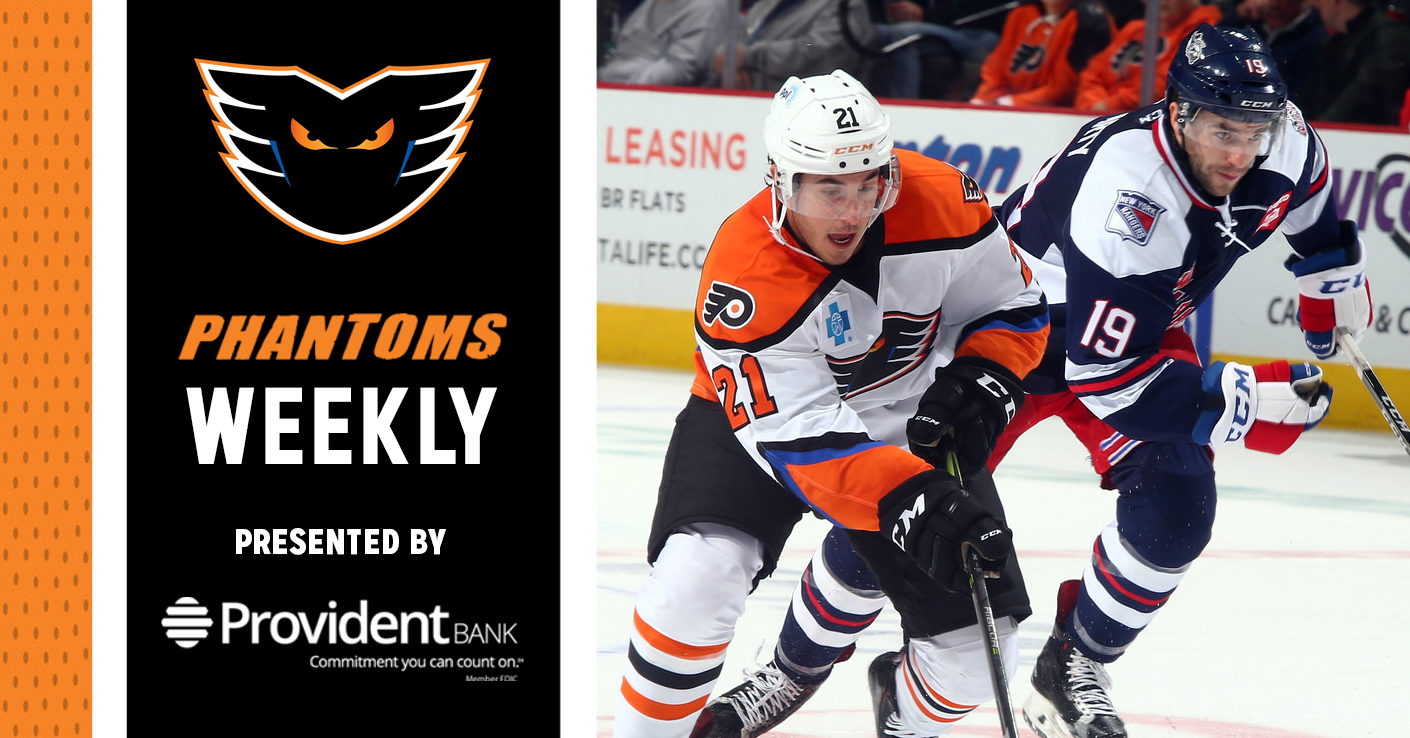 The Lehigh Valley Phantoms took on the rival Wilkes-Barre/Scranton Penguins for the first time this past Friday inside of PPL Center at the front end of a home-and-home series.  A back-and-forth affair throughout, Lehigh Valley received game-tying goals from both Mike Vecchione and Philippe Myers, but found themselves trailing 3-2 at the end of the second period.

Phantoms defenseman T.J. Brennan potted the 150th goal of his AHL career early in the third period to tie the game and then, about a minute later, assisted on Greg Carey’s fourth goal of the season to give Lehigh Valley their first lead of the contest at 4-3.  Wilkes-Barre/Scranton scored a pair of goals — including the game winner at the 18:47 mark of the third — to go on to win 5-4.

On Saturday, the Phantoms traveled up the Northeast Extension of the Pennsylvania Turnpike to rematch against the Penguins in Wilkes-Barre.  Although Lehigh Valley allowed two goals in the first half of the opening frame, Mark Friedman fired back, cutting the lead in half, when he collected a pass from Taylor Leier and wristed it home for his first goal of the season.

A pair of goals from rookie German Rubtsov — his second and third of the season — and another from Phil Varone had the Phantoms in front of the Pens 4-3 at the end of two.  Philippe Myers and Chris Conner tacked on two more goals in the third period en route to a 6-3 final.

Goaltender Alex Lyon, who made his first start of the season for the Phantoms, turned aside 42 shots to earn his first victory of the season while Rubtsov (2G), Leier (2A), Varone (1G-1A), Friedman (1G-1A) and Brennan (3A) all had multi-point games.

The black and orange capped off the weekend’s three-in-three with a Sunday afternoon game in Bridgeport.  The Phantoms came out of the gates hot as rookie David Kase netted the team’s first goal just 2:53 into the opening period.  Kase chipped in a centering feed from German Rubtsov on the power play marking the fifth power-play goal of the weekend for the Phantoms.  The team’s sixth power-play goal came off the stick of Phil Varone near the end of the opening frame creating a 2-0 lead heading into the second period.

From there, Bridgeport would tally three consecutive goals to take a 3-2 lead, the last of which came with just 2:45 remaining in the contest.  Just 38 seconds later, the Phantoms would answer back with a blast from the stick of T.J. Brennan — his seventh point of the weekend — to tie the game and head into overtime.

A scoreless overtime period would give way to a shootout where Bridgeport’s Chris Bourque netted the only goal to give the Sound Tigers a 4-3 victory. 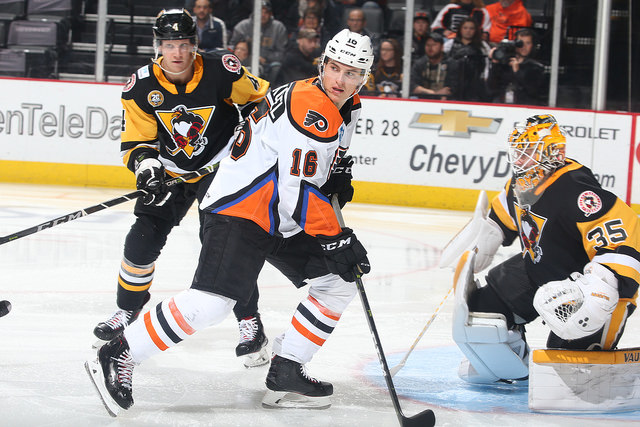 The Phantoms will travel to Hartford for their first midweek game of the season this Wednesday as they take on the Wolf Pack for the first time of 2018-19.  As of Tuesday, the Wolf Pack had command of third place in the Atlantic Division with a 4-3-1-0 record.  Hartford is coming off a week that saw them drop games to Laval (5-2) and Toronto (3-2), but also post a win against Belleville (4-3).

Despite being a team that struggled to stay over .500 during the 2017-18 season, the Wolf Pack somehow managed to post an undefeated record (6-0-0-0) against the Phantoms. All six games however, were decided by a single goal and five of those contests were finished in extra time (2 OT, 3 SO).

Saturday, Lehigh Valley will face it’s first test against the North Division when they travel to Binghamton to take on the Devils.  Binghamton, who finished 25-38-9-4 just a season ago, is currently in sixth place in the North with a record of 3-4-0-0.

The Devils, who as of Tuesday are currently on a three-game losing streak — which included a pair of 4-0 shutouts against Syracuse and, more recently, Cleveland — will be looking to get back in the win column with a midweek game against the Belleville Senators before hosting Charlotte on Friday and then the Phantoms on Saturday night.

In six contests against the Devils during 2017-18, the Phantoms managed an impressive 5-1-0-0 record.  Four players on the Lehigh Valley roster posted five or more points in the six games against Binghamton this past season including: Phil Varone (2G-6A), Chris Conner (4G-2A), Cole Bardreau (2G-3A) and Mike Vecchione (1G-4A).

Lehigh Valley will be in action again this Sunday, but this time will take on the rival Hershey Bears for the first time during the 2018-19 season.  Hershey, who has already played eight games this season, is currently in the basement of the Atlantic Division with a 2-5-0-1 record.

The Bears will look to find some momentum prior to facing the Phantoms on Sunday with a home-and-home series against Wilkes-Barre/Scranton.  As of Tuesday, Liam O’Brien (4G-1A) and Connor Hobbs (1G-4A) are tied for the team lead with five points each for Hershey.

Last season, Lehigh Valley produced a 10-2-0-0 record against the Bears and outscored them 50-34 in those 12 games.  Nic Aube-Kubel led the way for the Phantoms producing seven goals and five assists for 12 points in just 11 games against the Bears last season. 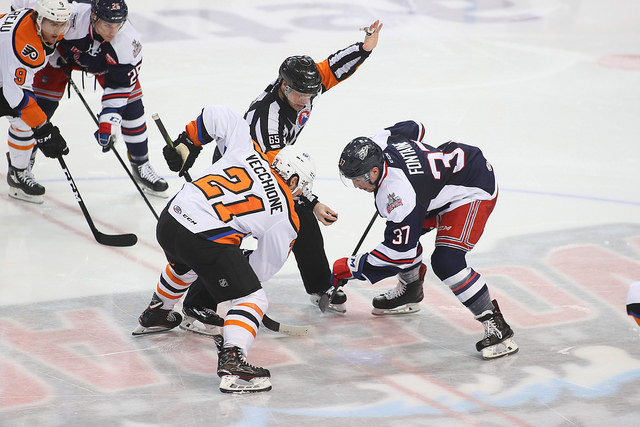 The Lehigh Valley Phantoms found the back of the net six times this past weekend while on the man advantage.  Overall the team finished 6 for 16 (37.5%) on the weekend, converting at a better rate than the number one ranked power play in the AHL of the Rochester Americans (35.3%).

Rookie Forward German Rubtsov netted a pair of goals against the Wilkes-Barre/Scranton Penguins on Saturday night in the Phantoms 6-3 victory.  The two goals helped mark both Rubtsov’s first multi-goal and multi-point game of his professional career.

October 23, 2018:  The Lehigh Valley Phantoms loaned defenseman David Drake to the Reading Royals of the ECHL