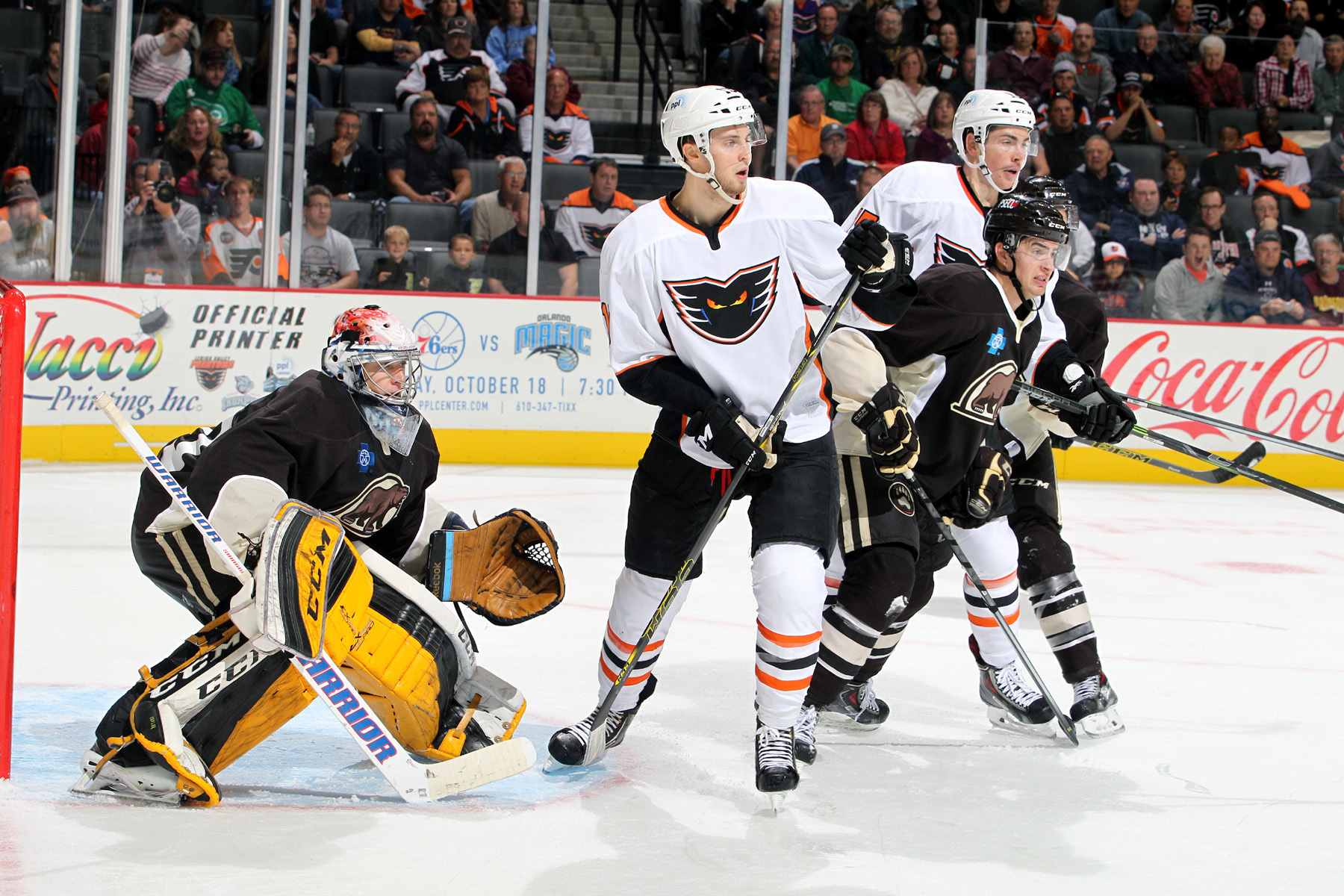 This Week
Friday, October 24 (7:05 PM) – Hershey Bears @ Lehigh Valley Phantoms
(The Phantoms and Bears renew one of the best rivalries in hockey!)

The Phantoms prepare for their first three-game week of the 2014-2015 regular season as Lehigh Valley gets set for a trio of showdowns against East Division opponents. The busy slate begins this Friday as the Phantoms return to PPL Center for a 7:05 PM showdown against the Hershey Bears. Friday’s tilt is just the team’s second regular season match-up at PPL Center following a standing-room only sellout last Friday evening where 8,647 raucous fans witnessed a thrilling 4-3 overtime triumph by the Phantoms over the Adirondack Flames.

Tickets for Friday’s highly-anticipated rivalry showdown with Hershey are on sale now at the Mealey’s Furniture Box Office at PPL Center (701 Hamilton Street), by calling 610-347-TIXX (8499) or online at pplcenter.com.

Lehigh Valley then hits the road for the final two games of the week as the Phantoms head to Binghamton Saturday for a 7:05 PM clash with the Senators before skating over to Hershey on Sunday for a 5:00 PM rematch with the Bears.

Friday’s and Sunday’s showdowns with Hershey will be the 185th and 186th all-time meetings, respectively, between the Phantoms and Bears. The Phantoms are 86-88-10 all-time against the Bears and split the six head-to-head meetings with Hershey a season ago. The Bears (3-1, 6 pts.) enter the week in first place in the East Division but have already played one more game than the Phantoms. Meanwhile, as the Adirondack Phantoms last year, the team went 4-2 in six outings against Binghamton.

The state-of-the-art PPL Center has a sellout capacity of 8,420 fans for hockey games and features 26 Luxury Suites, 6 Party Suites, 4 Ice Suites and the incredibly unique BSI Suite, which offers fans the opportunity to be face-to-face with the Phantoms as they exit their locker room and head out onto the ice! What’s more, the PPL Center also features a four-panel, center-hung, high-definition video scoreboard.

The Lehigh Valley’s support of Phantoms hockey was overwhelming last week as the team enjoyed a standing-room sellout crowd of 8,647 fans at the team’s first regular season game at PPL Center. The crowd not only exceeded the fixed-seat capacity for hockey games at PPL Center but it was also the largest crowd at any of the American Hockey League’s 32 games last weekend.

Goaltender Rob Zepp earned the win in goal thanks to 29 saves on 32 total shots. Lehigh Valley registered the game’s opening goal for the second consecutive tilt while the Phantoms produced multiple power play tallies for the second straight game as well.

Lehigh Valley earned a split in its home-and-home series with the Flames following a 4-2 setback in Adirondack on Saturday. The Phantoms returned to the Glens Falls Civic Center where the franchise spent the last five seasons and saw rookie center Scott Laughton net a pair of goals for the second consecutive night before Adirondack pulled free for a 4-2 win. Rookie netminder Anthony Stolarz made his professional debut in goal and turned in an impressive 32 saves on 35 shots.

Yesterday, the American Hockey League named Phantoms forward Scott Laughton the CCM/AHL Player of the Week for the period ending October 19, 2014. Laughton recorded four goals, including two power play tallies and one shorthanded marker, in just two games last weekend as the Phantoms earned a split in their home-and-home series with the Adirondack Flames.

A native of Oakville, Ontario, Laughton opened the weekend with a pair of goals in Lehigh Valley’s dramatic 4-3 overtime victory on Friday before netting another two goals in the team’s 4-2 setback in Adirondack on Saturday. All told, the 20-year-old pivot leads all Phantoms and is tied for second among all AHL skaters with four goals. A first-round selection (20th overall) by the Philadelphia Flyers in the 2012 NHL Entry Draft, Laughton spent last season with the Oshawa Generals of the Ontario Hockey League (OHL) where he was a First Team All-Star after registering 40 goals and 87 points in 54 games.

The Phantoms and Bears will become very familiar with one another as the 2014-15 season moves along. The East Division rivals already met twice during the preseason and will face off a total of 12 times throughout the course of the regular season. From October to April, not a single month goes by without a head-to-head meeting between the Phantoms and Bears with a season-high three showdowns set for the month of January.

There will also be some player familiarity when the Phantoms and Bears collide this weekend. Lehigh Valley’s alternate captain Andrew Gordon spent four seasons with Hershey from 2007 to 2011. During that time, the Halifax, Nova Scotia native recorded 102 goals and 224 points in 267 games and finished in the top-three in team scoring twice. Meanwhile, the Bears’ leading scorer, Kris Newbury, spent part of last season with the Phantoms where he produced 14 goals, 36 points and 182 penalty minutes in 46 games while with Adirondack.

Service Electric’s TV2 Sports will be broadcasting live all of the Phantoms’ 37 remaining regular season home games. If you can’t make it out to the rink, be sure to catch all the exciting action in high definition with Steve Degler and former Flyers and Phantoms goaltender Brian Boucher! And don’t miss “Phantoms – Breaking the Ice” every Monday from 7:00 – 8:00 PM throughout the season live at Chickie’s & Pete’s (701 Hamilton Street)!

Tickets for all of the Phantoms’ 37 remaining regular season home games, including this Friday’s highly-anticipated rivalry showdown with Hershey, are on sale now at the Mealey’s Furniture Box Office at PPL Center (7th & Hamilton), by calling 610-347-TIXX (8499) or online at pplcenter.com.