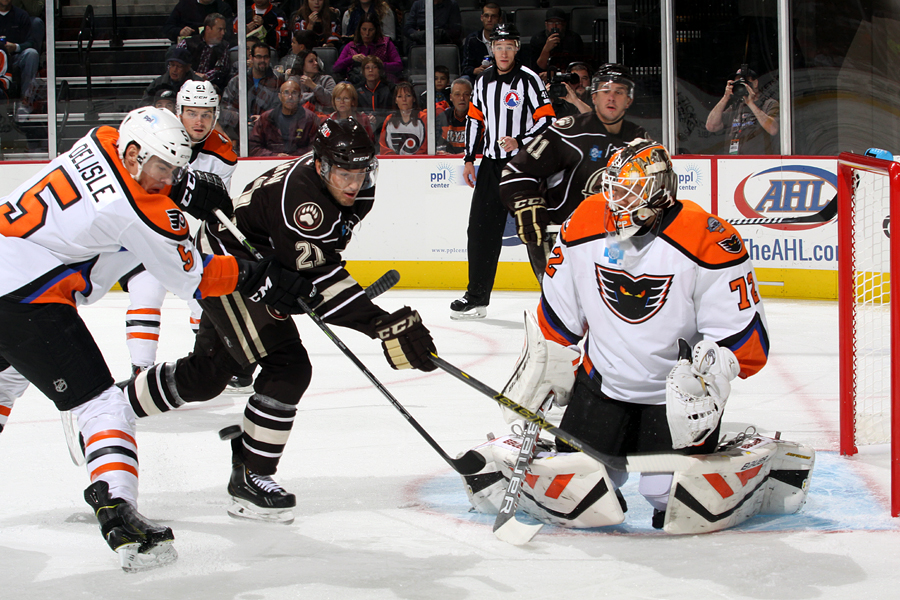 Lehigh Valley, PA – The Lehigh Valley Phantoms, proud AHL affiliate of the Philadelphia Flyers, scored three goals in the final six minutes Friday evening to earn a come-from-behind 4-2 triumph over the Hershey Bears in front of 7,881 energized fans at PPL Center. With the win, the Phantoms improved to 3-1 overall on the young season and are a perfect 2-0 at the brand-new PPL Center. Through the first two games in their new home, Lehigh Valley has already enjoyed the company of more than 16,500 total fans.

“The goals were not because of high-end skill,” Phantoms head coach Terry Murray said. “That was hard work. That was going after it, getting on the puck, recovering pucks, taking the body. A lot of hard work led to every one of those goals. It’s very difficult to come back from a 2-1 deficit and to see that happen today that was well earned.”

Trailing 2-1 with six minutes remaining in the final period, the Phantoms’ three-goal outburst in under two minutes brought the energy in the building to a fever pitch. Taylor Leier’s first pro goal to tie the score was followed in short order by the second of the game from Darroll Powe. Then it was Petr Straka’s breathing-room tally a minute later to close the night.

The comeback was made possible due in large part to Rob Zepp’s spectacular goaltending. On his way to a 29-save evening, Zepp got better and better as the night progressed eventually making some of his most spectacular saves in the crucial third period when the Phantoms were trying to stay within striking distance.

The hard work began early in a first period that featured nearly non-stop action with only a handful of whistles during the 20-minute segment and was puncuated by a bone-crushing hit from Brandon Alderson that brought the PPL Center crowd to its feet. The Bears responded with the game’s opening goal and the only conversion of the first period when former Phantom Kris Newbury slipped behind the Lehigh Valley defense before backhanding in his fourth goal of the season.

The excitement and tenacity of the first period carried over into the middle stanza and boiled over just 3:05 into the second frame when history was made when Lehigh Valley’s Jay Rosehill and Hershey’s Tim Spencer threw down in the first-ever regular season fight at PPL Center. Rosehill, a proven heavyweight at both the AHL and NHL levels, increased his career professional penalty minutes total to 1,420 with the scrap.

The Phantoms channeled the momentum gained from the fight and ensuing raucous response from the fans in leveling the tilt just past the midway point of the contest when, while on the power play, Darroll Powe expertly redirected Robert Hagg’s shot from the left point past Hershey goaltender Philipp Grubauer and into the back of the Bears net. Brandon Manning earned the secondary assist on the man-advantage marker which was Lehigh Valley’s sixth power play conversion in just four games. The Phantoms have now scored on the man advantage in three of their first four games overall and three times in two home games while on the PPL power play.

The Bears responded with a man-advantage marker of their own just over three minutes later when Casey Wellman pounced on a blocked shot before sending in his fourth goal of the year. Tomas Kundratek and Connor Carrick assisted on the power play conversion netted 14:14 into the second period.

The action didn’t stop there though. The amped-up PPL Center crowd was treated to a back-and-forth third period, which started with the second tussle of the night just 5:05 into the final frame when the Phantoms’ Steven Delisle squard off against the Bears’ Garrett Mitchell.

“Whenever you have players respond like that, it’s effects the bench big time,” Murray said. “It has a way of igniting a certain kind of feeling on the bench and the guys are ready to get going the next shift.”

The near-capacity crowd then watched Lehigh Valley blueliner Mark Alt preserve the one-goal difference with a spectacular goal line save on a puck that appeared destined for the back of the Phantoms’ net.

After his spectacular defensive play at one end, Alt responded with a sparkling offensive play at the other when he fed a perfect cross-ice pass to Taylor Leier on the left wing who made no mistake in punching in his first professional goal. Then, Powe registered his second goal of the game and the eventual game-winner with just over five minutes left in the game when the 29-year-old forward jumped on a rebound in the Hershey crease before slamming in his second goal of the year and sending the near-capacity PPL Center crowd into a frenzy. Lehigh Valley capped its offensive eruption less than a minute later when Petr Straka snapped in a sizzling wrist shot for his second goal of the season.

Phantoms goaltender Rob Zepp earned the victory in net after an impressive 29 saves on 31 shots. The 33-year-old netminder is now 3-0 on the young season. Meanwhile, Hershey’s Grubauer suffered the loss after 20 saves on 24 shots.

Lehigh Valley is back in action tomorrow when the Phantoms head to Binghamton for their first showdown of the year with the Senators. The puck drops at 7:05 PM and all the action can be heard live on Fox Sports 1470 AM beginning with the Nazareth Pallett Countdown to Faceoff at 6:20 PM. To conclude the Phantoms first three-in-three of the year will be a rematch with the Bears on Sunday at 5:00 this time at Giant Center in ChocolateTown as part of Hershey’s home-opening weekend.

The Phantoms return to PPL Center next Wednesday evening when they welcome the Wilkes-Barre/Scranton Penguins to town for the first time this year. Lehigh Valley also hosts the Hartford Wolf Pack, AHL affiliate of the New York Rangers, next Saturday, November 1. Tickets for the upcoming rivalry showdowns are on sale now at the Mealey’s Furtniture Box Office at PPL Center (701 Hamilton Street), by calling 610-347-TIXX (8499) or online at pplcenter.com.