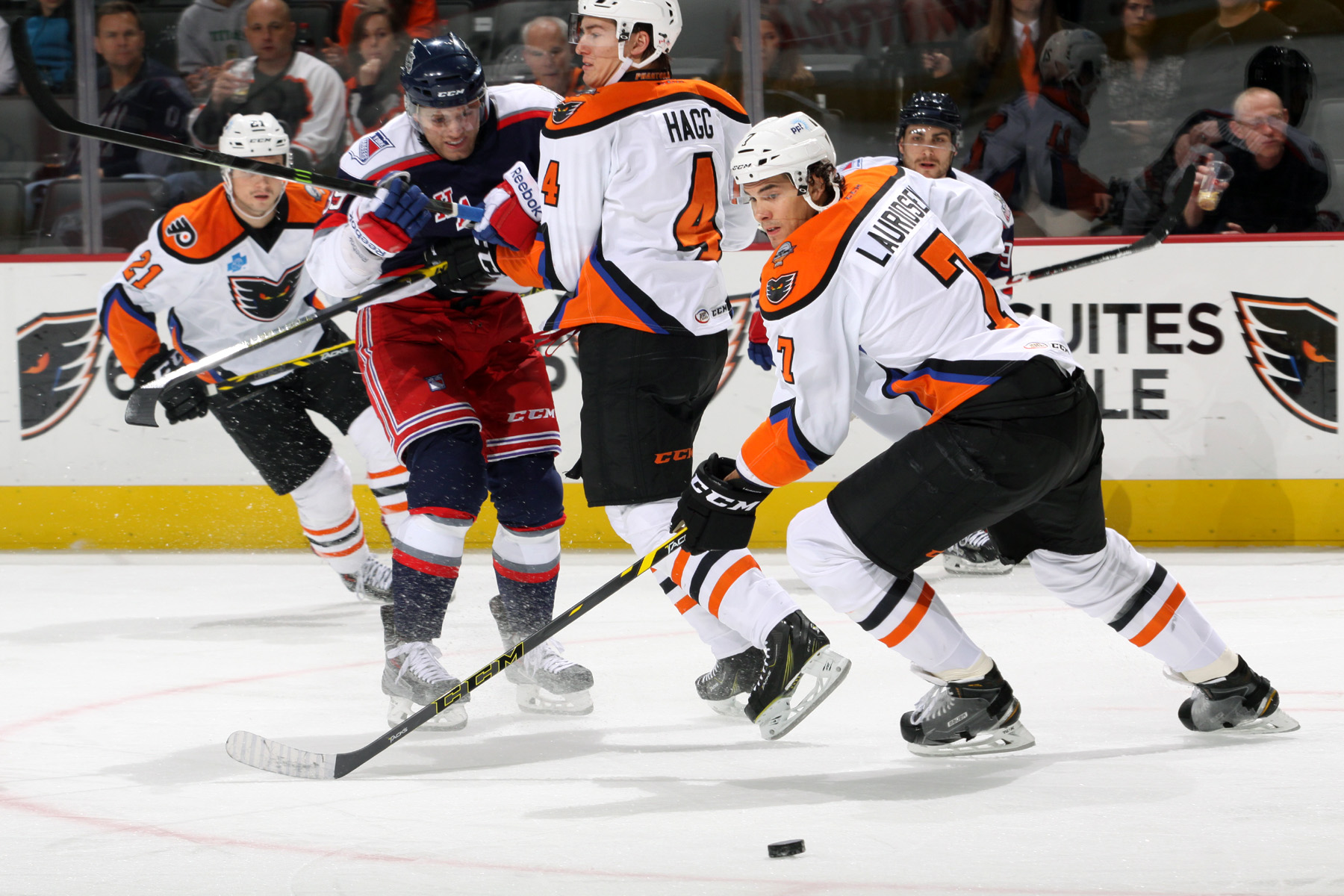 Saturday, February 21 (7:05 PM) – Hartford Wolf Pack @ Lehigh Valley Phantoms
(Legends Night! Frank “The Animal” Bialowas, one of the most feared players in Phantoms history, will be at the game. FREE Collector’s Edition Poster for all fans.)

The Lehigh Valley Phantoms are back in action for a trio of games at PPL Center this week. 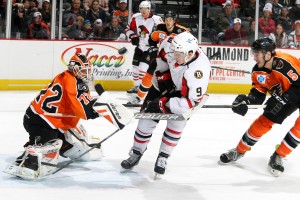 First, Lehigh Valley (24-21-4-1, 53 pts.) kicks off its busy stretch at home on Wednesday, February 18th when the Phantoms welcome the Binghamton Senators back to town. Wednesday’s contest marks the eighth of 10 total meetings during the 2014-2015 regular season between Lehigh Valley and Binghamton and the second collision in downtown Allentown between the East Division foes in the last six days. The Phantoms are 3-4 head-to-head against the Senators this season and are 2-1 against Binghamton at PPL Center. Lehigh Valley’s Nick Cousins (7 goals, 3 assists) and the Senators’ Shane Prince (5 goals, 5 assists) are tied for the scoring lead in the season series with 10 points each through the first seven get-togethers.

The Phantoms enter the week in sole possession of third place in the East Division and are presently just five points back of the Worcester Sharks for the eighth and final playoff spot in the Eastern Conference. Meanwhile, Binghamton (20-24-5-1, 46 pts.) is fifth among the five teams in the East and currently holds the lowest standings point total in the Eastern Conference. Following a 5-4 setback in Toronto on Monday, the Senators have dropped eight of their last 11 games overall (3-6-2).

Wednesday’s game is another $2 Beer Night with $2 Coors Light drafts available from the time doors open until the start of the 2nd period. 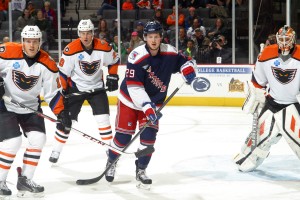 Lehigh Valley then returns to action on Friday, February 20th when it welcomes the Providence Bruins to town for the first and only time this season. Friday’s showdown is the first of just two head-to-head meetings between the Phantoms and Bruins this year with the series finale coming Friday, March 13th in Providence. Providence (26-19-6-1, 59 pts.) kicked off a busy four-game week yesterday with a 2-1 victory over the Eastern Conference-leading Manchester Monarchs. The Bruins are now alone in second place in the Atlantic Division and seventh overall in the East after capturing seven of their last 10 games overall (7-2-1).

The Phantoms then conclude their busy week at home on Saturday, February 21st when they welcome the Hartford Wolf Pack to PPL Center for the final time this season. Saturday’s contest marks the third of four total meetings between Lehigh Valley and Hartford this season with the Phantoms holding a 0-1-1 record head-to-head against the Wolf Pack. Hartford (28-15-4-3, 63 pts.) enters the week tied for second in the Northeast Division and tied for fourth overall in the Eastern Conference. The Wolf Pack snapped a four-game winless skid with a sweep of their home-and-home series last weekend against the Albany Devils and will head to Portland (Tuesday) and Springfield (Friday) before invading downtown Allentown on Saturday. 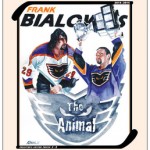 Saturday’s game is another Legends Night as Frank “The Animal” Bialowas, one of the most feared players in Phantoms history, will be at the game. All fans in attendance will receive a FREE Collector’s Edition Poster spotlighting Bialowas. A limited number of tickets for all three highly-anticipated showdowns are available now at the Mealey’s Furniture Box Office at PPL Center (701 Hamilton), by calling 610-847-TIXX (8499) or online at pplcenter.com. 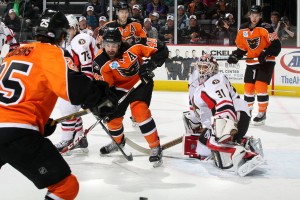 Jason Akeson notched a pair of assists while Nick Cousins and Brandon Manning each contributed a goal and an assist but the Binghamton Senators were able to hang on for a 3-2 win over the Phantoms in front of 8,782 fans at PPL Center. Lehigh Valley’s power play produced both goals in front of Rob Zepp who registered 29 saves on 32 Binghamton shots. 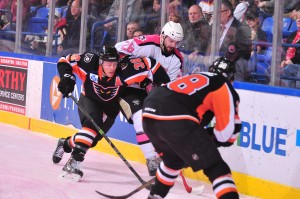 Taylor Leier and Petr Straka both scored in the shootout as the Phantoms outlasted the Penguins 5-4 in Wilkes-Barre/Scranton. Jason Akeson scored twice in regulation and Nick Cousins chipped in three assists as Lehigh Valley claimed its third straight victory over its in-state rivals.

Adam Comrie also recorded a goal and an assist while Brandon Manning contributed a pair of assists as the Phantoms improved to 5-1 in games decided via shootouts this season. Lehigh Valley’s man-advantage accounted for a pair of goals for the second straight night while Rob Zepp earned the win in net after 30 saves in regulation/overtime followed by another three denials in the shootout.

Andrew Gordon netted the game winner just 24 seconds into overtime as the Phantoms capped their 3-game weekend with a dramatic 5-4 victory at the Springfield Falcons. Zack Stortini scored twice in regulation while Taylor Leier opened the scoring on his 21st birthday. Jason Akeson also found the back of the net for the Phantoms as the 24-year-old winger extended his scoring streak to a season-high nine games.

Lehigh Valley’s power play went 1-for-7 in the triumph as the Phantoms landed a man-advantage marker for the fourth consecutive game in improving to 18-8 when scoring a power play goal this year. Meanwhile, Lehigh Valley improved to 5-4 in games decided in overtime and 14-5-4-1 in one-goal affairs this season.

Service Electric’s TV2 Sports will be broadcasting live all of the Phantoms’ 15 remaining regular season home games. If you can’t make it out to the rink, be sure to catch all the exciting action in high definition with Steve Degler and former Flyers and Phantoms goaltender Brian Boucher! And don’t miss “Phantoms – Breaking the Ice” every Monday from 7:00 – 8:00 PM throughout the season live at Chickie’s & Pete’s (701 Hamilton Street)!

Tickets for all of the Phantoms’ 15 remaining regular season home games are available now at the Mealey’s Furniture Box Office at PPL Center (7th & Hamilton), by calling 610-347-TIXX (8499) or online at pplcenter.com.