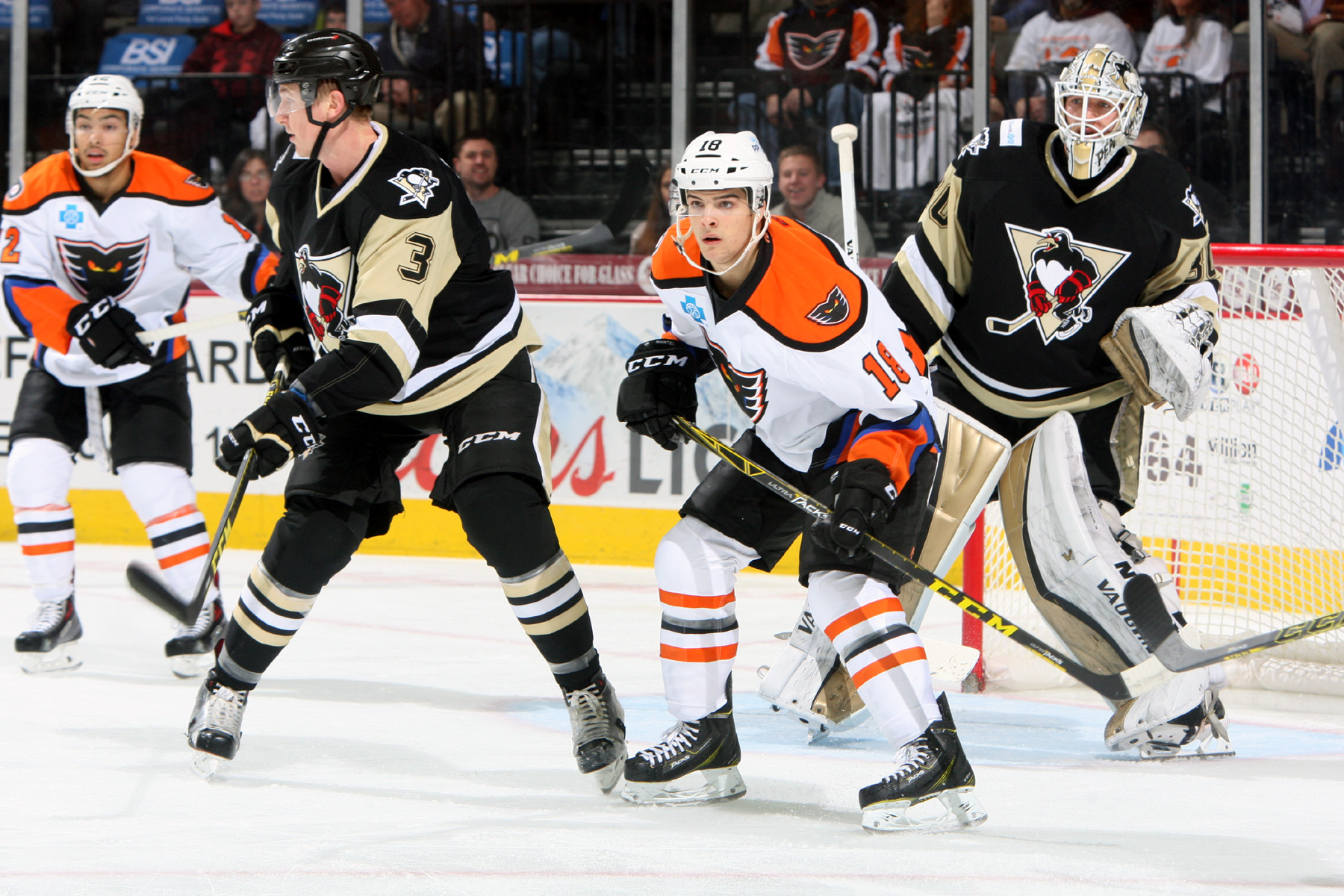 Coming off a pair of wins in three games to kick off a five-game stretch at PPL Center, the Lehigh Valley Phantoms (13-13-1-0, 27 pts.) continue their holiday home stand with a pair of rivalry showdowns in downtown Allentown this week. The Phantoms do so in fourth place in the Atlantic Division with the top four teams in each division set to qualify for the 2016 Calder Cup playoffs. 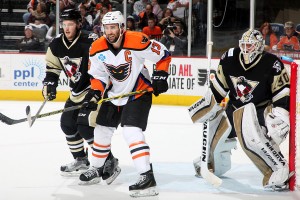 First, on Wednesday, December 16, Lehigh Valley welcomes the Wilkes-Barre/Scranton Penguins back to PPL Center. Wilkes-Barre/Scranton (19-5-0-0, 38 pts.) enters the week atop the Atlantic Division and with the highest points percentage (.792) in the American Hockey League. The Penguins claimed each of their three games last week, including back-to-back 4-0 shutout victories over the Phantoms and Albany Devils on Friday and Saturday after Wilkes-Barre/Scranton opened the week with a 6-2 triumph over the Syracuse Crunch.

Wednesday’s contest, which is Military Appreciation Night at PPL Center, marks the fourth of 12 total meetings during the 2015-2016 regular season between the Phantoms and Penguins and the second to take place in downtown Allentown.

Then, on Friday, December 18, Lehigh Valley concludes its season-high five-game home stand in a tilt against the Hershey Bears. Hershey (14-6-1-5, 34 pts.) enters the week second in the Atlantic Division and earned a pair of victories in three outings a week ago. After falling in a 3-2 overtime decision in downtown Allentown on Wednesday, the Bears responded with a 5-2 win at home over the Binghamton Senators on Friday followed by a 2-1 shootout victory at the Bridgeport Sound Tigers on Saturday. Hershey enters the week having won four of its last five games overall.

Friday’s collision will mark the sixth of 12 total meetings this year between the Phantoms and Bears with Lehigh Valley holding a 3-2 mark against its in-state rival.

Friday’s game, which is presented by PPL, will also feature a Youth Winter Hat Giveaway presented by PPL Corporation where the first 2,500 kids 14 and under will receive a free Phantoms youth winter hat.

Tickets for both games this week, along with each of the Phantoms’ 24 remaining home games, are currently available at pplcenter.com, by calling 610-347-TIXX [8499] or in-person at the Mealey’s Furniture Box Office at PPL Center [701 Hamilton Street].

Lehigh Valley then plays its final game before the AHL’s holiday break on Saturday, December 19 when the Phantoms travel to Binghamton for a 7:05 p.m. showdown with the Senators. Binghamton (6-15-2-0, 14 pts.) is currently seventh among the seven teams in the North Division and enters the week having dropped seven of its last eight games overall. In just two games last week, the Senators lost a 4-3 decision at the Springfield Falcons on Friday before falling in a 5-3 loss in Hershey on Saturday.

Saturday’s contest will mark the third of eight total meetings during the 2015-16 regular season between Lehigh Valley and Binghamton with the two sides having split the first two meetings. After dropping a 4-1 decision at home on November 8, the Phantoms rebounded in the season series with a 6-3 victory just three days late.

Petr Straka and Danick Martel netted equalizing tallies in the third period before Nick Cousins buried the overtime winner in a come-from-behind 3-2 triumph over the Hershey Bears at PPL Center. Martel (goal, assist) and Taylor Leier (2 assists) registered multi-point efforts in the victory while Anthony Stolarz backstopped the win with 19 saves on 21 Hershey shots.

The Phantoms limited the Wilkes-Barre/Scranton Penguins to a season-low 20 shots on goal, but it wasn’t enough as the Penguins were able to outlast Lehigh Valley 4-0 at PPL Center. Dominik Simon and Scott Wilson each scored twice for Wilkes-Barre/Scranton while Matt Murray earned his fourth shutout of the season as he turned away each of the Phantoms’ 23 total shots on goal. 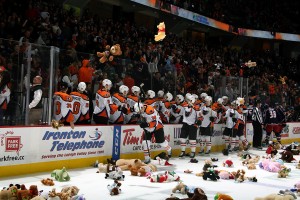 Andrew MacDonald scored twice in regulation before Taylor Leier and Petr Straka capped a dramatic 5-4 shootout win over the Springfield Falcons in front of a standing room-only crowd of 8,439 fans at PPL Center on Saturday. Leier also converted in regulation, as did Danick Martel, as Lehigh Valley garnered its 13th win of the season.

Anthony Stolarz backstopped the triumph with 33 saves in regulation and overtime before a perfect 2-for-2 performance in the shootout. The Phantoms also dominated the special teams going 2-for-5 on the power play alongside a perfect 5-for-5 display on the penalty kill.

Service Electric’s TV2 Sports will be broadcasting live all of the Phantoms’ 24 remaining regular season home games. If you can’t make it out to the rink, be sure to catch all the exciting action live in HD quality with Steve Degler, Peter Zingoni, Doug Heater and Kristi Fulkerson! Pre-game coverage begins with “Phantoms Front and Center” 30 minutes before puck drop. And don’t miss “Phantoms – Breaking the Ice” every Monday from 7:00 – 7:30 p.m. throughout the season live at Chickie’s & Pete’s at PPL Center!

Tickets for all of the Phantoms’ 24 remaining regular season home games are available now online at pplcenter.com, by calling 610-347-TIXX [8499] or in-person at the Mealey’s Furniture Box Office at PPL Center (7th & Hamilton).