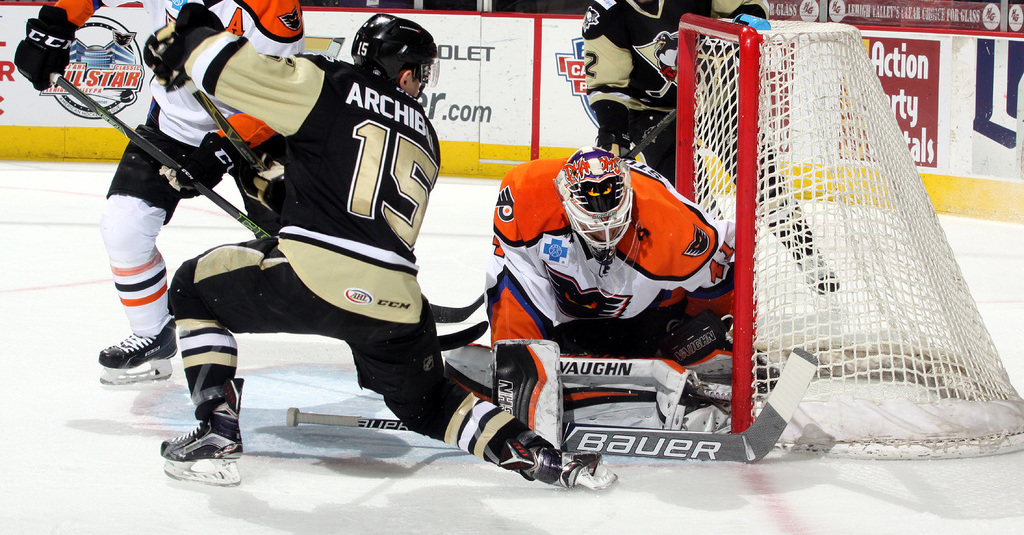 Lehigh Valley, PA – The AHL All-Star Classic may not be coming to Lehigh Valley until January 2017 but Phantoms goaltender Anthony Stolarz showed why he was a representative at this season’s edition as he authored a phenomenal 40-save performance Friday evening in the final rivalry showdown of the year between the Phantoms and Wilkes-Barre/Scranton Penguins. Despite Stolarz’s heroics, the visiting Penguins escaped with a 2-1 win in front of 8,433 fans at PPL Center. 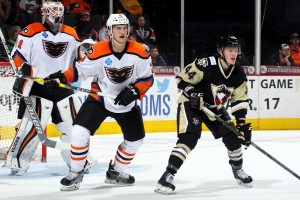 For Stolarz, it was his fourth 40-save performance of the season and highest save total since he established a new Phantoms’ franchise record with 51 saves in the team’s 3-2 shootout triumph at the Syracuse Crunch on March 2.

Friday’s contest marked the final rivalry showdown of the 2015-2016 season between Lehigh Valley and Wilkes-Barre/Scranton as the Phantoms finished the relentless 12-game series with a 5-6-1 mark against their in-state rivals. 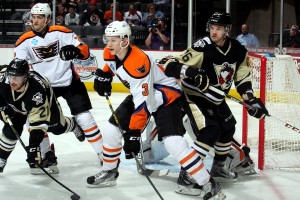 Robert Hagg landed his fifth goal of the season for Lehigh Valley as the budding defensive prospect found the back of the net for the third time in his last six games.

Despite Friday evening’s decision, Lehigh Valley has won six of its last eight games overall as the Phantoms are closing the 2015-16 campaign with some of their best hockey of the season. Over the team’s last eight games, Lehigh Valley has outscored its opposition 26-14 while the team’s penalty kill has successfully thwarted 36 of 37 man-down scenarios during that stretch.

Jean-Sebastien Dea (20th) and Jake Guentzel (2nd) provided the offense for Wilkes-Barre/Scranton while Casey DeSmith earned the win in goal with 26 saves on 27 Phantoms shots.

Friday’s game began with a moving video tribute followed by a moment of silence in remembrance of Philadelphia Flyers’ Founder and Owner Ed Snider who passed away earlier this week. Snider contributed immensely to the growth of the National Hockey League and hockey at all levels in and around Philadelphia and was also responsible for the beginning of the expansion Philadelphia Phantoms in 1996.

The Phantoms opened the scoring just over three minutes into the contest when a blistering slap shot from the left point by Hagg sizzled into the back of the Wilkes-Barre/Scranton cage. Tim Brent and Adam Comrie assisted on Hagg’s fifth goal of the season, which came at even strength 3:12 into the first period. The early conversion marked the seventh time over the last eight games in which Lehigh Valley has netted the game’s opening tally.

The Penguins were quick to respond though as Wilkes-Barre/Scranton leveled the contest a little over two minutes later when Jean-Sebastien Dea expertly redirected Will O’Neill’s left point offering for his 20th goal of the year. Dominik Simon collected the secondary assist on the five-on-five strike netted 5:16 into the opening frame.

Neither side was able to find the back of the net in the middle stanza despite a combined 21 shots on goal. Stolarz continued his sensational play between the pipes as he denied all 14 Penguins shots in the second period. Meanwhile, DeSmith turned aside each of Lehigh Valley’s seven middle frame offerings, including a point-blank chance from Nic Aube-Kubel who executed a breathtaking rush in creating one of the period’s premier scoring opportunities.

Wilkes-Barre/Scranton broke the deadlock and grabbed the lead for good just prior to the midway point of the third period when, parked just atop the Phantoms goal crease, Jake Guentzel redirected Carter Rowney’s slot shot just past the outstretched glove of Stolarz and inside the right post. Tom Kostopoulos collected the second assist on Guentzel’s second goal in nine games since joining the Penguins from the University of Nebraska-Omaha. The even-strength strike came 7:46 into the final frame in regulation.

Neither power play factored into the decision as the Phantoms went 0-for-2 with the man-advantage while Wilkes-Barre/Scranton failed to convert in its three power play chances.

The Phantoms are back in action on Saturday, April 16 when Lehigh Valley hits the road for the final time this season as the team invades the Giant Center in Hershey for a 7:00 p.m. showdown with the Bears. Be sure to catch all the action on FOX 1470-AM, online at www.fox1470.com or via the iHeartRadio app beginning with “Countdown to Faceoff” at 6:20 p.m.

The Phantoms then cap the 2015-2016 regular season on Sunday, April 17 when they welcome the Syracuse Crunch, the AHL affiliate of the Tampa Bay Lightning, to PPL Center for a 5:05 p.m. contest. Don’t miss the final chance this season to catch the heart-pumping excitement of Phantoms hockey live in downtown Allentown. A limited number of tickets remain for Sunday’s regular season finale and can be secured online at pplcenter.com, by calling 610-347-TIXX or in-person at the Mealey’s Furniture Box Office at PPL Center [701 Hamilton Street].