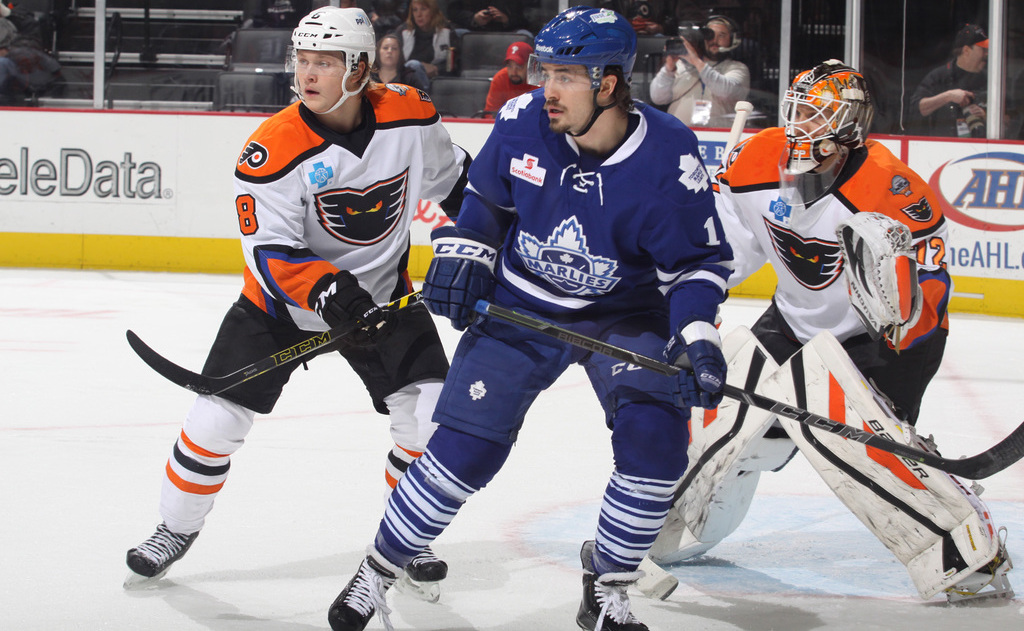 The Lehigh Valley Phantoms continue their push towards the 2015 Calder Cup Playoffs this week as the team kicks off a season-high five-game road trip with three games in four days. 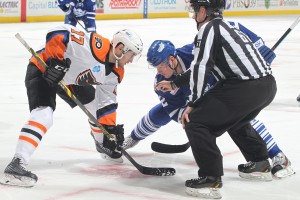 The Phantoms begin their road swing on Wednesday when they invade the Ricoh Coliseum in Toronto for their final meeting of the 2014-2015 regular season with the Marlies. Lehigh Valley claimed the only prior meeting against Toronto with a 3-2 triumph at PPL Center back on November 15th. Brandon Manning tallied the game winner with a five-on-three power play marker with less than four minutes remaining in regulation while Rob Zepp backstopped the Phantoms to victory with 28 saves on 30 Marlies shots. Scott Laughton and Nick Cousins also scored for Lehigh Valley in the win.

Lehigh Valley (26-24-6-1, 59 pts.) enters the week in sole possession of third place in the East Division and is presently nine points back of Worcester for the eighth and final playoff spot in the Eastern Conference with a game-in-hand on the Sharks. Meanwhile, Toronto (27-22-9-0, 63 pts.) is tied for third among the five teams in the North Division and enters the week just one point back of the Texas Stars for the final postseason berth in the Western Conference. After hosting Lehigh Valley, the Marlies will head to Adirondack on Saturday before closing this week’s action at the Hamilton Bulldogs on Sunday.

The Phantoms then continue their road trip on Friday when the team heads to the Dunkin Donuts Center in Providence for their second and final meeting this year with the Bruins. Providence claimed the only prior get-together with a 5-1 win at PPL Center back on February 20th. Petr Straka netted the only goal for Lehigh Valley that evening while Colin Stuart and Ryan Spooner paced the offensive attack for the Bruins with two goals each.

Providence (32-20-7-1, 72 pts.) enters the week in the midst of a five-game winning streak during which the Bruins have outscored their opposition 15-8. As a result of its recent surge, Providence is currently second in the Atlantic Division and fifth overall in the Eastern Conference. After facing the Phantoms on Friday, the Bruins will head to Springfield on Saturday to battle the Falcons before capping their three-game weekend with a home showdown against the Norfolk Admirals on Sunday. 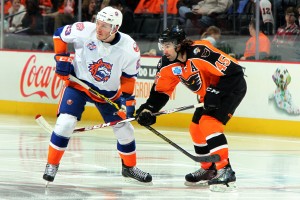 Bridgeport (22-29-6-1, 51 pts.) is fifth among the five teams in the Northeast Division and is currently tied with Norfolk for the lowest standings point total in the Eastern Conference. The Sound Tigers snapped a season-high ten-game losing skid on Saturday with a 4-3 victory at Worcester and will host the Sharks (Wednesday) and Syracuse Crunch (Sunday) around their meeting with the Phantoms this week. 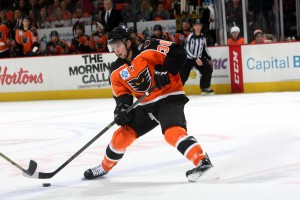 Jason Akeson scored just 48 seconds into overtime as the Phantoms outlasted the Bridgeport Sound Tigers 2-1 in front of 8,706 fans at PPL Center. The goal was Akeson’s team-leading 18th conversion this year as Lehigh Valley captured its seventh overtime victory and 12th post-regulation triumph of the season.

Brett Hextall scored in regulation for the Phantoms while Rob Zepp earned his 15th win of the year between the pipes with 26 saves on 27 Sound Tigers shots. Lehigh Valley’s power play went 1-for-5 in the win while the Phantoms’ penalty kill held its opposition off the board for the fourth consecutive game. The victory came in front of Lehigh Valley’s fourth straight sellout and 16th capacity crowd overall. 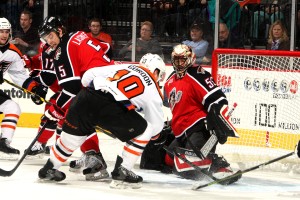 Andrew Gordon scored twice and Adam Comrie notched a goal and an assist but the Portland Pirates were able to hang on for a 5-4 win in front of 8,843 fans at PPL Center. Austin Fyten and Kevin Goumas each contributed a pair of assists for the Phantoms as Lehigh Valley skated in front of its fifth consecutive standing room-only sellout and the fifth-largest crowd to enjoy a Phantoms game at PPL Center this season.

Scott Laughton found the back of the net as well for the Phantoms as the blossoming 20-year-old prospect converted for the first time since returning from a 31-game stint with the Philadelphia Flyers. Rob Zepp suffered the setback in goal for Lehigh Valley despite 27 total saves. Meanwhile, Alexandre Bolduc paced the offensive effort for Portland with a goal and two assists while Dylan Reese, Jordan Martinook and Eric Selleck each recorded a pair of assists for the Pirates.

Service Electric’s TV2 Sports will be broadcasting live all of the Phantoms’ nine remaining regular season home games. If you can’t make it out to the rink, be sure to catch all the exciting action in high definition with Steve Degler and former Flyers and Phantoms goaltender Brian Boucher! And don’t miss “Phantoms – Breaking the Ice” every Monday from 7:00 – 8:00 PM throughout the season live at Chickie’s & Pete’s (701 Hamilton Street)!