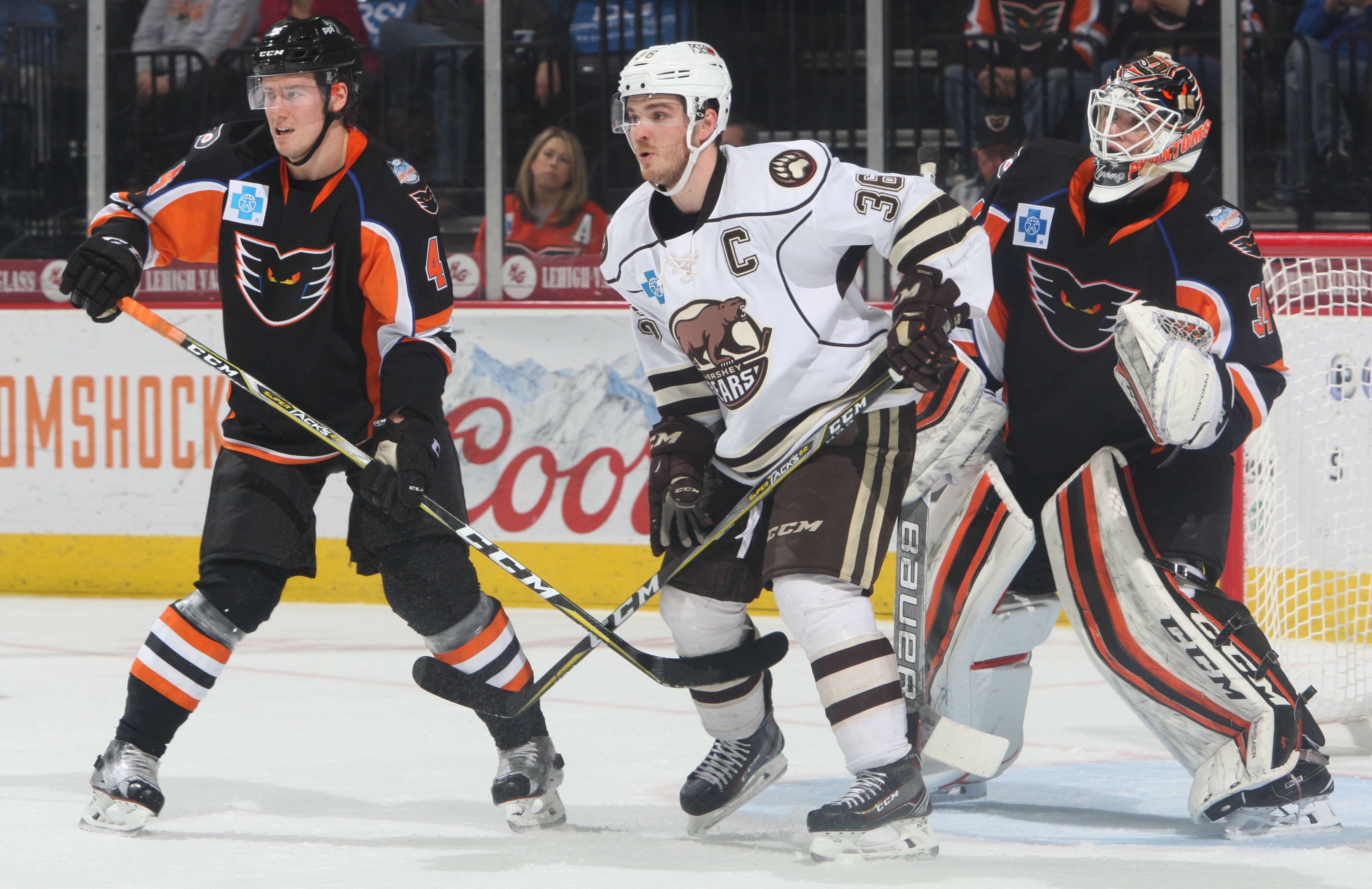 Lehigh Valley, PA – Taylor Leier (11th) and Colin McDonald (24th) both converted for the Lehigh Valley Phantoms Wednesday evening as the Phantoms earned a critical standings point amidst their overtime showdown with the rival Hershey Bears. With Wednesday’s outcome, the Phantoms moved to 44-22-5 overall this season as Lehigh Valley trimmed its magic number (standings points needed to guarantee a berth in the 2017 Calder Cup Playoffs) down to just five. 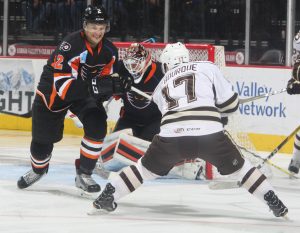 Wednesday’s rivalry clash was a thrilling back-and-forth affair that saw both the Phantoms and Bears hold the lead at different points in the game before Hershey’s Travis Boyd netted the game-winning conversion 3:41 into overtime. Tonight was the final meeting of the 2016-17 regular season between the Phantoms and Bears as Lehigh Valley closed the season series with an impressive 7-4-1 mark against its in-state rivals.

Meanwhile, McDonald remained second among all Phantoms and is now tied for 14th among all AHLers with 24 goals this season. 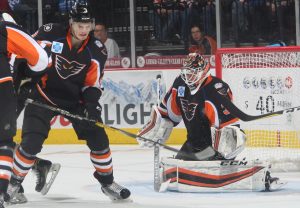 Fresh off his NHL debut last evening in Philadelphia’s 1-0 overtime setback at the New Jersey Devils, Samuel Morin returned to the Lehigh Valley lineup and garnered an assist in his return with the primary helper on McDonald’s conversion. A first-round selection (#11 overall) by the Flyers in the 2013 NHL Entry Draft, Morin has compiled 16 points (3 goals, 13 assists) in 69 with the Phantoms this year.

Goaltender Alex Lyon turned in another impressive performance between the pipes for Lehigh Valley as he turned aside 26 of Hershey’s 29 total shots.

Boyd (16th), Riley Barber (12th) and Liam O’Brien (10th) provided the offense for the Bears Wednesday evening in front of Pheonix Copley who earned the victory in goal with a strong 28-save performance. 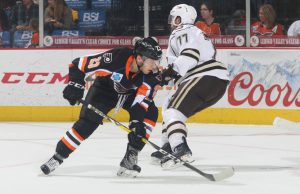 Hershey opened the scoring late in the first period when a clean face off win by Boyd in the offensive zone generated a quick chance for Jakub Vrana producing a rebound atop the goal crease, which was promptly deposited by O’Brien for his 10th goal of the season. Boyd and Vrana assisted on the even-strength strike netted 19:00 into the opening stanza.

The Phantoms bounced right back though and leveled the contest a little better than three minutes into the second period when, while on the power play, Leier expertly redirected Scott Laughton’s slap pass from the left point for his 11th goal of the year. Travis Sanheim garnered the secondary assist on the man-advantage marker tallied 3:14 into the middle period. The assists for Laughton and Sanheim were their 34th points of the year moving them into a tie with Mark Zengerle on the club’s scoring chart. A first-round selection (#17 overall) by the Philadelphia Flyers in the 2014 NHL Entry Draft, Sanheim is now sixth among all first-year AHL blueliners in total scoring with 34 points (10 goals, 24 assists). 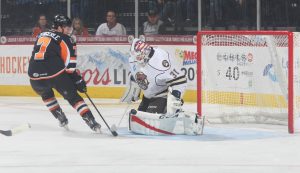 Lehigh Valley then grabbed its first lead of the night just prior to the midway point of the third period when Morin’s left point shot was altered en route by McDonald for his 24th goal of the season. Leier collected the secondary assist on the five-on-five conversion tallied 8:34 into the final frame of regulation.

Hershey remained resilient though and tied the contest at two apiece just over five minutes later when Barber’s wrist shot from the slot eluded Lyon’s glove before settling in the back of the cage. Tom Gilbert and Christian Djoos assisted on the equalizing marker notched 13:47 into the third period.

The Bears then landed the evening’s final strike 3:41 into overtime when Boyd barreled to the front of the Lehigh Valley net before chipping in his 16th goal of the season. Barber grabbed the only assist on the game-winning tally.

The Phantoms continue their push towards the 2017 Calder Cup Playoffs with two games at PPL Center this weekend. Lehigh Valley returns to the frozen surface this Friday, April 7 as it welcomes the rival Wilkes-Barre/Scranton Penguins to downtown Allentown for a 7:05 p.m. clash. Then, on Saturday, April 8, the Phantoms host the Springfield Thunderbirds in a 7:05 p.m. tilt at PPL Center. Saturday’s game features a Phantoms Wall Cling Giveaway free to the first 2,500 kids 14 and under presented by PSECU.

Tickets for both of the Phantoms’ games this weekend are available online by clicking HERE.