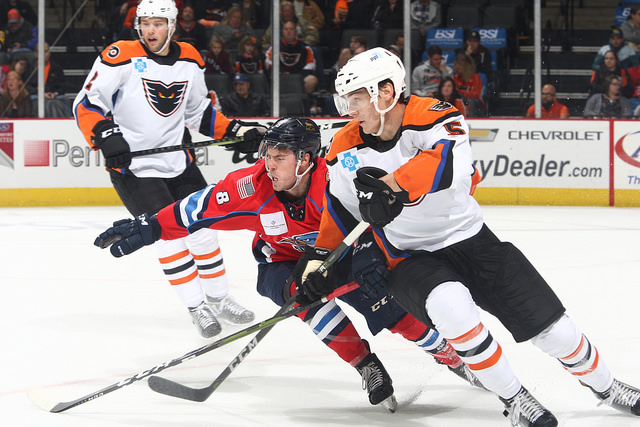 Lehigh Valley, Pa. – The Lehigh Valley Phantoms took their first loss of the season on Friday night as the Springfield Thunderbirds scored two goals in the first period and never looked back en route to a 7-0 decision. T-Birds goalie Samuel Montembeault was on top of his game with 35 saves as the second-year pro posted his third career shutout. Lehigh Valley actually out shot Springfield in the game 35-30 but Montembeault made the big stops when the game was close while the Thunderbirds benefited from some sharp snipes and screens. 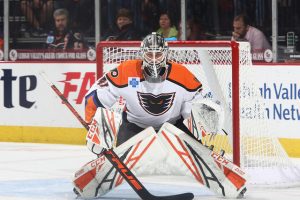 The two teams will rematch on Saturday night in Springfield’s home opener in an evening that will likely feature a significantly motivated Phantoms contingent ready to do battle.

Last year, Springfield pinned one of the more humbling PPL Center losses on the Phantoms in January in a 6-2 decision that ultimately sparked a 12-game home point streak for the Phantoms and a 19-1-2 run at PPL Center. Perhaps this result against the Thunderbirds will yield similar results for a team that had the best home record in the league last year at 27-6-5.

Carter Hart allowed four goals in about a half-game for the Phantoms before making way for Anthony Stolarz in relief. Stolarz took the ice as a Phantom at PPL Center for the first time since April 7, 2018. It was just the second Phantoms game for Stolarz since his knee injury on April 12, 2017. His 18-months with very little game-action came as a result of his recovery on two different knee surgeries.

Ludwig Bystrom paced the Thunderbirds attack with two goals and one assist while first-rounder Henrik Borgstrom also recorded a three-point night on one goal and two helpers.

Springfield’s power play went 5-for-7 in the game and was a huge key for their success. The five power-play goals represented the most ever allowed by Lehigh Valley who previously had surrendered four in a road game at Wilkes-Barre/Scranton on October 17, 2015.

As strange as it may first sound, the quality of the game was not entirely reflected by the final margin. 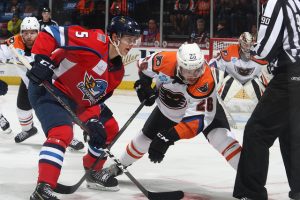 Patrick Bajkov opened the scoring against his former Juniors teammate with a power-play blast from the right circle for his first career professional goal at 7:05 into the game. Bajkov notched a record 100 points with the Everett Silvertips last year while Carter Hart was winning MVP honors on his way to culminating his historically good career.

Paul Thompson rushed up the right wing and scored from a sharp angle with just five seconds left in the period for a 2-0 advantage.

The second period is where Springfield would put the game away with four straight tallies. Anthony Greco on the back-door on the power play blasted a right circle strike to the far post past Hart for a 3-0 lead at 5:21. Then Bystrom’s shot from center point found its way through Hart who was screened and contacted by a Springfield player just before the goal. As the game reached a 4-0 margin, head coach Scott Gordon opted to pull Hart in favor of Stolarz.

Bystrom scored his second of the game at 13:44 of the second period for a 5-0 lead on the power play. And Borgstrom culminated a 2-on-1 with Joel Lowry for an even-strength goal to make it 6-0 before the second break. 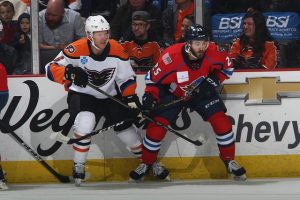 Julian Melchiori’s high-slot power-play blast directly off a faceoff win capped the scoring for the Thunderbirds on their historically successful night to finish off the 7-0 win.

Lehigh Valley and Springfield meet again on Saturday night in Western Mass. The Phantoms are back at PPL Center on Friday, October 19 against the Wilkes-Barre/Scranton Penguins on “Hat Trick or Treat” Night featuring a Halloween Theme for some spooky-good times as well as a ball-cap giveaway courtesy of Service Electric. Tickets are available at the WFMZ-69 Box Office at PPL Center and online at PPLCenter.com