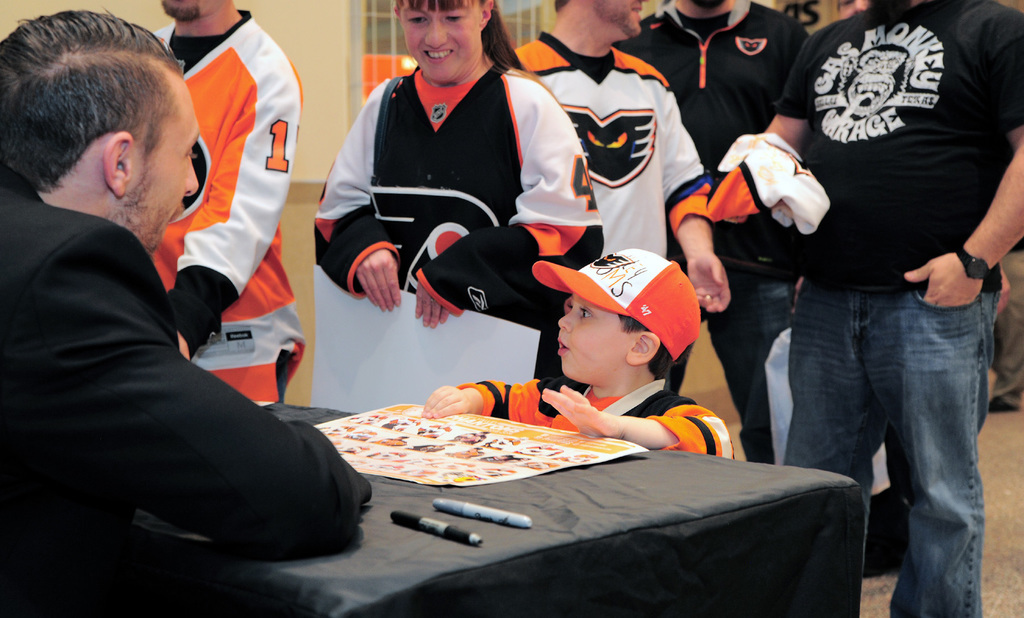 Lehigh Valley, PA – After an intense and emotional victory the night before, the Lehigh Valley Phantoms just weren’t able to get their offense clicking against the Providence Bruins in a 3-0 loss at PPL Center on Saturday night.

A big house of 8,423 filed into the new arena in Center City downtown for another sellout crowd but the Phantoms were simply not connecting and clicking like they did 24 hours prior in their breathtaking 6-5 shootout win against Hershey. The high-flying Phantoms offense was shutout this year while Malcolm Subban’s 18 saves were enough for his fifth career shutout. Entering the game, the Phantoms rated sixth in the AHL (out of 30 teams) in total offense cranking up 3.25 goals per game but some nights prove to be more difficult than others even for the most powerful attacks

The large crowd on hand received Phantoms posters at the outset and then enjoyed the opportunity to meet with the players after the game with the team’s fun postgame autograph event. It’s not just a chance for the fans to shake hands with some of their favorite Phantoms players but it also turns into a mutual opportunity for the players to meet the fans and thank those in the Lehigh Valley community for their tremendous support of the team and the incredible adrenaline-pumping atmosphere they create inside the team’s new home.

The game on several occasions could have taken a far different turn. The two teams battled to a scoreless deadlock past the midway point. On their way there, the Phantoms had some quality pressure on several occasions early in the second period which included two shots that got through Subban and found the post.

Jesper Pettersson snapped one on from center-point off the right iron past the left skate of the Providence netminder. The puck bounced almost straight across and came very close to hitting the other post. But Pettersson’s effort for his first goal of the season would just miss the opposite iron and skittered away to the corner.

Davis Drewiske neatly navigated his way to the right circle with some impressive stick-handling and offered a backhander that beat Subban over his glove but the drive caromed off the top of the crossbar and bounded away.

Similarly, Pavel Padakin was robbed on a point-blank try early in the third period on a possible goal that would have tied the score at 1-1. Subban sprawled across to his left to barely get a glove on Padakin’s bid for his potential first professional goal on one of the most spectacular saves of the season.

Martin Ouellette performed admirably between the pipes for the Phantoms and repelled 30 of the shots efforted his way. Ultimately, Brandon DeFazio beat him high glove from the right circle late in the second period to break the goaltenders duel and that proved to be the winning tally.

Providence tacked on a couple of rebound goals in the third period on powerful blasts from odd-man rushes that Ouellette was able to deflect but not completely corral. Seth Griffith and Anton Blidh sealed the victory with their late tallies but that did not take away from the young goaltender’s performance.

“I thought Ouellette was our best player tonight,” head coach Scott Gordon said. “Can’t take away from his performance. We didn’t do a whole lot to help him.”

Call-ups from Reading of the ECHL, Ouellette and Connor Knapp both performed well in their respective starts on the brief weekend homestand while the regular Phantoms goalies, Anthony Stolarz and Jason LaBarbera, both continue to sit out with injuries. Also missing the game were Mark Alt and Kevin Sundher who went down with lower-body injuries the night before.

Cam Reid, wearing number 43, was the latest to make his debut in a Phantoms sweater. Signed to a tryout contract from Reading, Reid was one of the top players for the Royals last year with 25 goals but is no stranger to this level of play with over 80 games of experience in the AHL under his belt.

Despite the close calls for the offense, there were some stretches where the team just wasn’t able to click and get going. One night in a 6-5 win it can look so easy to make some incredible plays. The next night the bounces just feel a little strange and the frustration mounts as the pucks just aren’t going the way you want them to go. Still, the Phantoms pushed forth with their attempts in a tightly contested battle.

“We probably didn’t get as many shots as we would have liked,” veteran center Tim Brent said. “But I think there’s nobody in this room who’s going to give up from the drop of the puck to the final buzzer. We were in it the whole time and didn’t give up on it. We’re going to have to sit on this one for a couple days and then kind of refocus and get ready for Utica (on Wednesday).”

For the visiting Bruins, the result was sweet revenge and some payback after the Phantoms won consecutive games in Providence last weekend by scores of 4-1 and 5-2.

Providence out shot the Phantoms 33-18 in the game. The Phantoms finished 0-for-3 on the power play while Providence finished 1-for-5.

The Phantoms return to action on Wednesday night traveling to Utica with a chance to avenge last week’s decision at the Comets. The three-game road trip continues with weekend rivalry games at Wilkes-Barre/Scranton and Hershey on Friday and Saturday. All three games are at 7:00 with broadcast coverage commencing at 6:20 on 1470-AM and FOX1470.com and the iHeartRadio app.

The Phantoms kick off their longest homestand of the season on Wednesday, December 9 when they play the first of five in a row at PPL Center with the Hershey Bears coming to town. T-Shirts, Teddy Bears and a Post-Game Skate Event with the Phantoms players highlight the promotion-packed excitement in the upcoming days. Tickets are available at PPLCenter.com or by calling (610) 347-TIXX (8499) or at the Mealey’s Furniture Box Office location at the front entrance of PPL Center on the corner of 7th and Hamilton.