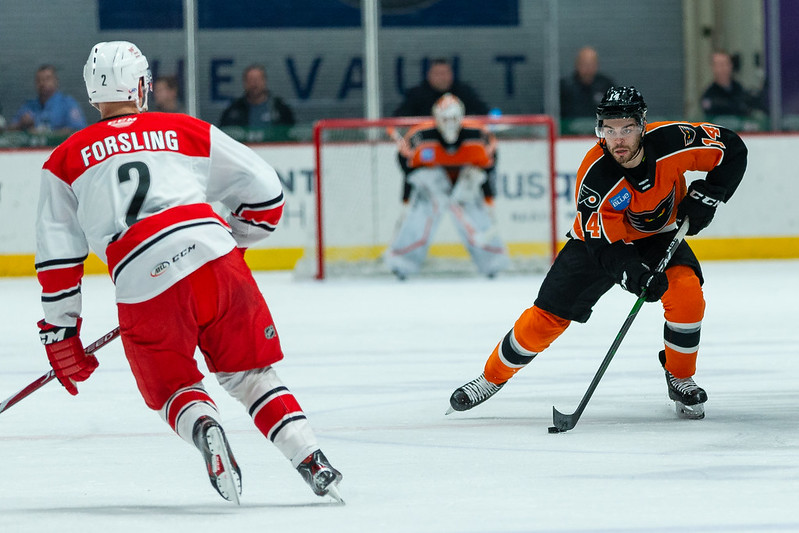 Charlotte, N.C. – Tyler Wotherspoon (2nd) and Greg Carey (9th) registered goals for the Phantoms but Lehigh Valley dropped their Sunday afternoon contest in Charlotte 4-2 in the last game before the holiday break. 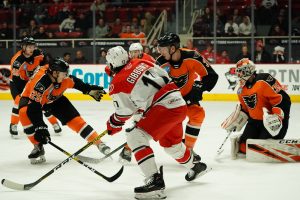 Charlotte recorded its first regulation win against the Phantoms this season in six tries. Lehigh Valley is 4-1-1 against the defending Calder Cup Champions this year.

Lehigh Valley (12-13-5) struck in the opening minutes of the game on Wotherspoon’s shot from above the left circle after a little tip back by Carsen Twarynski on the left boards. The shot eluded Checkers netminder Anton Forsberg to the far side past his left skate and in. Nate Prosser also registered an assist on the play.

J-F Berube was on top of his game and held off a strong Charlotte counter-attack for the latter minutes of the first period. The Phantoms took a 1-0 lead into the first intermission thanks to Berube’s 13 denials. 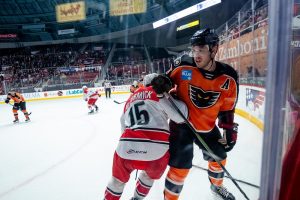 Charlotte (14-13-3) tied the game just over five minutes into the second on a Gustav Forsling (3nd) blast. And the Checkers struck for a shorthanded goal at the end of the second with Roland McKeown (3rd) trailing to receive a feed in the high slot from Steven Lorentz. McKeown’s conversion to the stick-side of Berube made up for a close call just minutes earlier when his blast off the crossbar bounced straight down but somehow stayed out. It was just the third shorthanded goal of the season surrendered by the Phantoms.

Lehigh Valley pushed through for a tie game at 2-2 at the 8:40 mark of the third period when Greg Carey willed his way through a pair of Checkers defenders in the left circle and then reached forward for an impressive goal past the glove of Forsberg to the far side. Carey’s team-leading ninth of the season was also good for his 97th all-time with Lehigh Valley which is most in team history and fourth all-time for the Phantoms franchise dating back to the beginning of the Philadelphia Phantoms in 1996.

The 2-2 deadlock would be broken just 66 seconds later when Chase Priskie’s (5th) point-shot somehow found its way past a screened Berube and appeared to be deflected or re-directed into the back of the net. The fluky goal put the Checkers back up at 3-2. Steven Lorentz (8th) sealed the victory with his empty-netter from the blue-line on a backhander swatted straight into the net in the closing seconds. 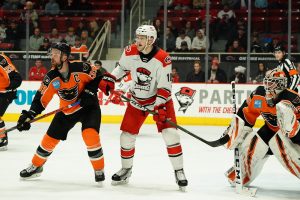 Charlotte out shot the Phantoms 30-28. Both teams were 0-for-2 on the power play. The season series between the Atlantic Division rivals will culminate with a pair of games at PPL Center on February 28 and February 29. The Phantoms do not return to North Carolina this season.

The Phantoms will hold no practices over the Holiday Break and will return to action next Friday night at the Wilkes-Barre/Scranton Penguins. The Phantoms come back to PPL Center on Saturday, December 28 against the Utica Comets on Phantoms Calendar Night followed by the team’s first home matinee of the season on Sunday, December 29 at 3:05 p.m. in a rematch against the Hershey Bears.