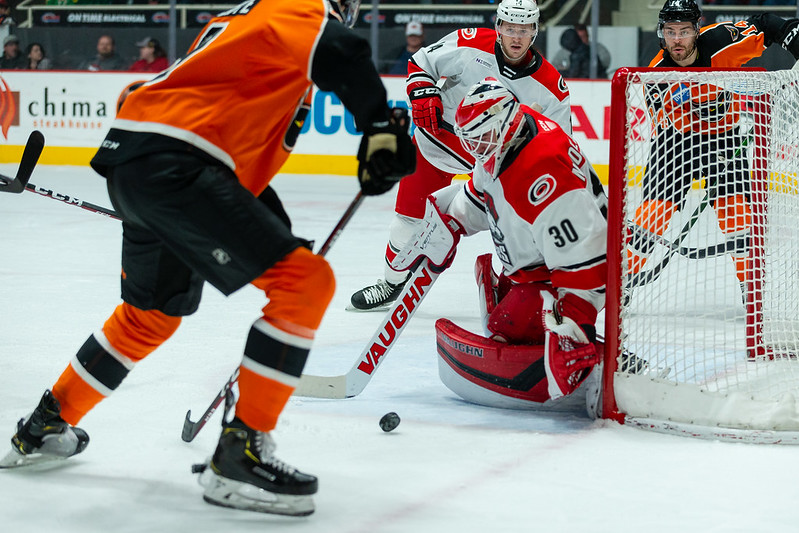 Charlotte, N.C. – Pascal Laberge (4th, 5th) racked up a pair of goals and Mark Friedman (2nd) returned to the lineup with his second goal of the season leading the Lehigh Valley Phantoms to a 3-2 victory at the Charlotte Checkers on Saturday night.

Alex Lyon was stellar in the win and preserved a blank sheet until the closing minutes of the game when Charlotte scored a pair of goals with around 4:00 left forcing the Phantoms to sweat it out in the final moments. Lyon made a tremendous save with 25 seconds remaining after his stick had been knocked free to preserve the victory. He raised his right arm and blocker up high to deflect a drive from Eetu Loustarinen from the right circle aimed for the far post.

Lehigh Valley (12-12-5) stayed perfect in regulation against the defending Calder Cup Champions and now hold a 4-0-1 record vs. Charlotte in the season series.

Charlotte (13-13-3) had the early jump in the game and peppered away at Alex Lyon for 10 shots in the opening minutes of a stretch that included a pair of Checkers power plays. But Lyon was up to the task in a push that included a couple point-blank stops right on top of him. The Checkers were mostly held off by a re-inspired Phantoms defensive corps from that point forward.

Pascal Laberge made a nice cut to the backdoor to accept a cross-ice feed by Chris Bigras from the left boards. The Laberge tap-in at 8:35 into the second period staked the visiting Phantoms to the initial lead. The Phantoms improved to 8-2-2 in games in which they score the first goal.

Laberge doubled his fun about 10 minutes later on a hard scramble down low. After Maksim Sushko pulled the puck away and fed his fellow forwards in the middle, both Laberge and Maksim Sushko developed chances before Laberge successfully finished against a diving Alex Nedeljkovic in the Checkers’ crease.

The Phantoms’ power play pushed through in the third period to extend the advantage with Mark Friedman speeding through the neutral zone and identifying a nice gap between the defensemen to take it to the net himself. His top shelf goal on the break over the glove of Nedeljkovic put the Phantoms up 3-0 and was also good for the second assist of the night for Chris Bigras.

Both of Friedman’s goals this season have come against Charlotte. The crafty defenseman also scored an overtime winner against the Checkers on November 23 at PPL Center. Friedman was returning to the lineup for the first time after missing the past two weeks with injury. 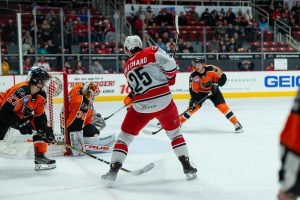 Charlotte surged back and broke Lyon’s shutout bid in the closing minutes of the third. Gustav Forsling’s center-point shot was redirected down low by Max McCormick with just 4:07 left to make it a 3-1 game. And Clark Bishop followed that up just 31 seconds later with his sharp-angle conversion from the bottom of the left circle.

But the Phantoms hung on the rest of the way. Max Willman joined the Phantoms this week from Reading and made his AHL debut skating primarily on a line with Steven Swavely and Kurtis Gabriel.

Charlotte out shot the Phantoms 35-34. The Phantoms were 1-for-2 on the power play while holding the Checkers to 0-for-2 on a pair of penalties in the first period.

The Phantoms and Checkers will rematch on Sunday at 1:00 p.m. in the last game before the holiday break. The Phantoms return to PPL Center on Saturday, December 28 against the Utica Comets on Phantoms Calendar Night followed by the team’s first home matinee of the season on Sunday, December 29 at 3:05 p.m. against the Hershey Bears.

Next Time Out: The Phantoms return to PPL Center on Saturday, December 28 against the Utica Comets on Phantoms Calendar Night followed by the team’s first home matinee of the season on Sunday, December 29 at 3:05 p.m. in a rematch against the Hershey Bears.