Lehigh Valley, Pa. – The Lehigh Valley Phantoms, proud AHL affiliate of the Philadelphia Flyers, have announced today that they have signed forward Max Willman to an AHL contract through the 2020-21 season. 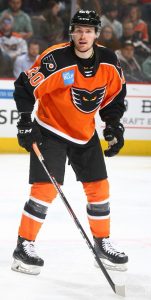 Willman, 24, is currently in his first professional season and has played 15 games for the Lehigh Valley Phantoms after signing a PTO on December 19, 2019. He scored his first AHL goal on January 15 against the Syracuse Crunch and has tallied a total of three goals and two assists for five points. He posted his first multi-point game with two assists against the Providence Bruins on January 22. Willman was originally signed an ECHL contract with the Reading Royals on September 4, 2019 and totaled 15 points in 16 games for the Royals. He registered a seven-game point streak from November 22 to December 4 shortly before joining the Phantoms.