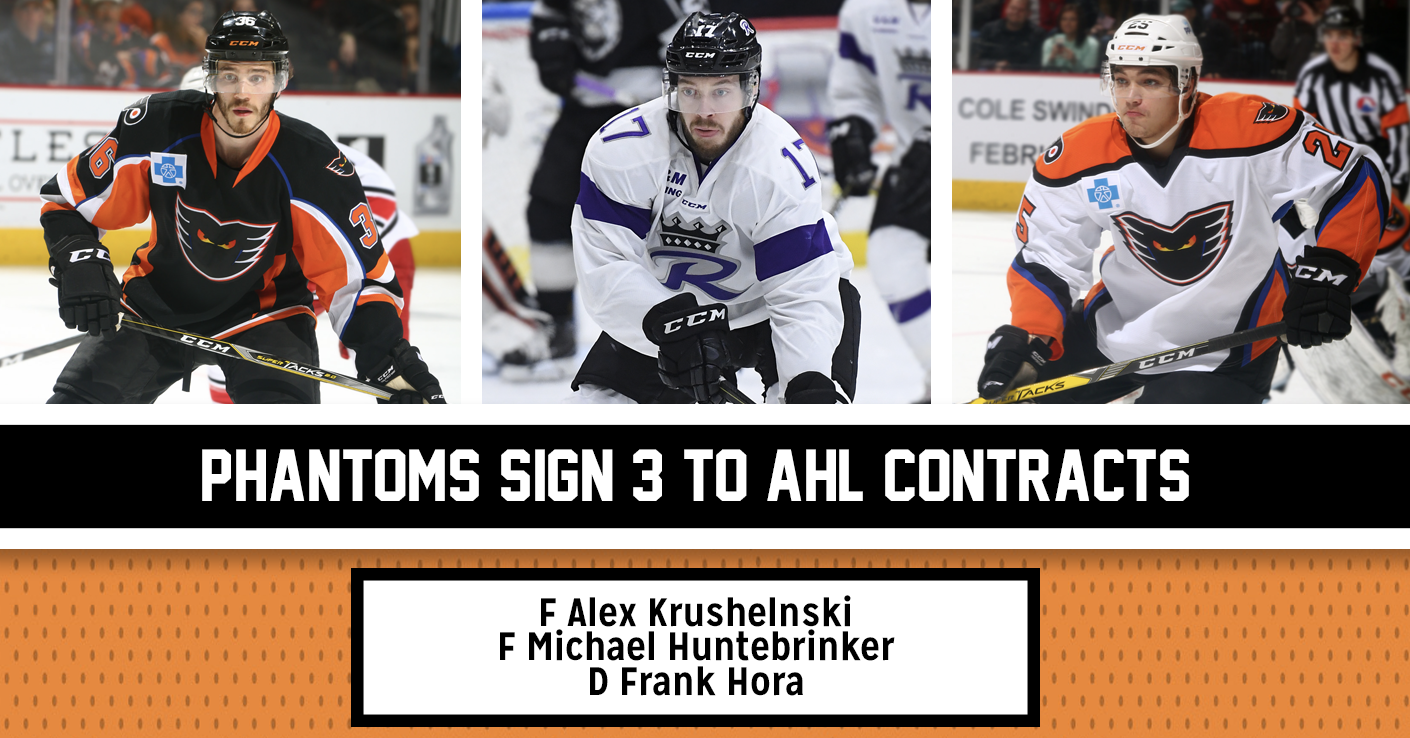 Lehigh Valley, Pa. — The Lehigh Valley Phantoms, proud AHL affiliate of the Philadelphia Flyers, are pleased to announce they have signed three players to AHL contracts, including forward Alex Krushelnyski who played the hero in the Phantoms historic five-overtime victory this past postseason.

In addition to Krushelnyski, forward Michael Huntebrinker and defenseman Frank Hora were also signed to AHL deals for the 2018-19 season.

Entering into his fifth professional season, Krushelnyski makes his return to the organization after scoring one of the most memorable goals in Phantoms history during the 2018 Calder Cup Playoffs. At the 6:48 mark of the fifth-overtime period, the Colorado College product found the back of the net to give Lehigh Valley the win over the Charlotte Checkers in Game 4 of the Atlantic Division Finals in the now longest game in AHL history.

A 27-year old out of Los Angeles, California, Krushelnyski totaled nine points (3G-6A) over 37 games with the Phantoms during the 2017-18 regular season and tacked on another two goals and two assists for a total of four points in 10 games during the Phantoms playoff run.

Krushelnyski also appeared in 24 games with the Reading Royals where he netted 13 goals and added 14 assists for 27 points en route to being named a 2017 ECHL All-Star.

A 26-year old from Chesterfield, Missouri, Huntebrinker is coming off of his first full professional season with Reading where he amassed 20 goals and 21 assists for 41 points in 65 contests.

Prior to making the jump to the professional ranks with the Royals during the 2016-17 season, he completed four years at the collegiate level with Minnesota State University – Mankato. During his time with the Mavericks, the 5’11” left-handed shot netted 15 goals and 38 helpers for a total of 53 points in 124 games.

The 22-year-old Hora spent the majority of his first professional season in 2017-18 with the Royals where he finished with 14 points (1G-13A) in 62 tilts. The native of Amherst, New York, also took part in eight games with the Phantoms at the AHL level with a plus-three rating.