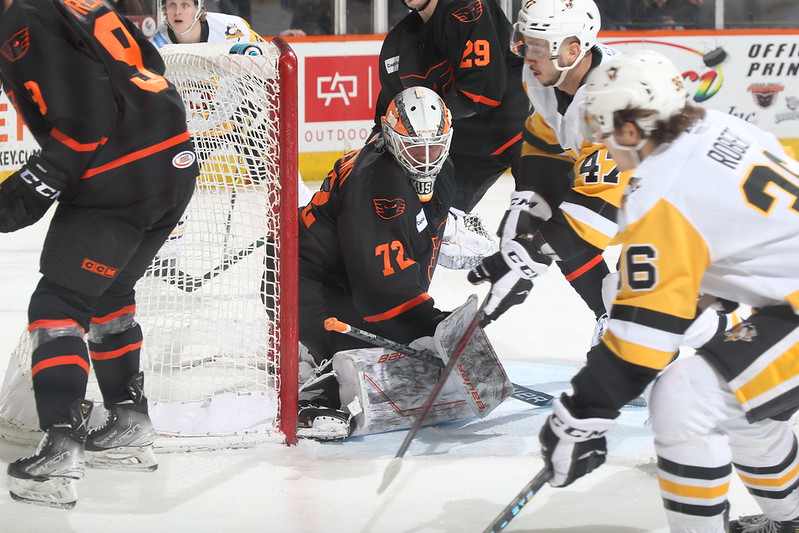 Lehigh Valley, PA – The Lehigh Valley Phantoms were knocking on the door late but the Wilkes-Barre/Scranton Penguins were able to grind the clock down to all zeros in hanging on for a 3-2 victory at PPL Center on Saturday night.

Cal O’Reilly (11th) and Maksim Sushko (6th) found the back of the net while Kirill Ustimenko made some dazzling saves among his 32 total denials in his first game back with the Phantoms.

Taylor Fedun (4th), Nathan Legare (6th) and P-O Joseph (8th) scored for the Penguins who had to hang on at the end. 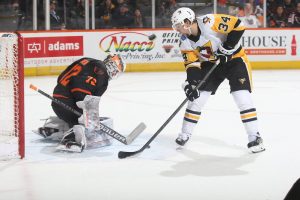 Hayden Hodgson was an attention-grabber in this game. His huge hit of Fedun on the forecheck late in the second period sparked the team and helped set up O’Reilly’s goal a few seconds later. Although, Egor Zamula’s vision across to connect with O’Reilly certainly didn’t hurt.

Ustimenko made some great saves in a scoreless first period including back-to-back stops on Legare’s breakaway and Michael Chaput’s quick put-back one-timer from the right circle. Wilkes-Barre/Scranton out shot the Phantoms 12-4 in the opening frame but “Usti”, playing for the first time with the Phantoms since November, was on top of his game.

The Penguins broke through early in the second period with a pair of goals just 34 seconds apart. Veteran defenseman Taylor Fedun was open in the left circle for a rebound conversion off a Jordy Bellerive shot that bounced back off the right pad of Ustimenko. Just moments later, it was Legare streaking up the left wing who pulled a shot around the defending Linus Hogberg from a tight angle on the rush that would squeak through five-hole on Ustimenko to make it 2-0.

The Penguins kept pushing but Ustimenko made sure the Phantoms stayed within striking distance with more key stops. Lehigh Valley was being out shot 22-6 at almost the midway point of the game.

But later in the second period, the Phantoms dug deep for something extra and started generating chances on Penguins’ goalie Tommy Nappier. Eventually, newcomer Brad Morrison found Egor Zamula on the left wing who connected cross-ice for a big blast from Captain Cal O’Reilly from the top of the right circle where he scored from almost the exact same spot on consecutive nights. Hodgson’s rocking hit on Fedun moments earlier preceded the goal and ignited the crowd.

Shortly after the Phantoms made it a one-goal game came back-to-back close calls for an equalizer. Alex Kile and Matt Strome found Garrett Wilson whose shot went off the post. Then Hayden Hodgson showed some slick hands in dangling around a pair of Penguins D. He had the strength to get off a shot that found the left post even through all the stick traffic impeding him.

The Penguins struck early in the third on a key goal when Pierre-Olivier Joseph picked an upper-far corner past the glove of Ustimenko on his shot from to the left of the dot on the left wing.

Lehigh Valley turned up the intensity and physicality in its efforts to rally and that resulted in better chances at Nappier. Clendening’s point-shot was redirected by Sushko with 4:33 left to elude Nappier and pull the Phantoms to within one.

Hodgson had a sneaky shot on a hard backhander that he got off after a battle on the left boards. But his drive with three seconds left that almoast burned Nappier just did stay out and the Penguins made it to the finish line for the win at PPL Center.

The Phantoms are 3-4-1 against the Penguins this year and have four more encounters scheduled with their rivals from Northeast Pennsylvania.

The Phantoms conclude their Go For Gold weekend with a Sunday afternoon rematch against the Hershey Bears at 2:05 p.m. Lehigh Valley had just defeated Hershey 6-3 on Friday night and the Phantoms lead the season series with a 4-1-1 record against their rivals from Chocolatetown.