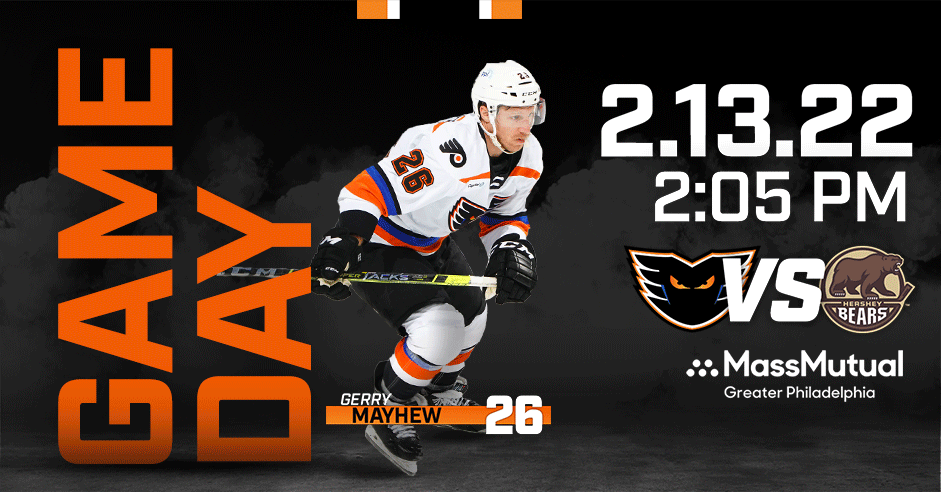 TODAY:
It’s a GAMEDAY at PPL Center presented by MassMutual as the Lehigh Valley Phantoms host the Hershey Bears for a 2:05 matinee. Lehigh Valley (16-18-8) is 1-1-0 so far in their GO FOR GOLD three-game weekend. The Phantoms are 4-1-1 against Hershey this year including a 6-3 win here on Friday night. Tonight’s game will feature a goaltending rematch from friday’s game with Felix Sandstrom taking on Zach Fucale.

LAST TIME:
The Phantoms ran out of time in their comeback efforts vs. the Wilkes-Barre/Scranton Penguins in a 3-2 setback on Saturday night. The Penguins prvailed despite a stellar goaltending performance from Kirill Ustimenko in his first game back with the Phantoms since November. “Usti” kept the PHantoms in the game with 30 saves including several dazzlers and one-on-one stops. Cal O’Reilly (11th) and Maksim Sushko (6th) scored for the Phantoms while Hayden Hodgson ignited the crowd with a pair of big hits, a sensational move in the second period setting up his own partial breakaway, and a close-call to tying the game with just 3 seconds left on his rifled backhander from the left boards. After a sluggish start, the Phantoms came alive but Tommy Nappier in the Wilkes-Barre/Scranton net made enough big saves for the win.

FRIDAY vs. HERSHEY:
The Phantoms doubled-up their opponents on Friday night racking up six goals on only 14 shots in a 6-3 victory against the rival Hershey Bears. Matt Strome and Garrett Wilson led the way with both notching one goal and two assists apiece. Cal O’Reilly had a goal and an assist while Brennan Saulnier, Alex Kile and Logan Day all notched lamplighters for the Phantoms as well.

MORE WITH LESS:
The Phantoms had only 14 shots on goal in their Friday night game against Hershey to set a new Lehigh Valley trecord for fewest shots in a game. The Phantoms previous mark was 15 shots in a game on March 5, 2015 at Hershey in a 2-1 loss. That is the new TEAM record but last night’s game did not break the all-time record for the FRANCHISE which remains 12 shots on goal in a game for the Philadelphia Phantoms on March 20, 2001 against the St. John’s Maple Leafs.

NEW BLOOD:
After some injuries and other lineup absences before and during the game on Friday, the Phantoms finished their contest against Hershey somewhat shorthanded and with only nine forwards. Some reinforcements have been added to help the cause. Defenseman Mason Millman has been reassigned to the Phantoms by Philadelphia after a quick 10-day stint with Reading in the ECHL. Forwards Brad Morrison and Alexis D’Aoust are projected to make their Phantoms’ debuts in tonight’s game upon their arrivals from Reading and Trois-Rivieres of the ECHL. Both Morrison and D’Aoust have AHL experience with multiple teams. Morrison has 11 goals with Reading and D’Aoust was leading the Trois-Rivieres Lions with 15 goals.

News and Notes:
– Lehigh Valley has gone 13-7-3 in its last 23 games after a beginning that saw just three wins in the first 19 games at 3-11-5.
– Adam Clendening played his 500th pro gameSaturday against Wilkes-Barre/Scranton.
– Matt Strome had three points on Friday (one goal and two assists) for a new career best. All three of his points came in the first period of Lehigh Valley’s 6-3 win over Hershey.
– Hayden Hodgson scored three goals last weekend to take the team lead with 12. He has scored two goals in a game three times this season.
– Captain Cal O’Reilly leads the Phantoms with 31  points (11-20-31) and rates 9th in AHL history with 523 career assists.
– Cal O’Reilly (3), Jackson Cates (2) and Max Willman (2) all have multiple shorthanded goals this season.
– The Phantoms have points in 9 of their last 12 home games (8-3-1)
– Lehigh Valley’s six-game homestand is their longest stretch of consecutive home games this season.
– 11 Phantoms players this season have also suited up for the Philadelphia Flyers: Wade Allison, Connor Bunnaman, Jackson Cates, Morgan Frost, Gerry Mayhew, Isaac Ratcliffe, Linus Sandin, Felix Sandstrom, Max Willman, Cam York, Egor Zamula