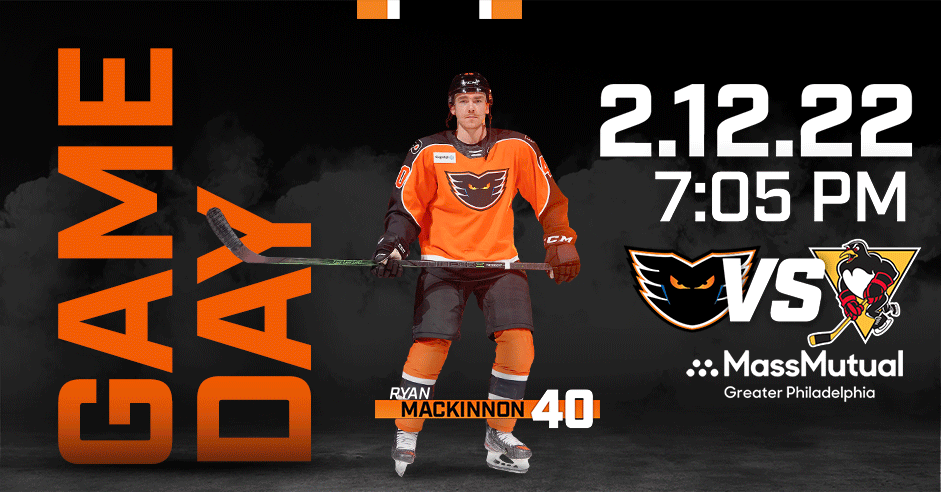 TONIGHT:
It’s a GAMEDAY at PPL Center presented by MassMutual as the Lehigh Valley Phantoms take on the Wilkes-Barre/Scranton Penguins as the team’s FOR GOLD weekend-long Olympics tribute continues with three games in a row at PPL Center. Lehigh Valley (16-17-8) is in a virtual tie for the last playoff spot in the Atlantic Division with Wilkes-Barre/Scranton (18-19-4) with identical points percentages. The Phantoms are 3-3-1 vs. the Penguins this season. Tonight is Game 8 out of 12 in the season series and is also the third game of a six-game homestand for the Phantoms, the longest of the season and tied for the longest all-time for Lehigh Valley.

LAST TIME:
The Phantoms doubled-up their opponents on Friday night racking up six goals on only 14 shots in a 6-3 victory against the rival Hershey Bears. Matt Strome and Garrett Wilson led the way with both notching one goal and two assists apiece. Cal O’Reilly had a goal and an assist while Brennan Saulnier, Alex Kile and Logan Day all notched lamplighters for the Phantoms as well.

MORE WITH LESS:
The Phantoms had only 14 shots on goal in their Friday night game against Hershey to set a new Lehigh Valley trecord for fewest shots in a game. The Phantoms previous mark was 15 shots in a game on March 5, 2015 at Hershey in a 2-1 loss. That is the new TEAM record but last night’s game did not break the all-time record for the FRANCHISE which remains 12 shots on goal in a game for the Philadelphia Phantoms on March 20, 2001 against the St. John’s Maple Leafs.

NEW BLOOD:
After some injuries and other lineup absences before and during the game on Friday, the Phantoms finished their contest against Hershey somewhat shorthanded and with only nine forwards. Some reinforcements have been added to help the cause. Defenseman Mason Millman has been reassigned to the Phantoms by Philadelphia after a quick 10-day stint with Reading in the ECHL. Forwards Brad Morrison and Alexis D’Aoust are projected to make their Phantoms’ debuts in tonight’s game upon their arrivals from Reading and Trois-Rivieres of the ECHL. Both Morrison and D’Aoust have AHL experience with multiple teams. Morrison has 11 goals with Reading and D’Aoust was leading the Trois-Rivieres Lions with 15 goals.

WILKES-BARRE-SCRANTON PENGUINS:
Wilkes-Barre/Scranton (18-19-5) has dropped two straight after a red-hot stretch that included a five-game point streak (4-0-1) and with points in 8 of the last 9 (7-1-1). It was quite a turnaround for the Penguins who had fallen in 8 straight through mid-January but went 9-2-1 immediately after that. Goalie Alex D’Orio was their rock going 6-2-1, 1.99, .926 in the hot streak. Valtteri Puustinen leads the team with 27 points including 14 goals. Former Buffalo first-rounder Alexander Nylander has thrived since arriving a little over a month ago in a trade with Chicago scoring 7-6-13 in 16 games with his new team in Wilkes-Barre. The Phantoms are 3-3-1 against Wilkes-Barre/Scranton.

News and Notes:
– Lehigh Valley has gone 13-6-3 in its last 22 games after a beginning that saw just three wins in the first 19 games at 3-11-5.
– Adam Clendening is playing his 500th pro game tonight against Wilkes-Barre/Scranton.
– Matt Strome had three points on Friday (one goal and two assists) for a new career best. All three of his points came in the first period of Lehigh Valley’s 6-3 win over Hershey.
– Hayden Hodgson scored three goals last weekend to take the team lead with 12. He has scored two goals in a game three times this season.
– Captain Cal O’Reilly leads the Phantosm with 28 points (10-20-30)
– Cal O’Reilly (3), Jackson Cates (2) and Max Willman (2) all have multiple shorthanded goals this season.
– The Phantoms have points in 9 of their last 11 home games (8-2-1)
– Lehigh Valley’s six-game homestand is their longest stretch of consecutive home games this season.
– 11 Phantoms players this season have also suited up for the Philadelphia Flyers: Wade Allison, Connor Bunnaman, Jackson Cates, Morgan Frost, Gerry Mayhew, Isaac Ratcliffe, Linus Sandin, Felix Sandstrom, Max Willman, Cam York, Egor Zamula

UP NEXT:
The Phantoms conclude their exciting GO FOR GOLD weekend on Sunday at 2:05 p.m. against the Hershey Bears.