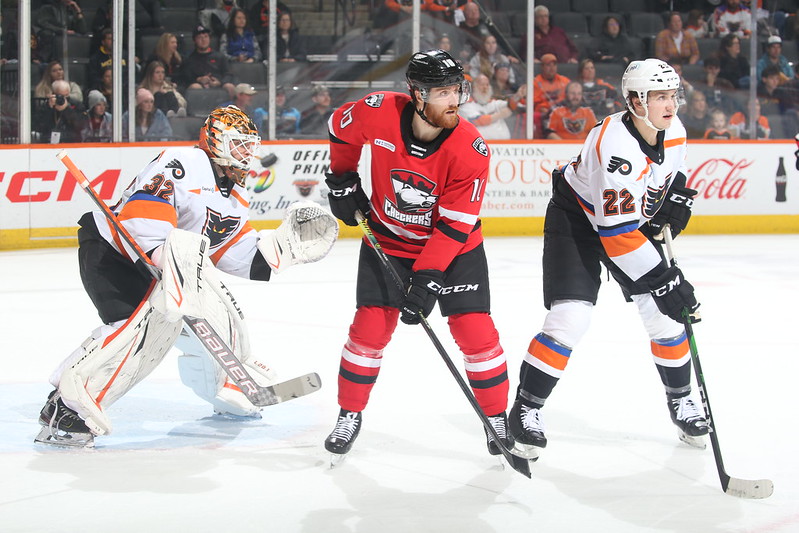 Lehigh Valley, PA – With their backs to the wall and trailing 3-0, the Lehigh Valley Phantoms put together a valiant and exciting comeback surge in the final period to force a 3-3 tie against the Charlotte Checkers but Connor Carrick’s power-play goal with under 2:00 left put the visitors back on top for a 4-3 decision on Wednesday night at PPL Center.

On Military Appreciation Night presented by Netizen, Max Willman (7th), Cal O’Reilly (2nd) and German Rubtsov (2nd) all scored in the final twenty minutes as the Phantoms clawed their way back to even. Rubtsov’s goal off his skate with 4:02 left completed the comeback effort and the Phantoms were on the verge of taking the lead but a late penalty provided the Checkers the opportunity to regain momentum which they did in the form of Carrick’s blast from the left dot with 1:49 remaining. 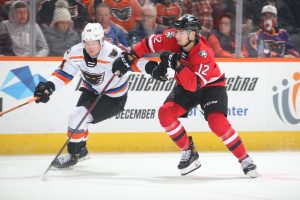 Charlotte scored a pair of shorthanded goals in the second period from Scott Wilson and Max McCormick and an even stretch goal from Logan Hutsko in building a 3-0 lead.

A scoreless first period made way for a Charlotte surge in the second. Scott Wilson (4th) scored on a 3-on-1 shorthanded in the first shift of the middle frame to put the Checkers up 1-0.

Lehigh Valley had a five-minute major on a slew-footing match penalty against Gustav Olafsson. That eventually became a full two-minute 5-on-3 with an additional Charlotte infraction partway into the major penalty. But an intercepted pass led to a 2-on-1 break for Charlotte and Max McCormick buried his shot from the right dot for an unassisted goal on their 3-on-5 kill to take a 2-0 lead.

Charlotte (7-5-1) worked the puck out to Hutsko moving across the slot who fired over the right shoulder of Sandstrom for a 3-0 lead.

Twice in the second period the Phantoms had the puck off the post or on the goal-line but couldn’t get it into the net behind Chris Gibson who was barerly hanging on. Isaac Ratcliffe’s tip of a Cooper Zech shot got through Gibson and appeared to be on its way in when it was cleared out of the blue paint. And another drive cutting in handcuffed Gibson who fell backwards onto the puck which had almost reached the line behind him.

Lehigh Valley (3-8-3) continued with some of that urgency in the third in their comeack. Max Willman took a little tip from Cal O’Reilly for an intercept in the Charlotte zone. The puck pursuit led to a snipe moving across the slot from right to left for Willman’s team-leading seventh of the season. Willman has also scored a goal in five of the last six games.

A few minutes later, Cal O’Reilly got to the net-front to tip a Cooper Zech shot to make it a one-goal game with 10:45 remaining. Egor Zamula received a secondary assist on the play.

Maksim Sushko’s push across the slot went off the skate of Rubtsov and past Gibson for a tying goal with 4:02 left that was upheld after video review and the PPL Center crowd was ecstatic with the excitement of the three-goal comeback in the third. 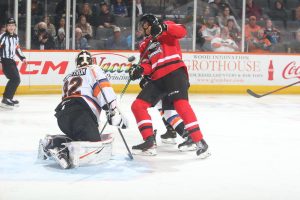 But Carrick’s one-timer from the left dot with 1:49 left got past Sandstrom for the winning goal as Lehigh valley wasn’t able to score with the pulled goalie in the closing minutes of the game.

The Phantoms are on the road for their next three straight including a Friday night game at the Rochester Americans at 7:05 and a Saturday afternoon game at the Toronto Marlies at 4:00.

The Phantoms return to PPL Center on Saturday, November 27 with a Thanksgiving Weekend matchup against the Bridgeport Islanders on Hockey Fights Cancer Night featuring a live performance by LIQUID-A in the Saturday Night Hockey Live concert series.

Tickets are available at PPLCenter.com