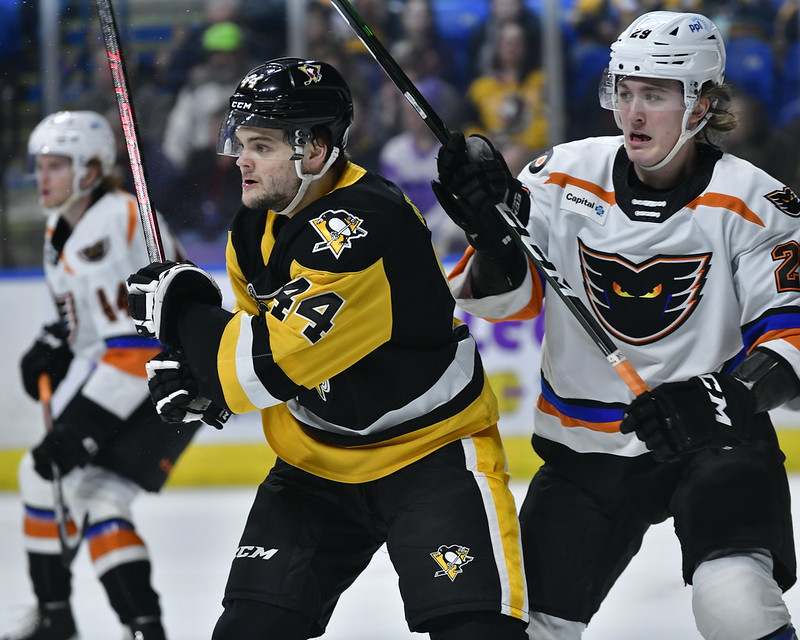 Wilkes-Barre Twp., PA – Hayden Hodgson tied the game in the third period and Adam Clendening scored the shootout winner as the Lehigh Valley Phantoms impressively surged back from an early 2-0 deficit in an exciting 3-2 shootout victory at the Wilkes-Barre/Scranton Penguins on Wednesday.

Kirill Ustimenko recorded his first AHL win of the season with 30 saves. It was the second career AHL win for Ustimenko a little over two years after his first win which also came in this building.

Lehigh Valley (18-19-9) closed the gap on the team they are directly chasing in the Atlantic Division standings with the exciting comeback. 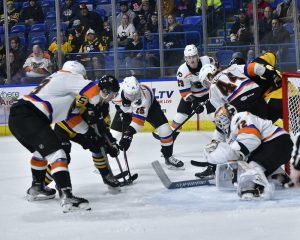 However, the game didn’t look so great to start for the Phantoms. Wilkes-Barre/Scranton (21-21-6) was blasting away on Ustimenko with a shots advantage of 6-0 in the opening three minutes which ballooned to a 10-1 shots advantage on the seemingly tilted ice a few minutes later. But Ustimenko made the big stops to keep the game at 0-0 while the Phantoms found their form. Lehigh Valley would go on to outshoot the Penguins the rest of the way 38-22.

But the Penguins still had the advantage for the first period and goals for Jonathan Gruden (5th) at 12:17 in and Filip Hallander (5th) with 1:48 remaining in the frame staked the home team to a 2-0 advantage at the first break. Gruden’s goal was a deflection of a left-point shot from Pierre-Olivier Joseph that was tipped past Ustimenko’s glove. Hallander’s goal on the backdoor came on a cross-ice pass by Joseph setting up the one-on-one move off Ustimenko’s right pad.

But Ustimenko was perfect after that. And the Phantoms began to chip away and gain momentum.

Charlie Gerard connected from the side of the net for a Garrett Wilson one-timer in the slot but goalie Alex D’Orio, diving on his right hip, somehow came up with the spectacular save with the glove on his right hand to keep the Phantoms off the board.

Maksim Sushko scored a few minutes later on the backdoor on a nice pump-fake by Adam Clendening at the top of the right circle that induced D’Orio to bite. When Clendening smartly slipped the disc over to Sushko he was looking at a mostly wide-open net to bury his seventh of the season and get the Phantoms on the board almost halfway through the second.

Lehigh Valley benefitted from three consecutive power plays in the third period and eventually tied the game with 8:31 left on a loose puck in the slot which Hodgson was able to muscle and will his way to through a Penguins’ defender. The impressive goal,  assisted by Garrett Wilson and Tanner Laczynski, tied thegame at 2-2. 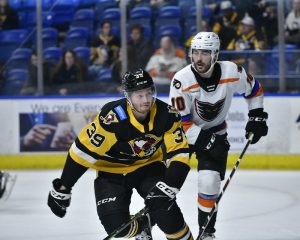 The Phantoms carried the play for most of the overtime and bombarded D’Orio with seven shots in the 3-on-3 period but D’Orio somehow stopped all of them. Ustimenko was up to the task as well on the Penguins’ challenging efforts.

Clendening shot off the underside of D’Orio’s glove in the first round of the shootout to bounce in his second shootout goal of the season. All three Wilkes-Barre/Scranton shooters were denied by Ustimenko. Drew O’Connor ran out of space on the right of the cage as Ustimenko went down and used his left pad to block off any chance on net for the game’s final play.

Lehigh Valley improved to 4-4-1 against the Penguins with three pivotal games remaining in the season series.

The Phantoms are opening a three-game road-trip which will continue on Friday night and Saturday afternoon at the Cleveland Monsters.