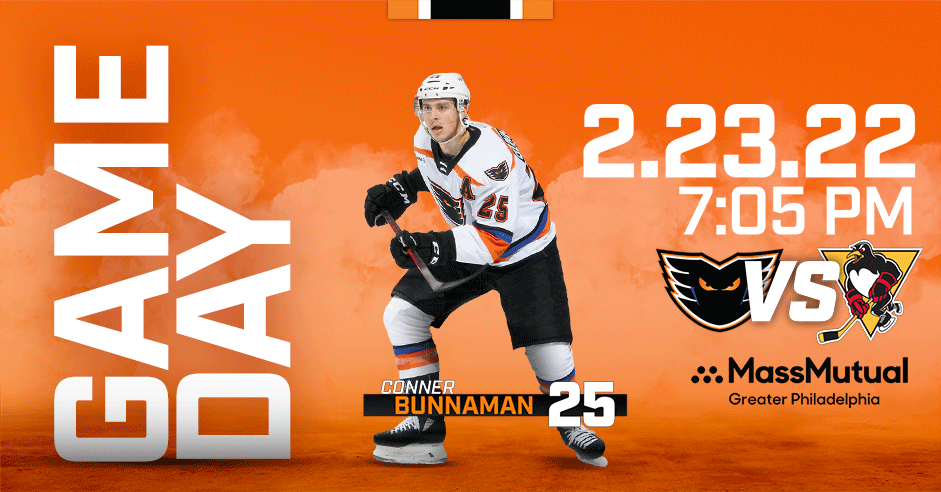 TODAY:
It’s a GAMEDAY presented by MassMutual as the Lehigh Valley Phantoms travel to Wilkes-Barre to take on the rival Penguins. Tonight is the beginning of a three-game road trip which includes Friday and Saturday games in Cleveland.
Lehigh Valley (17-19-9) is four points back of Wilkes-Barre/Scranton (21-21-5) for the final playoff spot in the Atlantic Division while also holding two games in hand. This is game 46 of the season. There are 31 games remaining including tonight. Lehigh Valley is 3-4-1 against the Penguins entering Game 9 out of 12 in the season series.

LAST TIME:
Tanner Laczynski scored in his first weekend back but the offense was unable to break through Charlie Lindgren otherwise as the first place Springfield Thunderbirds emerged with a 3-1 victory at PPL Center on Sunday afternoon. Three-time NHL All Star James Neal scored the winning goal with 11:35 left. Kirill Ustimenko made 29 saves on 31 shots in a solid effort.

ON THE MOVE:
Connor Bunnaman and Kirill Ustimenko have returned to the Phantoms after quick recalls to the Flyers on an emergency basis. Ustimenko dressed as the backup goalie for Philadelphia on Monday and Tuesday.

TANNER’S BACK:
Tanner Laczynski was activated from Philadelphia’s injured reserve and loaned to the Phantoms and made his season debut in Saturday’s game against Utica. He scored the team’s lone goal on Sunday against Springfield. The talented center out of Ohio State had hip surgery in September during Flyers’ Training Camp and has been rehabbing and regaining his strength ever since. Laczynski scored 6-4-10 in 14 games with the Phantoms last season and also made his NHL debut with the Flyers in a five-game stint in April.

NEW GUY:
Forward Adam Johnson has been acquired in a trade with the Ontario (Cal.) Reign in exchange for future considerations. Johnson made his Phantoms’ debut on Sunday afternoon against Springfield. The Minnesota-Duluth product has played in 227 career AHL games scoring 46-79-125. Johnson spent three seasons with the Wilkes-Barre/Scranton Penguins from 2017-20 where he played in 185 games scoring 39 goals. He also has played in 13 NHL games with the Pittsburgh Penguins scoring one goal.

WILKES-BARRE/SCRANTON PENGUINS
The Penguins are coming off a 3-1 win at Hershey on Tuesday night led by Kyle Olson’s pair of goals. Tommy Nappier was exactly one minute away from his first AHL shutout before Brian Pinho broke through for the Bears.
The Phantoms are 3-4-1 against WBS. Lehigh Valley has gone 2-2-0 in Wilkes-Barre.
Former Phantom Mark Friedman has joined Wilkes-Barre/Scranton on a conditioning loan to potentially play his ex-team for a first time. The Penguins have clawed their way out of the Atlantic Division cellar but had only two wins in their last seven games before yesterday’s victory at Hershey.
Wilkes-Barre/Scranton has the lowest scoring offense in the AHL at just 2.54 goals per game. Former Buffalo first-rounder Alexander Nylander has scored 8-8-16 in 23 games since coming over from the Chicago Blackhawks’ organization in a trade in December.

News and Notes:
– Lehigh Valley went 2-3-1 on its recent six-game homestand
– Lehigh Valley has gone 14-8-4 in its last 26 games after a beginning that saw just three wins in the first 19 games at 3-11-5.
– KILLING IT! The Phantoms’ penalty kill rates fifth in the AHL and second in the conference at 84.0%. The Phantoms have killed off 10 straight opposing power plays and are at an even stronger 88.4 % (61/69) in their last 23 games since December 18
– The Phantoms have played 45 games and have 31 remaining with barely more than two months to go in the 2021-2 regular season.
– Last week, Maksim Sushko became the 12th Phantoms player this season to play for the Flyers