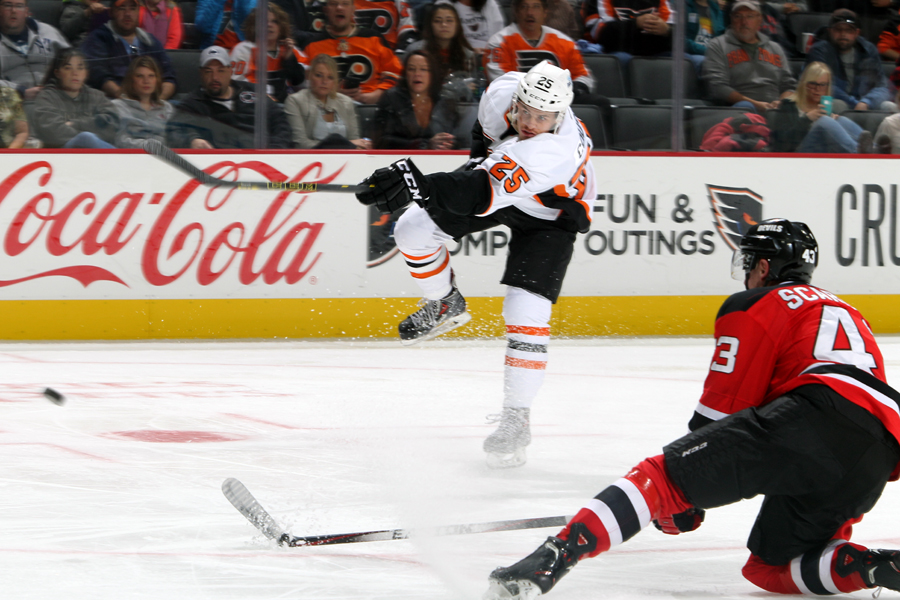 Atlantic City, NJ – The Lehigh Valley Phantoms took over in the second and third periods and dominated play against the Albany Devils. But ultimately a sluggish start proved to be the Phantoms’ downfall as Albany was able barely able to hang on for a 4-2 win on Friday night at Historic Boardwalk Hall in Atlantic City.

Goals by Taylor Leier (6th) and Petr Straka (5th) in the second period pulled the Phantoms to within a goal after Lehigh Valley spotted the hosts a 3-0 lead in the opening frame. But Albany goalie Scott Wedgewood pulled off some miraculous saves down the stretch to preserve the decision for the Devils in their alternate venue. The Albany Devils were technically the home team for this contest but the Black Friday contingent at the famed venue were dominated by Phantoms partisan cheerers.

Jason Akeson returned to the Phantoms on loan from the Flyers and arrived to Atlantic City from Philadelphia a couple hours before game-time. He played his first ever game for Lehigh Valley joining a line with Darroll Powe and Brett Hextall. It was Akeson’s 209th career game for the Phantoms franchise. He has scored 58 career goals for the Phantoms and has been the team’s leading scorer for three straight seasons.

Albany struck thrice against Phantoms starting goalie Anthony Stolarz who was playing only about an hour away from his hometown of Jackson, NJ. Reid Boucher back-door as a 5-on-3 power play had just turned to 5-on-4 would light the lamp four minutes in. Then rookies Ben Thompson and Graham Black about two-and-a-half minutes apart late in the period with the latter marker officially registered as their second on the man-advantage.

After being out shot in the first period 14-6, the Phantoms would turn the tables on Albany and would lead the shots department 23-12 for the remainder of the night. Goaltender call-up from Reading of the ECHL, Martin Ouellette, would make his AHL debut to begin the second period replacing Stolarz between the pipes. But the Phantoms would find their game again and mostly dominate in the offensive zone so Ouellette was infrequently challenged in the remaining 40 minutes.

Taylor Leier scored a power-play goal for the second game in a row and almost in the exact same way. He blasted another top-shelf drive from the right circle early in the second period to put the Phantoms on the board. Brandon Manning’s assist on the play would extend his point-streak to seven games.

Petr Straka converted late in the second period after Andrew Gordon’s shot and rebound try had drawn Albany goalie Scott Wedgewood out of the crease. Straka stole the puck behind the goal and carried out to the left circle to score on his backhand before Wedgewood could recover.

The third period was full of huge opportunities for the Phantoms to tie and several times it seemed to be in the making. A slapper by Steven Delisle rebounded out to Darroll Powe on the right of the cage but Wedgewood somehow dove back to get his glove on the game-tying bid for his most spectacular stop of the evening.

Robert Hagg had a shot that was redirected en route by Petr Straka, but just missed wide. Later Brett Flemming’s shot appeared to sneak through Wedgewood but was swept away by Albany D before crossing the goal-line.

Ouellette would deny the Devils early in the third period with a tremendous save diving acorss to his right to prevent a 3-on-1 with Darcy Zajac on the backdoor the unlucky receiver of the goaltending thievery. But Albany’s next 3-on-1 rush, with time winding down, would seal the victory for the Devils. Paul Thompson took a drop from Scott Timmins and capitalized for his team-leading 11th goal of the season.

Jay Rosehill engaged in a fight with Albany’s Mark Fraser early in the third period in a no-holds-barred duel with both pugilists landing several heavy blows. Brett Hextall charged after Paul Thompson in the closing minutes of the game for another fight to bring the crowd to its feet.

With the result, Lehigh Valley’s record is evened at 8-8-2. Lehigh Valley out shot the Devils in the game 29-26. The Devils were 2-for-4 on the power play while the Phantoms finished 1-for-3.

The game was the first of four this season between the two former rivals of the Northway (Interstate 87 in upstate New York) who used to play each other 10-12 times per season when the Phantoms were located in their previous home of Glens Falls, New York which is less than an hour north of Albany.

The Phantoms will return to Atlantic City on Sunday, December 14 for a rematch. The Albany Devils will visit PPL Center twice in January.

Up next for the Phantoms is a Saturday night home-tilt with the Norfolk Admirals on Team Autograph Night with a poster giveaway for all fans in attendance. All of the players will be available for autographs following a brief cooling off period at the end of the game. For tickets, order online at PPLCenter.com or call 610-347-TIXX (8499).