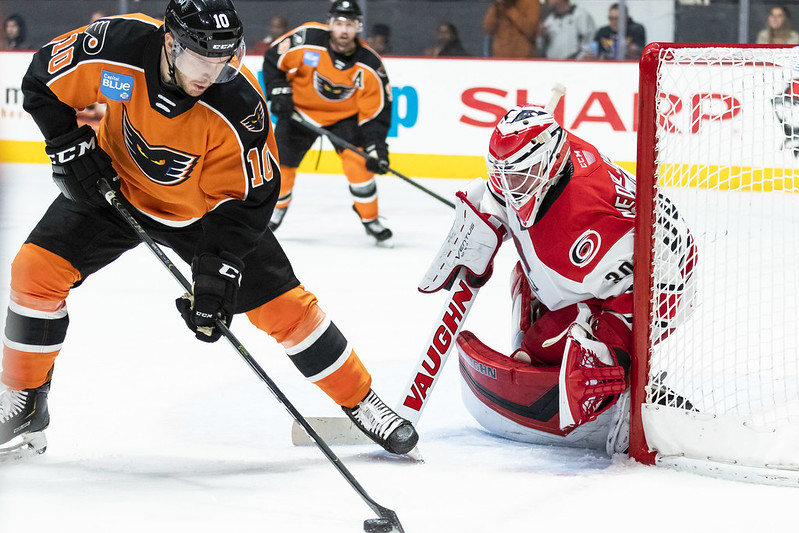 Charlotte, NC – The Lehigh Valley Phantoms scored a pair of goals in the third period from Maksim Sushko (2nd) and Greg Carey (1st) in a 3-2 come-from-behind win at the Charlotte Checkers on Saturday night. The victory for Lehigh Valley (3-1-3) extends the team’s point-streak to six games and is also the third consecutive successful weekend for the Phantoms to snag three out of four standings points. The weekend series represented the first away games of the season for the Phantoms.

The game also marked the third consecutive contest for the Phantoms to overcome a deficit after two periods. German Rubtsov (2nd) had scored in the middle period but Lehigh Valley fell behind 2-1 by the second intermission. Lehigh Valley cranked out a season-high 22 shots in a dominating second frame on its way to a standard-setting 42 shots in the game which is also a high for the Phantoms this year.

Maksim Sushko tied the game at 5:30 into the third on a strong one-timer from the right-dot after a terrific cross-ice pass by Nicolas Aube-Kubel. Tyler Wotherspoon recorded the secondary assist on a strong keep at the blue line on the left point. After the rookie from Belarus evened the game it was just 2:07 later for Greg Carey to smash his first of the season on the power play with assists to Andy Andreoff and Morgan Frost.

The Phantoms’ leading goal scorer of the past three seasons gave the Phantoms their first lead of the night on the team’s eighth power-play chance. Carey was playing in the slot on the power play while Frost had moved over to take the right-wing which had been Carey’s previous office on the man advantage. Frost moved the puck below the goal-line to Andreoff who touched it back in front for Carey’s goal. It was Greg Carey’s 89th career goal with the team which is the most of any Lehigh Valley Phantom.

J-F Berube recorded a couple big stops at the end to kill a late 6-on-4 opportunity for the Checkers in preserving his first win as a Phantom. Berube finished the evening with 29 saves on 31 shots. Janne Kuokkanen (2nd) and Jake Bean (1st) scored for Charlotte while Alex Nedeljkovic stopped 39 of 42 Phantoms shots.

Charlotte’s Jamie McGinn received a game misconduct in the first period after a five-minute major interference penalty on a collision with Lehigh Valley defenseman Chris Bigras who left the game on his own but did not return for the rest of the night. The Phantoms did not take advantage of their five-minute power play partly due to a pair of two-minute minors they were assessed within their lengthy advantage.

Morgan Frost and David Kase were dynamic on their line with a couple of tremendous chances. A give-and-go between the two speedsters in the first period rushing up the left side was somehow barely fought off by Nedelkjovic. Frost’s two-game goal streak came to an end but not for a lack of quality opportunities from the first-rounder.

Defenseman Andy Welinski made his season debut with the Phantoms and contributed a strong game after battling through an injury from the preseason. The former Anahiem Ducks and San Diego Gulls blue-liner assisted on the first goal scored by Rubtsov in the second period.

The Phantoms out shot the Checkers 42-31 in the fast-paced game. Lehigh Valley was 1-for-8 on the power play while the Checkers finished at 1-for-3.

The Lehigh Valley Phantoms return to PPL Center on Friday, November 1 tangling with the Wilkes-Barre/Scranton Penguins on Coat Drive Night for the Salvation Army presented by WFMZ-69.