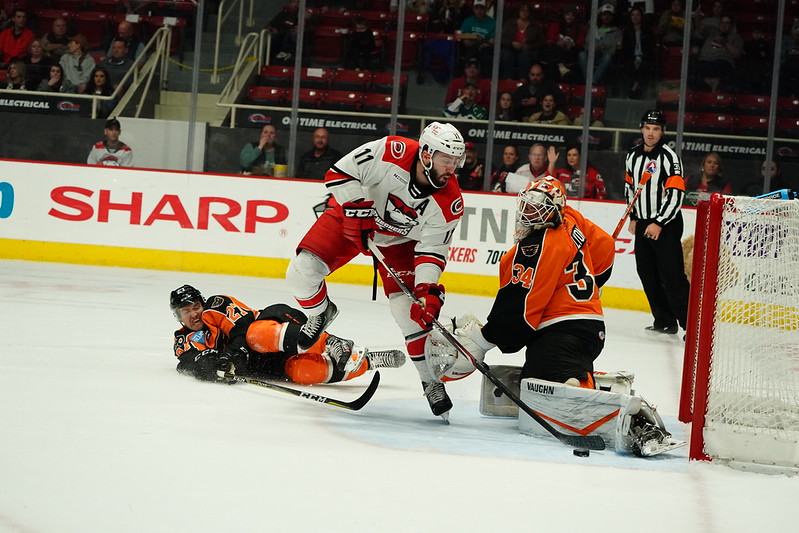 Charlotte, NC – Alex Lyon thrived in Charlotte yet again with a stellar 35-save performance as the Lehigh Valley Phantoms earned a standings point in their first away games of the season via a 3-2 shootout loss at the Charlotte Checkers on Friday night. Morgan Frost and Nicolas Aube-Kubel both scored for the second game in a row but Kyle Wood of Charlotte struck in the seventh round for the games only tally in the shootout.

Lehigh Valley (2-1-3) played a seven-round shootout for the second straight game and ran their point-streak to five consecutive games with seven points out of 10 in the last couple weeks. 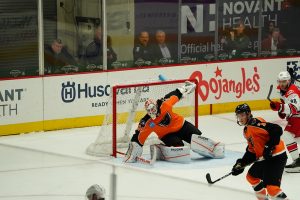 Lyon (2-0-1) was especially strong in a season-high 35-save performance in the same building where he produced his epic 94-save masterpiece in a five-overtime playoff game two seasons ago. He stopped six of seven shootout attempts and also denied Charlotte’s Janne Kuokkanen late in the first period on the season’s first penalty shot opportunity.

The Phantoms played to overtime for the third time in their last four games. For the second game in a row, Lehigh Valley rallied from behind in the third period to get there. Aube-Kubel’s strike with 7:55 remaining in regulation.

Chase Priskie (2nd) and Kyle Wood (1st) registered tallies for the Checkers. Priskie’s shorthanded goal in the first period that opened the scoring was the second shorty of the season surrendered by the Phantoms.

The Phantoms had much of the better play in the overtime but couldn’t find the game-ending strike. 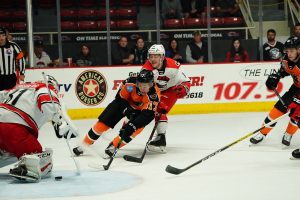 Lehigh Valley’s penalty kill was perfect in a 6-for-6 effort while the power play went 0-for-4. Charlotte out shot the Phantoms 38-26.

Forward Carsen Twarynski played his first game back with the Phantoms since his return from the Philadelphia Flyers.

The Phantoms and Checkers wrap up the weekend set on Saturday at 6:00 p.m.. Then the Lehigh Valley Phantoms return to PPL Center on Friday, November 1 taking on the Wilkes-Barre/Scranton Penguins on Coat Drive Night presented by WFMZ-69.