Phantoms Rack Up the Goals in Weekend Sweep 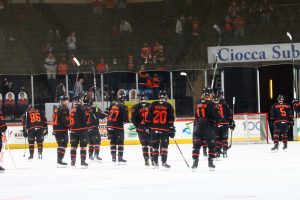 Wednesday, March 24, 2021
Hershey 6 – Lehigh Valley 2
The Bears broke a 0-0 deadlock after 30 minutes with a four-goal explosion late in the second period. Philippe Maillet led the Bears attack with five assists. Ryan Fitzgerald and Zayde Wisdom tallied goals for the Phantoms who had their three-game win streak stopped. Alex Lyon played is first full game in over a year. It was Lehigh Valley’s first home loss this season.

Friday, March 26, 2021
Lehigh Valley 3 – Binghamton 2
Tanner Laczynski scored the first Phantoms’ hat trick in almost exactly two years with an outrageous move on his shorthanded breakaway in the third period to break a 2-2 tie. He pulled the puck backwards between his legs to flip home the forehand game-winner. Laczynski also scored on the power play and an even-strength goal for the Phantoms’ win at Newark. Alex Lyon denied former teammate Danick Martel on a shorthanded breakaway with just over four minutes left among his 33 saves on the night.

Saturday, March 27, 2021
Lehigh Valley 6 – Binghamton 3
The Phantoms completed the weekend sweep of the Devils with their highest offensive output of the season to delight the fans at PPL Center. Ryan Fitzgerald scored a pair of goals while Wade Allison and Max Willman notched three-point nights with one goal and two assists apiece. Tanner Laczynski added his sixth goal in one week and Chris Bigras scored his first of the season. 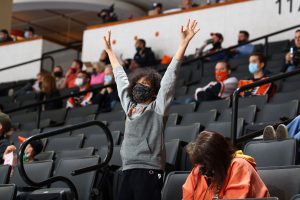 Wednesday, March 21, 2021, 7:03 p.m.  – PPL Center, Allentown PA
Lehigh Valley Phantoms (10-3-2) at Hershey Bears (11-4-2)
The Phantoms are 4-2-0 against Hershey. 37-year-old captain Matt Moulson paces the attack with six goals. The former NHL’er had three straight seasons of 30+ goals with the Islanders a decade ago…including one season with head coach Scott Gordon. Zayde Wisdom has scored three of his seven goals against Hershey and Ryan Fitzgerald has also scored thrice against the Bears. Derrick Pouliot has scored 2-3-5 against the Bears including a game-winning goal with 5:59 left in the third period on March 3 at PPL Center.

Saturday, April 3, 7:05 p.m. – PPL Center, Allentown, PA
Lehigh Valley Phantoms (10-3-2) vs. Wilkes-Barre/Scranton Penguins (5-7-4)
The streaky Penguins are on a seven-game winless slide on the other side of a six-game point surge. The Phantoms are 2-1-1 against the Penguins with a pair of overtime wins. Ryan Fitzgerald had the winner at Wilkes-Barre on Monday, March 8 and Tanner Laczynski scored in overtime vs. the Penguins at PPL Center on Sunday, March 21. Max Willman has three of his seven goals against the Pens. 30-year-old NHL veteran Tim Schaller leads the Penguins with six goals. Second-year pro Jordy Bellerive has also found the back of the net a half-dozen times.

Monday, April 5, 2021, 7:05 p.m. – Newark, NJ
Lehigh Valley Phantoms (10-3-2) vs. Binghamton Devils (3-7-4)
This game was originally scheduled for Friday, April 9 but was moved to April 5 to accommodate NHL New Jersey Devils schedule adjustments. The Devils started the season 2-0-0 but have just one win in 12 games since. Lehigh Valley is 4-0-1 against the Devils including back-to-back wins last weekend 3-2 and 6-3. The Binghamton Devils are playing all of their home games this season in Newark in the practice rink at Prudential Center. Max Willman and Tanner Laczynski both have scored four goals against Binghamton this season. Ben Thomson has scored all three of his goals against the Phantoms. The Devils are led by 34-year-old captain Ben Street who has scored 5-9-14. Street currently sits at 499 career pro points and 299 pro assists. 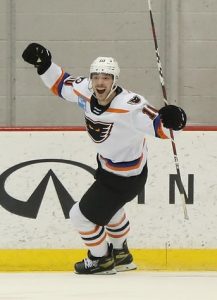 Tann the Mann
Tanner Laczynski recorded the team’s first hat trick in almost exactly two years with his incredible between the legs move on a shorthanded breakaway in Newark to cap a 3-2 comeback win. Laczynski had scored on the power play earlier in the period to tie the game. The red-hot rookie out of Ohio State has all six of his goals this season in the last four games. 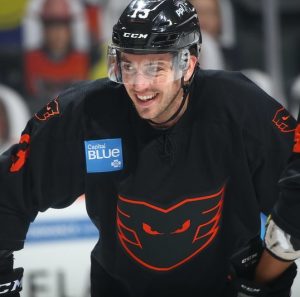 Fitzy Flings It
Ryan Fitzgerald scored twice on Saturday to take the team lead in goals with eight. He also has four power-play goals and two overtime goals this season. He has been especially strong against his Dad’s team scoring three goals and two assists vs. Binghamton this season. Ryan’s Dad is Tom Fitzgerald who is general manager of the New Jersey Devils. 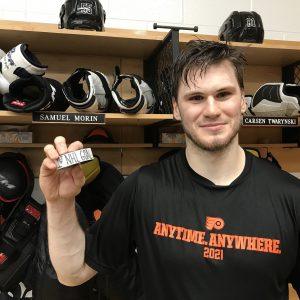 Sammy’s Success
Hard-working Phantoms product Samuel Morin received a recall to the Philadelphia Flyers last week and proceeded to score his first career NHL goal on Saturday against the New York Rangers for the game-winner with just over 4:00 left. The 25-year-old big man is back at defense after battling through two knee surgeries and other injuries that severely limited his playing time for the last three years. An exuberant Morin celebrated with his overjoyed friends and teammates and said, “It is probably the best moment of my life.”