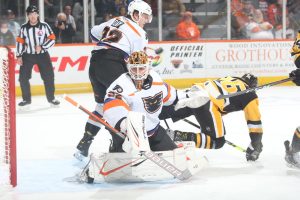 Weekly Recap
Wednesday, November 3: Phantoms 4 – Wilkes-Barre/Scranton 0
Felix Sandstrom recorded his first career AHL shutout with a 25-save effort that included backstopping a perfect 8-for-8 penalty kill and the Phantoms turned away the rival Penguins 4-0. Maksim Sushko and Tyson Foerster scoredd in the first period for Lehigh Valley. Then Hayden Hodgson scored early in the third for a little more comfortability followed by Gerry Mayhew’s empty-netter to put the game on ice. Morgan Frost had a pair of assists in the team’s first win of the season.

Saturday, November 6: Charlotte 7 – Phantoms 3
The Checkers took advantage of an early five-minute power play and the Phantoms had a tough time recovering as they fell behind 3-0 in the game’s first 10 minutes. Lehigh Valley twice pulled the margin to within two goals at 4-2 and 5-3 but the Checkers had a quick response each time. Zac Dalpe led Charlotte with two goals. Isaac Ratcliffe scored his first of the year for the Phantoms and Jackson Cates scored is first career pro goal on a shorthanded breakaway.

Sunday, November 7: Phantoms 5 – Charlotte 3
The Phantoms put forth a determined and energetic bounceback effort in the Sunday afternoon weekend finale. Felix Sandstrom had 35 saves on 38 shots and was especially strong in net. Linus Hogberg had a key block with 3:30 left when the Phantoms were protecting a one-goal lead. Adam Clendening led the offense with three assists while Morgan Frost had his third multi-point game in the last four with two helpers.
Cam York scored his first of the season and Egor Zamula had his first as a pro to lead the way. Max Willman scored his second of the weekend and Hayden Hodgson scored his third in the past five games while Garett Wilson added an empty-netter.

Upcoming
Wednesday, Novemer 10, 7:00 – Phantoms at Hershey Bears (Giant Center, Hershey)
The Phantoms lost at Hershey on October 17 in a 2-1 decision in Chocolatetown. This is the second game out of 14 this season between the Keystone State rivals. Hershey is 5-2-3. The Bears had points in 14 consecutive home games before a 3-0 loss against Providence on November 6. Phantoms alum Mike Vecchione is tied for the Hershey lead in scoring with 8 points on one goal and seven assists. 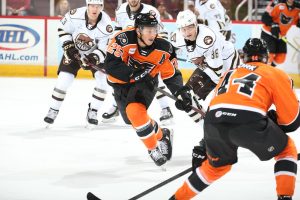 Friday, November 12, 7:05 – Phantoms at Providence Bruins (Dunkin Donuts’ Center, Providence)
The Phantoms conclude their four-game road swing at the Providence Bruins on Friday night. 23-year-old center Oskar Steen leads the P-Bruins with 5 goals and 5 assists for 10 points in just 6 games played in the AHL this season. The Bruins are 4-3-2 overall and have gone 3-1-0 in their last four games including a 31-save shutout for Jon Gillies at Hershey in a 3-0 win on Saturday.

Saturday, November 13, 7:05 – Springfield Thunderbirds at Phantoms (PPL Center, Allentown)
– POSTGAME SKATE PRESENTED BY T-MOBILE
– LIVE PERFORMANCE BY STACY GABEL FOR SATURDAY NIGHT HOCKEY LIVE
The first-place Thunderbirds await the Phantoms in Lehigh Valley’s next home game on Saturday night. The new affiliation of the St. Louis Blues is 7-1-2 after sustaining its first loss of the season on Sunday, November 7 at Hershey in a 5-3 setback. Defenseman Scott Perunovich is tied for the AHL lead in scoring with 16 points on two goals and 14 assists. The Round 2 selection of the Blues out of the University of Minnesota-Duluth was teammates with Jackson Cates. Nolan Stevens is the son of former Philadelphia Phantoms captain and head coach John Stevens. The former Flyers head coach is now an assistant coach with the Dallas Stars.

Notes and Standouts
— Egor Zamula and Jackson Cates both scored their first pro goals last weekend.
— The Phantoms have won two of their last three games.
— Felix Sandstrom has started the last four games in net. He posted his first career AHL shutout last Wednesday.
— Morgan Frost has multi-point games in three of the last four games scoring 1-5-6 in that stretch.
— Max Willman has scored goals in consecutive games. 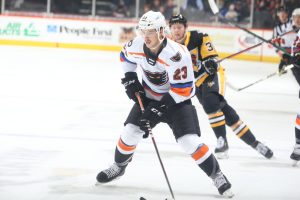 The Lehigh Valley Phantoms return home on Saturday against the Springfield Thunderbirds in the next Saturday Night Hockey Live game at PPL Center also including a postgame skate presented by T-Mobile. Bring your skates to join the fun on the ice after the game! Plus Stacy Gabel will be the featured performer in the team’s season-long concert series.
Tickets for all Phantoms home games are available HERE