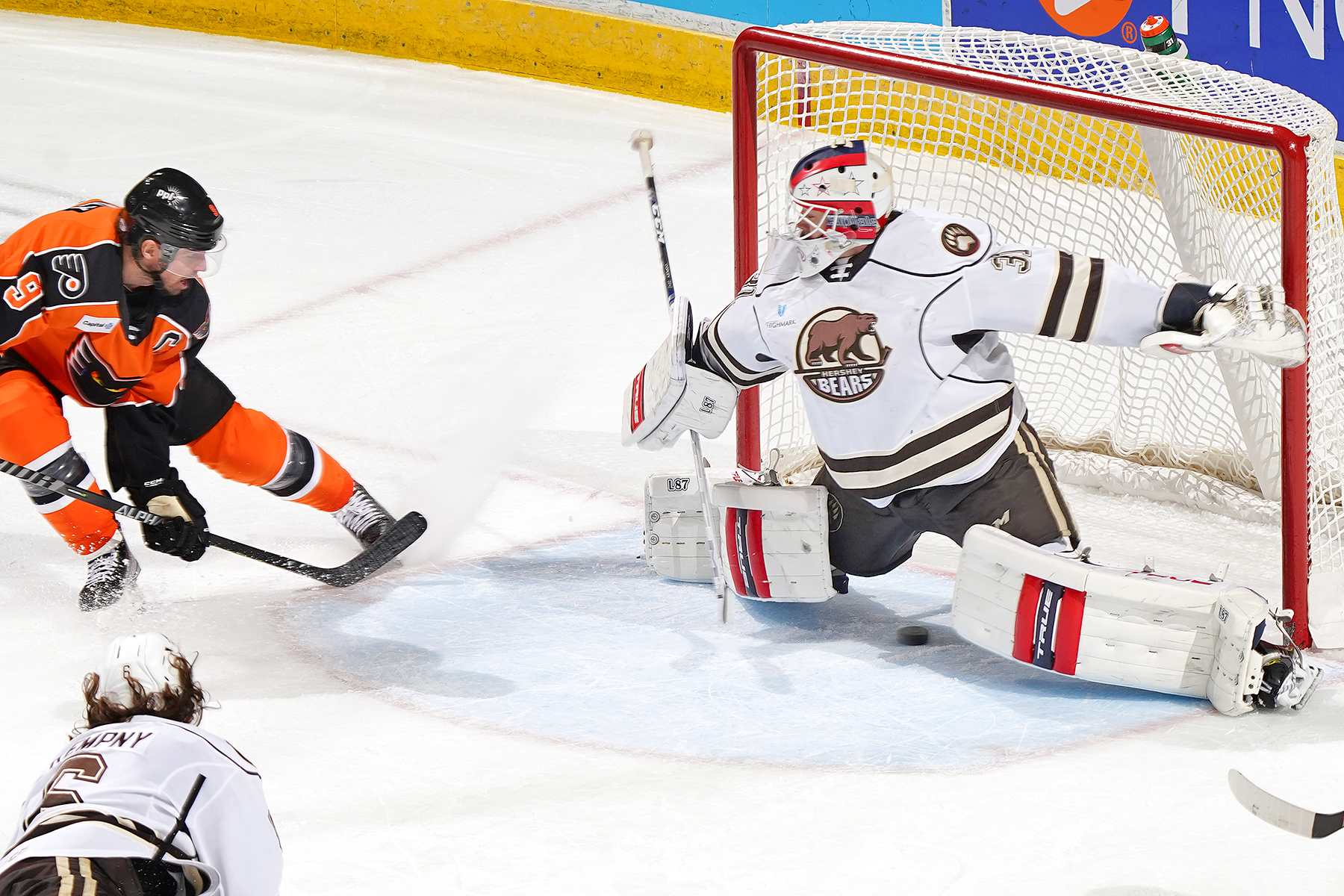 Hershey, PA – The Lehigh Valley Phantoms scored twice on the same Hershey power play to pull away from the Bears in a 4-1 win at Giant Center on Wednesday night. Jackson Cates and Cal O’Reilly knocked through the consecutive shorthanded goals late in the second period to demoralize the hosts and allow the Phantoms to finish off the victory from there.

Felix Sandstrom received his fifth consecutive start and was very strong with a 31-save performance. Max Willman scored even strength and Gerry Mayhew had a power-play goal to begin the team’s four-goal outburst in the middle period which was the highest-scoring single period of the season for the Phantoms.

The Phantoms now lead the AHL with four shorthanded goals and Jackson Cates is tied for the league lead with his two shorties equaling the total of Ben Jones of the Henderson Silver Knights. 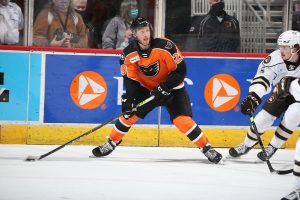 Lehigh Valley has gone 3-1-0 on its last four games and will finish its four-game road swing on Friday night at the Providence Bruins.

Hershey struck first with an early goal by Mike Sgarbossa (5th) shortly after a faceoff win as he drove to the net and took advantage of some missed coverage.

The Bears out shot the Phantoms 7-1 to open the contest but Lehigh Valley gained momentum after the slow start and put Hershey on its heels.

Max Willman opened the second period with a goal in the first minute as he cut across the low slot to get a piece of a turn-around shot from Cal O’Reilly from near the left boards. Willman’s fifth of the season also extended his goal scoring streak to three straight games.

Later in the second period, it was Gerry Mayhew (5th) deflecting in the slot a nice feed from the left dot by Logan Day who had initially looked like he was going to shoot. Morgan Frost began that power play sequence from the right boards by connecting with Day well across the ice. Frost’s team-leading eighth assist of the season was also his seventh point in the last five games (1-6-7).

Hershey appeared to have a healthy opportunity to equalize late in the second period when Ryan MacKinnon was assessed a tripping penalty. But instead it was the Phantoms’ time to shine. Connor Bunnaman perfectly placed a long lead-pass from the Phantoms blue line that Jackson Cates was able to chase down just before the faceoff dot. Cates caught up to the puck and still had enough angle to fire off a big blast for his second shorthanded goal in the last three games to give the Phantoms a 3-1 lead with 6:04 remaining in the period. 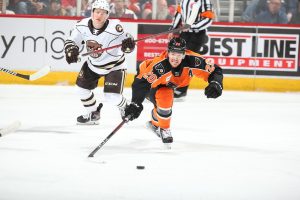 Less than a minute later, the active stick of Max Willman knocked the puck away. He did a little stop-and-go move up the right-wing pulling it backhand and then surging back to his forehand to find an opening to connect with Cal O’Reilly on the backdoor who chipped in his first of the season for the backbreasking conversion and a 4-1 lead with 5:20 to go in the frame.

Hershey pulled goalie Pheonix Copley with 3:30 left but even with the extra attacker the Bears were never able to seriously threaten on net. Sandstrom nicely handled some of the big blasts from the Bears snipers that mostly came from the outside.

Lehigh Valley and Hershey are now even at 1-1 in the season-rivalry series.