Tuesday, April 26, 2022
Springfield Thunderbirds 5 – Phantoms 0
The Phantoms couldn’t break through against T-Birds goalie Joel Hofer in the opener of the last homestand of the season. The Phantoms trailed 1-0 for most of the game in a tight goalie contest with Pat Nagle keeping the contest tight. The T-Birds finally broke through in the third period.

Wednesday, April 27, 2022
Cleveland Monsters 6 – Phantoms 1
Similar to the previous night, the game was a close contest for the first half before the tables turned after the midway point. Adam Johnson scored in the first period for a 1-1 tie. The Monsters were led by a pair of power-play goals by Cole Fonstad in the late scoring surge. 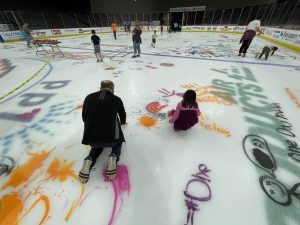 Saturday, April 30, 2022
Phantoms 3 – Wilkes-Barre/Scranton Penguins 0
Felix Sandstrom returned to the Phantoms from the Flyers with a 26-save shutout, the second of his AHL career. Linus Sandin, Cal O’Reilly and Isaac Ratcliffe scored for the Phantoms in the season finale. The Phantoms players took a curtain call during the game’s Three Stars to salute and celebrate with the fans.

Sunday, May 1, 2022
PAINT THE ICE!!
Fans returned to PPL Center to send their messages and show their creativity in the team’s annual Paint the Ice event, presented by Dorney Park.

We can’t wait to see you again when hockey returns to PPL Center in September with the Philadelphia Flyers Rookie Series in a weekend of games against the prospects and rookies from the New York Rangers.

TRANSACTIONS
Pat Nagle has been loaned to the Reading Royals for their Kelly Cup Playoff run. Nalge had 3o saves on 31 shots in Reading’s 2-1 win over the Main Mariners on Monday. The Royals won the series 4 games to 2 to advance to the second round. 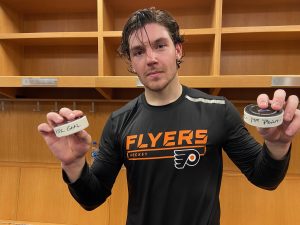 – Cal O’Reilly set a new personal best for goals. The 35-year-old captain led the Phantoms with 21 goals and eclipsed his former career-high of 18 goals in a season which he set 15 years ago.
– Cal O’Reilly celebrated his 1000th pro game on March 25, 2022. Adam Clendening played in his 500th pro game and Garrett Wilson played in his 500th AHL game.