Phantoms Home for Back-to-Back This Weekend

Lehigh Valley, PA – The Lehigh Valley Phantoms return to PPL Center to host the Laval Rocket and Hartford Wolf Pack on Friday and Saturday. These are the last home games in the month of March for the Phantoms. A six-game road-trip begins Sunday. 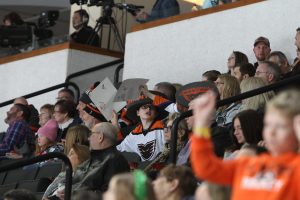 Wednesday, March 2, 2022
Providence Bruins 5 – Phantoms 3
The Phantoms rallied to tie the game in the second period against relief goalie Kyle Keyser on goals by Hayden Hodgson and Matt Strome but the Bruins broke the deadlock in the opening minute of the third and held on the rest of the way tacking on an empty-netter at the end. Morgan Frost was creating and energetic in his first game back with Lehigh Valley.

Friday, March 4, 2022
Charlotte Checkers 5 – Phantoms 2
Matt Strome recorded his first-career multi-goal game but otherwise the Phantoms were unable to break past Charlotte goaltender Spencer Knight. Cal O’Reilly became just the 41st player in AHL history to appear in 800 games. After Strome’s opening strike just two minutes in, the Checkers quickly responded with a pair of goals in the next five minutes to take a 2-1 lead and never looked back from there.

Saturday, March 5, 2022
Charlotte Checkers 5 – Phantoms 2
Cal O’Reilly and Morgan Frost scored in the third period in a comeback effort that fell short. The Checkers had raced out to a 4-0 lead by the early minutes of the second period and made the most of their 19 shots on goal in the victory. Felix Sandstrom entered in relief of Pat Nagle. Jackson Cates had a scary injury in the second period crashing into the end boards but has since been released from the hospital and all tests came back normal.

Tuesday, March 8, 2022
Hershey Bears 4 – Phantoms 0
Lehigh Valley couldn’t get their offense rolling as Zach Fucale avenged recent losses at PPL Center with a 26-save shutout of the Phantoms. Beck Malenstyn paced the Bears’ attack with two goals and one assist. Felix Sandstrom and Zach Fucale were engaged in a hard goaltenders’ duel that remained deadlocked at 0-0 by the midway mark of the game before the Bears broke through a few seconds later. Consecutive goals to open the third period gave Hershey a little breathing room in just its second regulation win against Lehigh Valley this season. 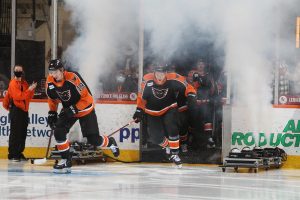 Upcoming
Friday, March 11, 2022 (7:05) – Phantoms vs. Laval Rocket (PPL Center)
Lehigh Valley (18-24-10) opens a weekend homestand against the Laval Rocket (25-19-3), AHL affiliate of the Montreal Canadiens. It is the first meeting of the season between the Phantoms and Laval, who currently rate third in the North Division. Popular Phantoms’ alum Danick Martel has scored nine goals with nine assists.
Goalie Cayden Primeau, son of former Flyers’ captain Keith Primeau, is 11-9-1, 2.80, .912 with the Rocket and has also played in 11 NHL games this season with Montreal going 1-7-1, 4.88, .866. The former Northeastern University standout grew up in Voorhees, NJ where he played for Bishop Eustace Prep and the Philadelphia Revolution.

Saturday, March 12, 2022 (7:05) – Phantoms vs. Hartford Wolf Pack (PPL Center)
Hartford (27-16-7) enters the week with a three-game point streak and is hanging on to third-place in the Atlantic Division. Head coach Kris Knoblauch was previously an assistant coach on the Flyers along with current Phantoms’ head coach Ian Laperriere. Lehigh Valley is 3-2-0 against Hartford this season including a 26-save shutout for Pat Nagle at XL Center on January 29. But the Wolf Pack won the most recent matchup in a wild 6-4 contest on February 5 at PPL Center with Hartford overcoming an early 2-0 deficit via a five-goal outburst in the second period. Captain and leading scorer Jonny Brodzinski (18-21-39) is currently up with the New York Rangers. Rookie Austin Rueschoff’s 13 goals is tops among active Pack players. Veteran goalie Keith Kinkaid is 18-5-2, 2.63, .913

Sunday, March 13, 2022 (5:00) – Phantoms at Hershey Bears
The Phantoms wrap up the busy weekend with a rematch engagement at the Hershey Bears on Sunday evening. Lehigh Valley leads the season series with a 5-2-1 record against Hershey. Phantoms’ alum Mike Vecchione is tops among active Hershey Bears scoring 12-24-36. 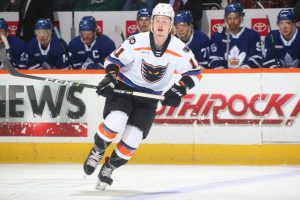 Allison is Back:
Wade Allison has been activated from the Flyers’ injured reserve and loaned to the Phantoms. The  hard-shooting winger has played just eight total games this season, including seven with the Phantoms. Allison has dealt with three different injuries limiting his playing time this season. His last game was January 22 for the Philadelphia Flyers at Buffalo Sabres where he sustained a knee injury.

News and Notes:
– Cal O’Reilly became just the 41st player in AHL history to play in 800 games. Cal is also currently at 993 pro games (AHL, NHL, KHL combined) and is projected to play in his 1,000th pro game on March 25 at Laval
– The Phantoms have played 52 games and have 24 remaining with less than two months to go in the 2021-22 regular season.
– Hayden Hodgson leads the Phantoms with 16 goals and has four goals in the last seven games as well as 10 goals in the last 18 games. Hodgson is returning to action following a three-game suspension.
– On Tuesday at Hershey, the Phantoms were shut out for only the second time this season.