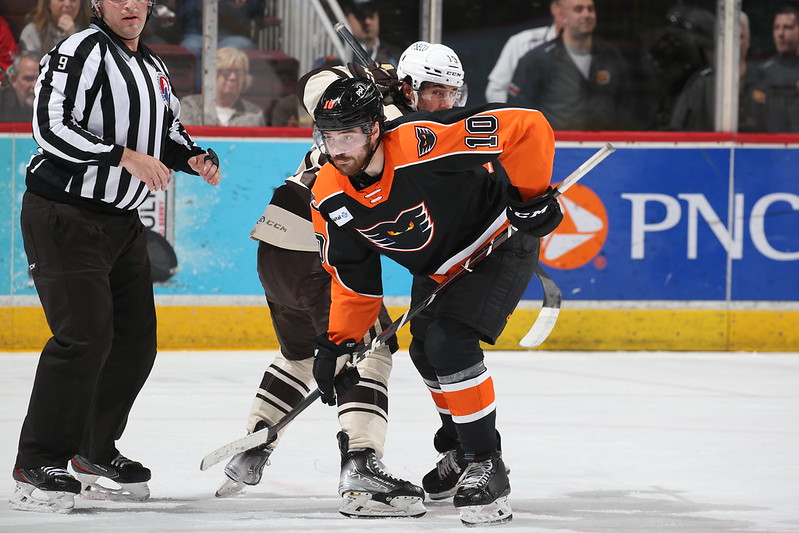 Hershey, PA – The Bears struck back. After seven rivalry games largely dominated by the Phantoms, Hershey climbed one game closer in the rivalry series via a 26-save shutout by Zach Fucale and a 4-0 win on Tuesday night at Giant Center. Lehigh Valley’s record against the Hershey Bears now moves to 5-2-1.

Beck Malenstyn (6th, 7th) scored a pair of goals and added a poke-check steal-assist on another to pace the offense. 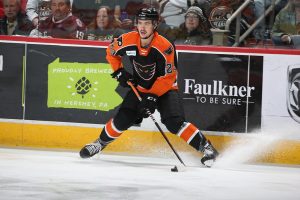 Lehigh Valley was snake-bit repeatedly despite developing several strong chances, particularly in the third. But Fucale, whom the Phantoms embarrassed on February 11 with five goals on just 13 shots, was on top of his game in a performance that was perhaps more meaningful for him given Lehigh Valley’s recent success against him.

Felix Sandstrom was on top of his game early for Lehigh Valley (18-24-10) with the Bears enjoying an early 7-0 shots advantage. Sandstrom stopped them all and added a short breakaway stop as well to keep the game 0-0 after one period.

Just after the midway mark of the game, Malenstyn and the Bears would break through. A deflection of a point-shot from Dylan McIlrath at 10:21 into the second period would get the Bears on the board. Sandstrom was still vital in the Phantoms’ chances though and the Lehigh Valley backstop made several key denials to keep the team within a goal.

Hershey (27-21-7) had a carry-over power play to open the third period and would end up scoring just seconds after the man advantage had expired. Malenstyn jabbed the puck away from a Phantoms’ defender in the corner and Brett Leason (2nd) would slip through to the crease to push a backhander home for a 2-0 lead.

Just barely over two minutes later, Garrett Pilon would strike on a rebounding puck for a 3-0 advantage. Beck Malenstyn blocked a shot that he turned into a long empty-netter from behind the Hershey blue-line with 2:12 left to finish the scoring.

The Phantoms had come charging back when they were trailing 3-0 with some stronger opportunities in efforts to cut into the lead but were unable to break through. But Lehigh Valley had some solid chances earlier in the contest as well.

A shot that got through the legs of Fucale was still somehow kicked away before it would make it to the line. Brennan Saulnier was on top of the crease for a try in the first period but Fucale got a right pad on the opportunity.

Second period opportunities included a glorious chance from Adam Johnson down low after a steal by Linus Sandin. But a quick poke-check by Fucale combined with a bouncing puck stymied the Phantoms winger. Garrett Wilson rushed up ice with Morgan Frost but Wilson’s shot went off Fucale’s chest for a save.

Bunnaman had a steal and an attempt to stuff one home on the left pad of Fucale for the team’s first shot of the third period but just couldn’t get it to go.

Frost dangled his way in for a try but the puck rolled off when he attempted to shoot. Another 2-on-1 for Garrett Wilson emerged with speedy Charlie Gerard but the backdoor try bounced off the left pad of the quick thinking Fucale. Gerard had a chance after the kick but Fucale was ready for that one too.

Finally, with the game well in hand for the Bears, Connor Bunnaman’s backhander from the left of the cage with under a minute left rang off the crossbar and stayed out thus allowing Fucale to preserve his shutout.

The Phantoms and Bears will rematch on Sunday at Giant Center with a 5:00 p.m. tilt. The two teams have played each other eight times and still have six games remaining in their season-long rivalry series.

The Phantoms return to PPL Center for a pair of home games this weekend hosting the Laval Rocket on Friday and then the Hartford Wolf Pack on Saturday.