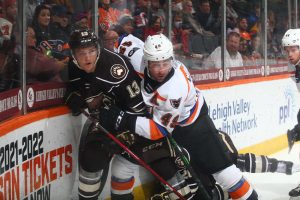 Weekly Recap
Tuesday, December 21
Phantoms 2 – Hershey Bears 1
Charlie Gerard scored his first goal with the Phantoms and Connor Bunnaman extended his goal-streak to three games in a 2-1 rivalry win over the Hershey Bears in the last game before the Holiday Break. Pat Nagle was barely more than three minutes away from his first career shutout before the Bears finally broke through. Lehigh Valley is on a five-game point streak and improved to 2-1-0 against the Bears

Upcoming
Friday, December 31, 5:00 – Phantoms at Utica Comets
The Phantoms close out 2021 against the top team in the league. The affiliate of the New Jersey Devils raced out to an AHL-record 13-0-0 start and have hardly slowed down since then with only one regulation loss in 21 games played (18-1-2). Many of these players came from the Binghamton Devils team that had only seven wins for all of last season. Former Flyers captain Kevin Dineen is the head coach of the Comets who has led the turn-around. Defenseman Reilly Walsh leads the Comets with 4-13-17. Utica took a 5-2 decision over the Phantoms on October 29. 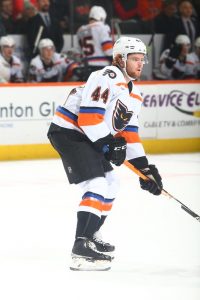 Schedule Adjustments:
The Phantoms away game on Wednesday, December 22 at Hershey was postponed due to AHL COVID-19 protocols affecting the Hershey Bears. A make-up date has not been announced.

The Phantoms home game on Wednesday, December 29 vs. Cleveland was postponed due to AHL COVID-19 protocols affecting the Cleveland Monsters. A make-up date has not been announced. Fans with tickets for the December 29 game should hold on to their tickets which will be good for tjhe make-up date. Fans wishing to exchange their tickets for a different home game can do so by reaching out to the Phantoms: ticketsales@phantomshockey.com