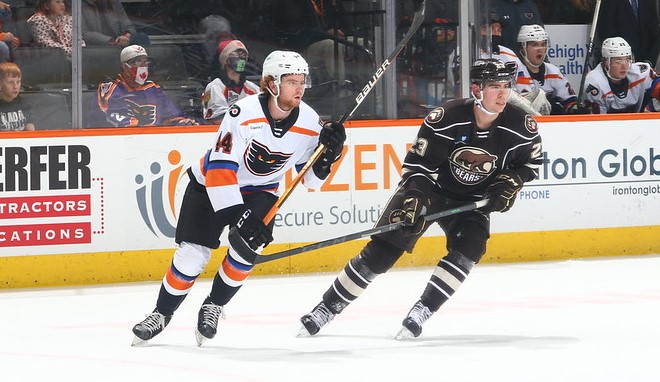 Lehigh Valley, PA – The Philadelphia Flyers announced the recalls of defenseman Cam York and goalie Kirill Ustimenko from the Lehigh Valley Phantoms to the NHL Taxi Squad according to Flyers President of Hockey Operations and General Manager Chuck Fletcher.

York, 20, was the #14 overall selection in the 2019 NHL Draft. The Anaheim, CA native out of the University of Michigan has scored one goal with seven assists in 21 games with the Phantoms this year. Last season, he played in three games with the Flyers registering no points in the NHL while also recording two goals and three assists with the Phantoms in eight games during his professional debut season. This is York’s first recall this season. One year ago, York was the captain of the USA World Juniors team that captured the Gold Medal with a 2-0 win over Canada.

Ustimenko, 22, was a Round 3 pick in the 2017 NHL Draft from Gomel, Belarus. The 6’3″ backstop has played in two games with the Phantoms this season. Ustimenko was most recently on the roster of the ECHL Reading Royals where he has gone 0-4-2, 4.09, .893 in seven games played. He was especially strong in his first season in North America in 2019-20 when he went 19-4-5, 2.40, .919 with Reading while also playing in five games with the Phantoms. Ustimenko missed most of the 2020-21 season when he had hip surgery after playing only two games in the Belarus League.

The Phantoms return to action on Friday night with an away game at the Utica Comets starting at 5:00 p.m. in the New Year’s Eve tilt.
The Phantoms will ring in the New Year with a home game on Saturday, January 1 at 6:05 p.m. against the Bridgeport Islanders.