Lehigh Valley, PA – The Lehigh Valley Phantoms (14-13-3) open play in 2023 with three consecutive road games including trips this weekend to the Rochester Americans and Toronto Marlies. The roster has been reloaded entering the new year with the official arrival of forward Bobby Brink and the return of forward Olle Lycksell and defenseman Kevin Connauton.
Toronto (20-9-2) and Rochester (17-9-2) are the top two teams in the North Division. The Americans currently carry a six-game win streak which is the longest active win streak in the AHL. 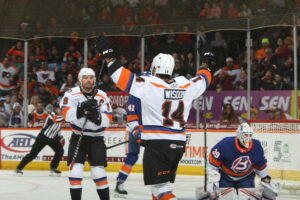 WEEKLY RECAP
Wednesday, December 28, 2022
Phantoms 6 – Islanders 5 (SO)
The Phantoms won in a wild see-saw affair against Bridgeport when Cal O’Reilly scored the deciding goal in the sixth round of the shootout. Cooper Marody scored twice as the Phantoms rallied from 3-2 deficit. Zayde Wisdom notched his first of the year and Elliot Desnoyers scored his team-leading 12th of the season while Adam Brooks contributed his third. Bridgeport bounced back from a 5-3 deficit and forced overtime with former Phantom Andy Andreoff tying the contest with just 48 seconds remaining.

Friday, December 30, 2022
Comets 3 – Phantoms 1
Cal O’Reilly recorded his 545th career assist to move into seventh all-time in AHL history and Max Willman scored in his first game back with the Phantoms since November 12. But Nolan Foote struck for a pair of power-play goals for host Utica as the Comets held off the Phantoms in the last away game of the season.

Saturday, December 31, 2022
Penguins 4 – Phantoms 1
Marody scored his third goal of the week on the rebound of a Tyson Foerster power-play blast but Lehigh Valley could muster no further offense in the team’s New Year’s Eve 2022 finale at PPL Center. Wilkes-Barre/Scranton markers from Valtteri Puustinen, Alex Nylander and Drake Caggiula helped lead the way in the rivalry matchup. The festive New Year’s Eve fun continued after the game on Hamilton Street with the World’s Largest Puck Drop ringing in 2023. 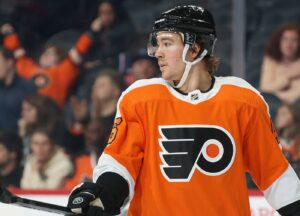 RELOADED
The Lehigh Valley Phantoms received forward Olle Lycksell back from a recall to the Flyers and defenseman Kevin Connauton from his trip to Switzerland to compete with Team Canada at the prestigious Spengler Cup.
Even more exciting is the official addition of forward Bobby Brink who is in line to make his potential AHL debut this weekend. The Flyers’ second-round selection in 2019 out of the University of Denver was the NCAA scoring champ last year scoring 14-43-57 in just 41 games making him a Hobey Baker Award Hat Trick finalist. Brink has been practicing and rehabbing in Allentown with the Phantoms and has been with the team since November before being officially activated and added to the roster on Tuesday.

PHANTASTIC!
– Elliot Desnoyers is fourth among AHL rookies with 12 goals and also leads the Phantoms in lamplighters
– Max Willman scored in his first game back with the Phantoms on Friday, December 30 at Utica. Willman had been with the Philadelphia Flyers since November 14. The December 30 game was also his 100th all-time with the Phantoms.
– Cal O’Reilly played in his 1,000th North American pro game on Friday, December 30 at Utica and also passed AHL Hall of Famer Jody Gage for 7th all-time in AHL history with his 545th career assist. O’Reilly had already achieved his 1,000th OVERALL pro game last year on March 26 (including pro games in the KHL).
– Cooper Marody has three goals in the last three games and four goals in his last six games. The University of Michigan product had back-to-back campaigns scoring 21 goals with the Bakersfield Condors (Edmonton) before joining the Phantoms. 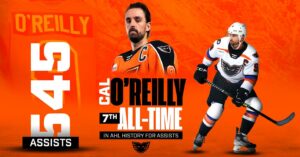 UPCOMING
Friday, January 6, 2023 (7:00)
Blue Cross Arena, Rochester, NY
Phantoms at Rochester Americans
Rochester (17-9-2) is on a six-game win streak entering their Wednesday night game against the Belleville Senators. They have closed to within six points of the first-place Toronto Marlies with three games-in-hand. The Phantoms crushed the Amerks 5-1 on November 26 at PPL Center while outshooting their opponents 40-15 in a dominating performance led by Olle Lycksell with four points on one goal and three assists and Artem Anisimov with two goals and one assist. Penn State product Brandon Biro (9-19-28) leads the Amerks. 2021 First-rouders Isak Rosen (3-12-15) and Jiri Kulick (6-10-16) are both away from the team while competing at the World Juniors tournament in Halifax with Sweden and Czechia respectively. Malcolm Subban (7-2-1, 2.96, .905) has established himself as the team’s #1 goalie with five victories over the latest six-game win streak.

Saturday, January 7, 2023 (4:00)
Coca-Cola Coliseum, Toronto, ON
Phantoms at Toronto Marlies
The Toronto Marlies (20-9-2) have been the cream of the crop in the North Division this season but the hard-charging Rochester Americans are hot on their heels. Toronto recently had a five-game win streak and seven-game point streak snapped with a 3-2 loss against Rochester on New Year’s Eve. Logan Shaw (11-22-33) lead the Marlies and the 30-year-old veteran also brings 232 games of NHL experience to the team with stints in Ottawa, Winnipeg, Montreal, Anaheim and Florida. Free-agent talent from Notre Dame Alex Steeves scored 23 goals last year as a rookie and already has 11-18-29 this year. Joseph Woll (7-0-0, 2.29, .926) has been perfect between the pipes. Head coach Greg Moore will be at the bench for the North Division for the AHL All-Star Classic next month in Laval by virtue of having the best divisional record on New Year’s Day. Moore played for the Adirondack Phantoms for most of the 2010-11 season before he was traded to the Columbus organization in exchange for Tom Sestito at the February deadline. 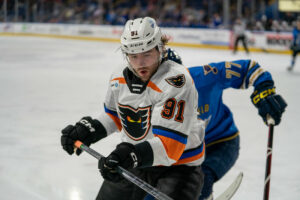