Coming Home with a Win Streak

Lehigh Valley, PA – The Lehigh Valley Phantoms (19-14-5) open a season-long five-game homestand at PPL Center following a perfect 3-0-0 road trip to Cleveland and Wilkes-Barre/Scranton. The Phantoms are tied for fourth place in the Atlantic Division and will tangle with rivals Hershey (twice) and Wilkes-Barre/Scranton this week.
Upcoming home games on Wednesday, Friday and Saturday also include some great promotions:
– Wednesday is Pregame Happy Hour with $2 Milller Lites and Yuenglings
– Friday is Flyers Night featuring Gritty and also legendary Flyers P.A. Announcer Lou Nolan
– Saturday is meLVin Youth Winer Hats from Lehigh Valley Reilly Children’s Hospital for the first 2,000 fans age 12 and under 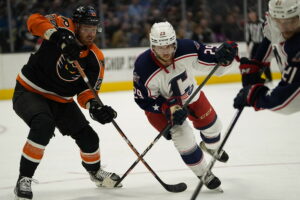 WEEKLY RECAP
Tuesday, January 17, 2023
Phantoms 3 – Monsters 1
Lehigh Valley took a series-opening win at the Cleveland Monsters on goals by Ronnie Attard (5th) and Louie Belpedio (3rd) as well as an empty-netter by Bobby Brink (3rd). Felix Sandstrom backstopped the victory with 28 saves on 29 shots. Lehigh Valley’s penalty kill was key in the triumph with a perfect 6-for-6 performance including three straight kills in the first period.

Wednesday, January 18, 2023
Phantoms 2 – Monsters 1 (OT)
The Phantoms largely dominated the Cleveland Monsters and eventually broke through against goalie Jet Greaves when Louie Belpedio (4th) scored his second overtime winner of the season after a breakaway retrieval by Artem Anisimov. Olle Lycksell (7th) also struck for the Phantoms while Felix Sandstrom finished up his two-week conditioning loan with a 20-save performance.

Friday, January 20, 2023
Phantoms 5 – Penguins 2
Tyson Foerster (12th, 13th) scored a pair of goals for the Phantoms while Wyatte Wylie (2nd), Bobby Brink (4th) and Jordy Bellerive (4th) also tickled the twine in a dominating win at Wilkes-Barre/Scranton. Cal O’Reilly’s assist on Wyatte Wylie’s goal in the first period propelled the Phantoms’ captain into elite company with is 700th career point as he became only the 25th AHL player to achieve the milestone. The Phantoms blew away the Penguins with a season-best four-goal outburst in a single period basically putting away the game in the impressive second period. Sam Ersson returned to the Phantoms and racked up 28 saves in his first game back with Lehigh Valley. The two rivals got feisty in the third period with four separate fights including Bobby Brink’s first career pro fight and Hayden Hodgson’s heavyweight tilt against Jamie Devane. 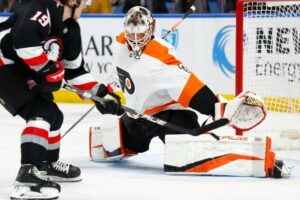 SAM IS BACK!
Goaltender Sam Ersson is back with the Phantoms after a successful and memorable stretch with the Philadelphia Flyers over the past month. Ersson made his NHL debut (December 23 at Carolina), posted his first NHL win (December 29 at San Jose) and his first career shutout (January 9 at Buffalo) while accumulating a perfect 5-0-0 record with a 2.37 GAA and .918 save percentage. With the Phantoms this season, Ersson has now gone 10-8-1, 2.76, .911 in 19 games.

THANKS, FELIX!
Felix Sandstrom concluded his two-week conditioning loan with the Phantoms with another success in the form of a 2-1 overtime win at the Cleveland Monsters last Wednesday. Sandstrom started all seven games for Lehigh Valley in his 14-day stretch down from Philadelphia and went 4-1-2, 2.39, .911 including three games allowing just a single goal. On Tuesday, January 17 at Cleveland, Sandstrom came just 19.8 seconds away from recording his third career shutout in the AHL. His best game was perhaps January 11 at Bridgeport with 35 saves in a 3-1 win that also saw him turn aside 18 consecutive denials in the third period in preserving the lead. 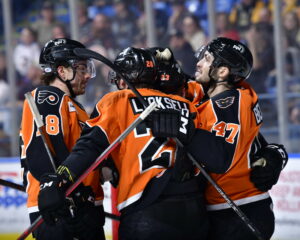 PHANTASTIC!
– The Phantoms went 3-0-0 on their recent road-trip and have won four consecutive away games. Lehigh Valley is 5-0-1 on the road in January through a busy travel schedule.
–  Tyson Foerster has surged to a tie in the team-lead in goals with Elliot Desnoyers. Both young talents have 13 goals apiece and also both turned 21 years old last week. Foerster has a pair of two-goal games recently with performances on January 13 vs. Bridgeport and January 20 at Cleveland.
– Cal O’Reilly notched an assist on Friday at Wilkes-Barre/Scranton to become the 25th player in AHL history to reach the 700-point milestone. O’Reilly is 7th all-time in AHL history with 546 career assists.
– Bobby Brink has scored four goals in seven games with the Phantoms since his debut on January 6 and all four have come in different arenas: Rochester, Bridgeport, Cleveland, Wilkes-Barre/Scranton. Brink has yet to score a goal at PPL Center.
– Jackson Cates has racked up four assists in the last three games with a pair of multi-helper nights on January 17 and January 20.
– Lehigh Valley is a perfect 14/14 on the penalty kill in the last four games.
– The Phantoms are….
14-4-4 when scoring 3 or more goals
16-1-1 when allowing 2 goals or fewer
13-3-5 in one-goal games
10-1-5 when scoring the first goal
12-0-4 when leading after two periods
4-3 in overtime and 2-2 in shootouts

UPCOMING
Wednesday, January 25, 2023 (7:05)
PPL Center, Allentown, PA
Phantoms vs. Hershey Bears
Hershey (26-8-4) is tops in the Atlantic Division and second-best in the AHL. The Bears have largely done it with defense and goaltending having limited the opposition to a league-best 2.4 goals per game. Hunter Shepard is the top goalie in the AHL with a 2.12 goals-against average to accompany his 11-1-3 record. Mike Sgarbossa (14-22-36) is healthy and has returned to his top form leading the team in points while striking for four goals against Lehigh Valley. Western Michigan University product Ethen Frank leads all AHL rookies with 18 goals including tree against the Phantoms. Hershey’s power play is 6/21 (28.6%) against the Phantoms. Lehigh Valley and Hershey will square off four times over a six-game stretch in just 11 days. 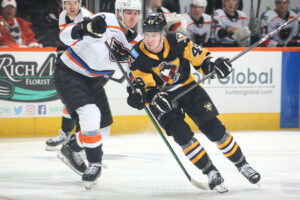 Friday, January 27, 2023 (7:05)
PPL Center, Allentown, PA
Phantoms vs. Wilkes-Barre/Scranton Penguins
Wilkes-Barre/Scranton (19-13-5) is tied for fourth-place with the Phantoms but the Penguins have a game-in-hand entering the week. Former Phantom Dustin Tokarski is back from Pittsburgh and rates third in the AHL with a 2.21 goals-against average and is also third in save percentage at .926. He picked up his milestone 200th career AHL win on November 25 against the Phantoms. The Phantoms are 2-2-1 against the Pens entering Game 6 out of 12 in the season rivalry series with both of Lehigh Valley’s wins coming in northeast Pennsylvania. Valtteri Puustinen (14-16-30) has scored three of his team-leading 14 goals against Lehigh Valley. Former Buffalo first-rounder Alex Nylander (16-16-32) is tops on the team. The Penguins have the second-best defense in the conference (behind Hershey) allowing just 2.7 goals per contest but that didn’t bother the Phantoms last Friday when they exploded for a season-best four goals in a period in the middle stanza at Wilkes-Barre. Four fights in the third period of that game showcased the bad blood the two rivals have developed this year.

Saturday, January 28, 2023 (7:05)
PPL Center, Allentown, PA
Phantoms vs. Hershey Bears
The Bears are back for another rivalry showdown at PPL Center. The Phantoms are looking to get it going against the top team in the conference. Saturday will mark Game 7 out of 14 in the season series. Former Phantoms Mike Vecchione (13-18-31) has been especially strong against the Phantoms this year (3-3-6 in five games) as has first-rounder Hendrix Lapierre (10-12-22) with three goals against Lehigh Valley including his first as a pro on October 16. Joe Snively has provided some additional scoring punch putting together a three-game goal streak shortly after his arrival from the Washington Capitals. First-year Head coach Todd Nelson won a Calder Cup with Grand Rapids in 2017.