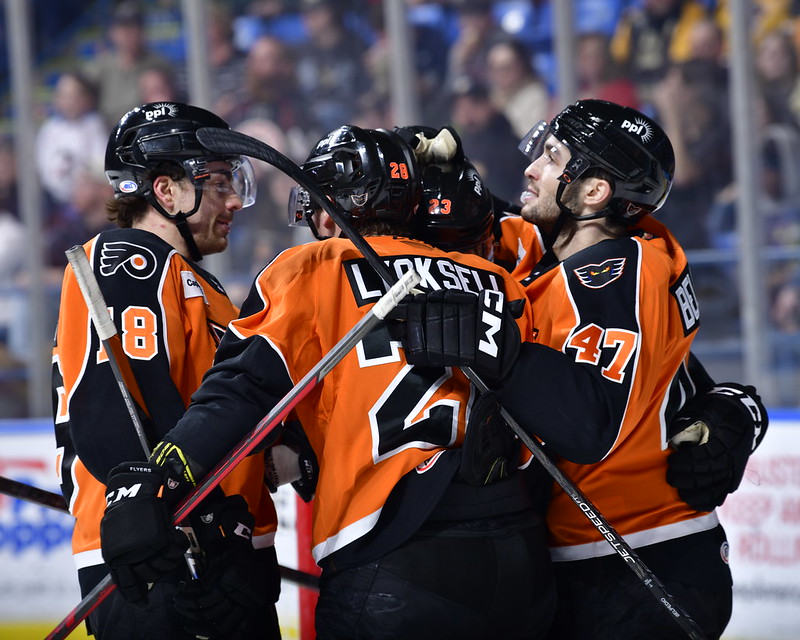 Wilkes-Barre, PA – Cal O’Reilly made American Hockey League history with his 700th career AHL point, Tyson Foerster (12th, 13th) scored twice, and the Lehigh Valley Phantoms put forth a second period for the ages to beat the Wilkes-Barre/Scranton Penguins by a 5-2 count on Friday night. With their impressive victory, the Phantoms rise to a high-water mark five games above .500, and leapfrog the Pens and Charlotte Checkers to third place in the Atlantic Division standings.

In addition to Foerster’s two-goal performance, Jackson Cates and Max Willman both recorded two assists to help Lehigh Valley (19-14-5) to its third consecutive victory as the Phantoms racked up a season-high four goals in a period as part of a powerful middle frame. The Phantoms have points in seven of eight games (5-1-2) in January and have gone 5-0-1 on their pair of three-game road trips since the New Year.

Wilkes-Barre/Scranton (18-13-5) drew first blood against Lehigh Valley, but Samuel Ersson and the Phantoms’ special teams were fantastic to limit the early damage. In a free-flowing period from the start, Ersson made his first of 15 saves in the opening frame only 30 seconds in. A breakaway save on Drake Caggiula in the opening shift helped keep the Baby Pens at bay until midway through the stanza.

At the 9:58 mark, Wilkes-Barre/Scranton tallied on Lukas Svejkovsky’s second goal of the campaign. Transitioning into the Phantoms’ zone, Tyler Sikura connected with Svejkovsky driving towards the crease. After chipping his first chance on net, Svejkovsky followed his own rebound and buried the loose puck initially denied by Ersson’s leg pad.

Lehigh Valley’s penalty kill had a tough task later in the first period, needing to kill a 5-on-3 Penguins power play for nearly two minutes. But Ersson was tremendous in net and active sticks by Egor Zamula, Cal O’Reilly and Louie Belpedio clogged the Penguins’ passing lanes during the 1:55 two-man disadvantage.

After surviving the first period, the Phantoms put forth perhaps their best period of the season from start to finish. Only 1:52 into the new frame, Wyatte Wylie (2nd) blasted home his second goal of the season on a one-timer from the point past Pens’ netminder Filip Lindberg. Captain, and future American Hockey League Hall of Famer, Cal O’Reilly, earned the primary assist for his coveted 700th career AHL point becoming the 25th in league history to reach the impressive milestone.

But the Lehigh Valley Phantoms were far from finished and ultimately posted three more in the frame. Tyson Foerster crashed the net with a strong power move and squeezed a backhand chance through the pads of Lindberg at 4:21 from Jackson Cates and Max Willman. Poised for more, Foerster registered a second time in the period at 16:01 from Elliot Desnoyers and Garrett Wilson. Moments after ringing the iron from the left clot, Foerster made no mistake on a second chance from the right faceoff circle and buried an NHL-caliber rockey into the net.

Only 71 seconds after Foerster doubled Lehigh Valley’s lead, Bobby Brink joined the scoring party to open his club’s lead to 4-1. Brink streaked for the net to receive a perfect centering feed from Olle Lycksell in the corner at 17:12 into the frame. In an absolutely dominating second-period performance, which saw the Phantoms take a 4-1 lead into the dressing room after 40 minutes, Lehigh Valley outshot their in-state rivals by a 19-5 margin in the stanza.

A spirited third period saw four fights between the bitter rivals, and both teams combined for 92 penalty minutes by the game’s conclusion. Nathan Legare brought the Pens within 4-2 at 3:39 after the puck banked off his skate blade and past Samuel Ersson. Upon video review, it was determined there was no distinct kicking motion on the play, thus the goal stood. But once again, Lehigh Valley would punch back and receive the final laugh. Jordy Bellerive capitalized at 5:56 against his former club from Jackson Cates and Max Willman to round out the 5-2 final. Lehigh Valley converted an offensive zone rush to perfection with Bellerive blasting an open look from between the circles after being fed by Cates from the wing.

Bobby Brink opened the fisticuffs with his first AHL fight and a few seconds later it was Hayden Hodgson squaring off with Jamie Devane in a spirited heavyweight tilt. Garrett Wilson and Adam Brooks also found dancing partners in the feisty affair in which both teams displayed their mutual distaste for each other in Game 5 out of 12 of the season series. The Phantoms and Penguins will rematch Friday, January 27 at PPL Center. Lehigh Valley improved to 2-2-1 against the Penguins including 2-1-0 at Wilkes-Barre.

The Lehigh Valley Phantoms return home on Wednesday, January 25 against the Hershey Bears in the opener of a season-long five-game homestand. Join us for a Pregame Happy Hour with $2 Miller Lites and Yuenglings available until Puck Drop.