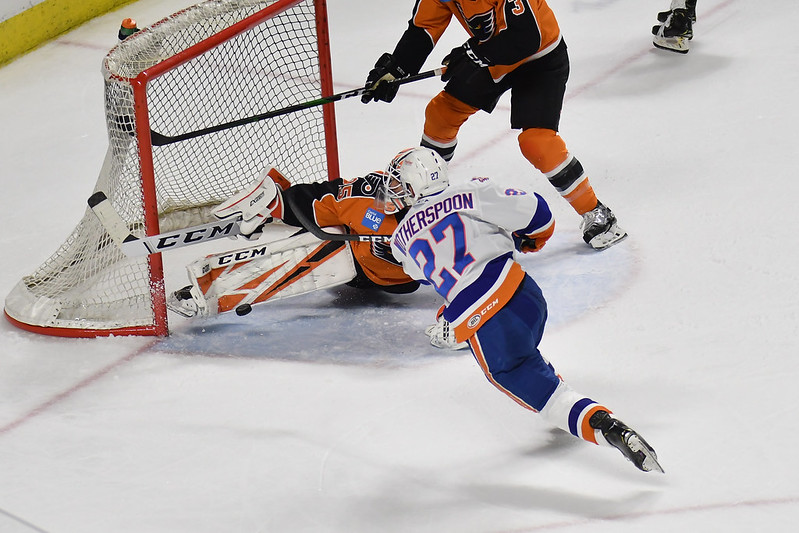 Bridgeport, Conn. – The Lehigh Valley Phantoms equaled a team record with an eight-game point streak coming from behind yet again to post a 3-2 victory at the Bridgeport Sound Tigers on Saturday night. Kyle Criscuolo (1st), Morgan Frost (3rd) and Nicolas Aube-Kubel (3rd) scored for Lehigh Valley while J-F Berube turned in a 26-save performance in his second victory of the season.

After a shot off the post in the third period by Bridgeport’s Kiefer Bellows, it appeared a tie game was a virtual lock with Sound Tigers defenseman Parker Wotherspoon on the backdoor looking at an almost entirely open net. But Berube somehow made it across in time for a scintillating save off the right-pad to preserve the lead with 5:20 remaining. Parker Wotherspoon of Bridgeport is the younger brother of Lehigh Valley’s Tyler Wotherspoon who had set up the winning goal on his shot-pass that was deflected in by Aube-Kubel. 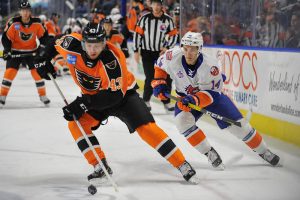 Kyle Criscuolo was tripped on a breakaway in the first period and converted on the subsequent penalty shot for a 1-0 lead. It was the seventh penalty-shot goal in Lehigh Valley history.

A pair of second-period strikes for the Sound Tigers’ Matt Lorito (4th) and Simon Holmstrom (1st) pushed Bridgeport into the lead. Holmstrom’s power-play conversion halfway through the game was the first in the pro career of the promising 18-year-old Islanders first-rounder.

Lehigh Valley rallied with a tying goal on an impressive backhand deflection by Morgan Frost late in the second period on a smart-entry from center point by Mark Friedman.

The Phantoms regained the lead on Nicolas Aube-Kubel’s redirection goal midway through the third on a quick feed from the left boards by Tyler Wotherspoon. Including Greg Carey’s tying goal on Friday with 2:01 left, the Phantoms have produced three impressively sharp deflection and redirection goals in the past two nights.

That set the stage for the night’s defining moment on Berube’s bit of thievery on the younger Wotherspoon brother. The game marked the first time that Tyler and Parker Wotherspoon had ever met in a professional game. 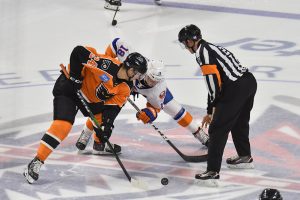 Colin McDonald faced his former team, and teammates, for the first time. The 35-year-old winger was the captain for Lehigh Valley for the past four years but this season signed to play with Bridgeport.

Lehigh Valley and Bridgeport rematch on Sunday at 5:00 p.m. in Connecticut. The Phantoms return to PPL Center with a pair of engagements on Wednesday, November 6 against the Wilkes-Barre/Scranton Penguins and Saturday, November 9 against the Hershey Bears.

Next Time Out: The Phantoms wrap up their weekend series at Bridgeport on Sunday at 5:00 p.m. They’ll return home Wednesday evening for another matchup against the Wilkes-Barre/Scranton Penguins as we will honor our nations’ heroes on Military Appreciation Night.