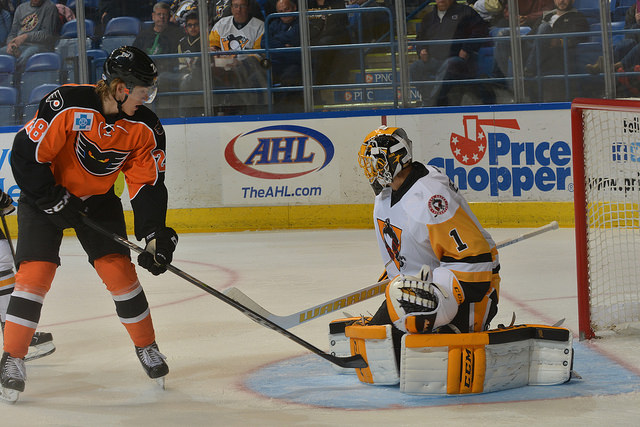 Wilkes-Barre,PA – The top two teams in the American Hockey League from a season ago picked up their long-running rivalry series with Game #155 all-time between the Phantoms and Penguins. The opener of the season set in northeast Pennsylvania went to the host Wilkes-Barre/Scranton squad by a 5-0 score thanks to a 33-save performance from netminder Casey DeSmith. The result represented the first regulation loss of the season for the Phantoms whose record moved to 1-1-1. Safe to say the Lehigh Valley Phantoms will be sufficiently motivated for their rematch encounter against the same Wilkes-Barre/Scranton Penguins on Saturday night back at PPL Center in Allentown.

The strange game on Friday the 13th saw the Phantoms pick up solid pressure in the Penguins zone only to see the puck eventually come back the other way and find the back of the net. Lehigh Valley out shot the Penguins 33-24 in the game including 25-15 in the first two periods but somehow weren’t able to break DeSmith who had the correct response for every quality Lehigh Valley drive. 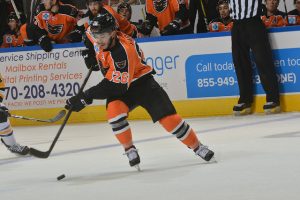 The sport of hockey can be a somewhat bizarre and fickle endeavor sometimes. The Phantoms made it look almost easy in notching seven goals during their opening night rout of the Hershey Bears one week ago. But against Wilkes-Barre/Scranton some of the same shots and opportunities would all be repelled adding up to blank sheet for the top offense in the AHL last year that scored 260 total goals and returned most of their key offensive elements for this season.

Alex Lyon started for the Phantoms and surrendered four goals before he made way for newcomer Dustin Tokarski who made his Lehigh Valley debut appearance late in the second period eventually allowing one late power-play goal. The game also featured the season debut of big defenseman Samuel Morin who was sent to the Phantoms by Philadelphia earlier in the week.

Lehigh Valley had seven power plays on the night and generated some solid efforts against the league’s top penalty kill squad from the previous campaign. Wilkes-Barre/Scranton scored two of their five goals while on the man-advantage. 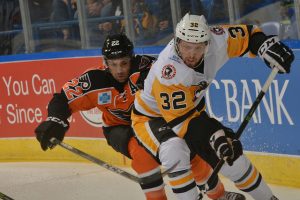 The opening of the game looked very much as though it actually would be the Phantoms night. Lehigh Valley barely let the Penguins escape from their zone for the first six minutes. The Phantoms held a 5-0 shots advantage entering the first promotional timeout and had Wilkes-Barre/Scranton scrambling and struggling for much of the beginning stretch.

But right out of the first timeout came a quick opportunity for the Penguins after the Penguins were credited with a successful icing-race. Thomas Di Pauli’s wide wrap-around connected with Sestito on the backdoor who buried his drive from the left dot before the blocker of Lyon could connect. Phantoms head coach Scott Gordon felt that was a key turning point in the game.

“It was a clear icing. It ends up in the back of our net. It’s a no-brainer call. Our defenseman is ahead of their guy by the hash-mark. That was a game-changing moment,” Gordon said. “Not that you can’t recover from it but when you’re all over a team like that, for them to be able to get a goal like that that’s just way too easy for it to happen for the wrong reasons.”

Three minutes later came a power-play chance and the talented, young prospect Daniel Sprong launched a one-time slap-shot snipe from the top of the left circle for a 2-0 advantage before the midway mark of the opening frame.

The Penguins went on the power play again a couple minutes later but a quick interception at the Phantoms line by Nicolas Aube-Kubel eventually sent Danick Martel flying into the zone on a shorthanded breakaway. Martel was chopped by Zach Aston-Reece but still blasted a quality shot towards the right post that was kicked away by the right pad of DeSmith. Martel was denied a penalty shot after his good scoring opportunity that almost cut into the Penguins lead but Lehigh Valley was awarded a power play out of the incident. Martel entered the game tied for the AHL lead in goals with four. 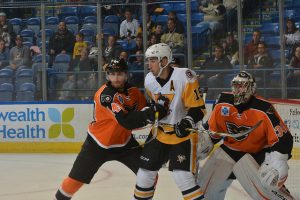 The second period opened with more chances for the Phantoms as the visitors extended their shots advantage. Lehigh Valley had a couple of power plays in there as well but couldn’t bury their opportunities on their way to going 0-for-7 on the night. The Phantoms had one of the top power plays in the AHL a season ago at 20.7% and Scott Gordon knows that it will come for his guys even if this wasn’t the night.

“I would like us to move the puck a little bit quicker.,” Gordon said. “I would like us to do a little more up top when we have the opportunity when it’s crowded down by the net. And we should be sharp on our breakouts. And along the way you’ve got to win some battles.”

After the Penguins withstood the latest Phantoms charge, eventually Frank Corrado’s shot from the right boards would elude Alex Lyon to the blocker side. The shot somehow wiggled through for an unlucky break and a 3-0 lead for Wilkes-Barre/Scranton.

The Phantoms had more continued pressure in the zone later in the second period and were buzzing and seemingly had the Penguins ready to break. But finally the Penguins recovered and found the puck after a number of blocks by the defense and DeSmith. Newcomer Adam Johnson sent the puck to the left corner for grey-beard captain Tom Kostopoulos who quickly wheeled and somehow connected with Jean-Sebastian Dea on the back-door to slam home the team’s fourth lamplighter of the evening.

That was it for Lyon who was replaced by the recently acquired Tokarski. But the Phantoms weren’t done pressuring at Casey DeSmith. On a third-period opportunity, Lehigh Valley worked the puck around smoothly to Greg Carey at the top of the left circle after a nifty behind-the-back drop by Phil Varone ahead of him in the right slot who may have a faked a shot to start. Carey unloaded one of his monster blasts but DeSmith snared the big drive in the glove hand and hung on.

A few minutes later, Danick Martel would race away for a chance of his own but his shot was similarly secured in the trapper of DeSmith.

The Penguins finally touched the new Phantoms netminder, Tokarski, late in the game while Chris Conner sat out for a high-sticking double-minor. Dominik Simon smartly tipped a Zack Trotman slapper to the far post past the glove of Tokarski to cap the scoring and provide the 5-0 final.