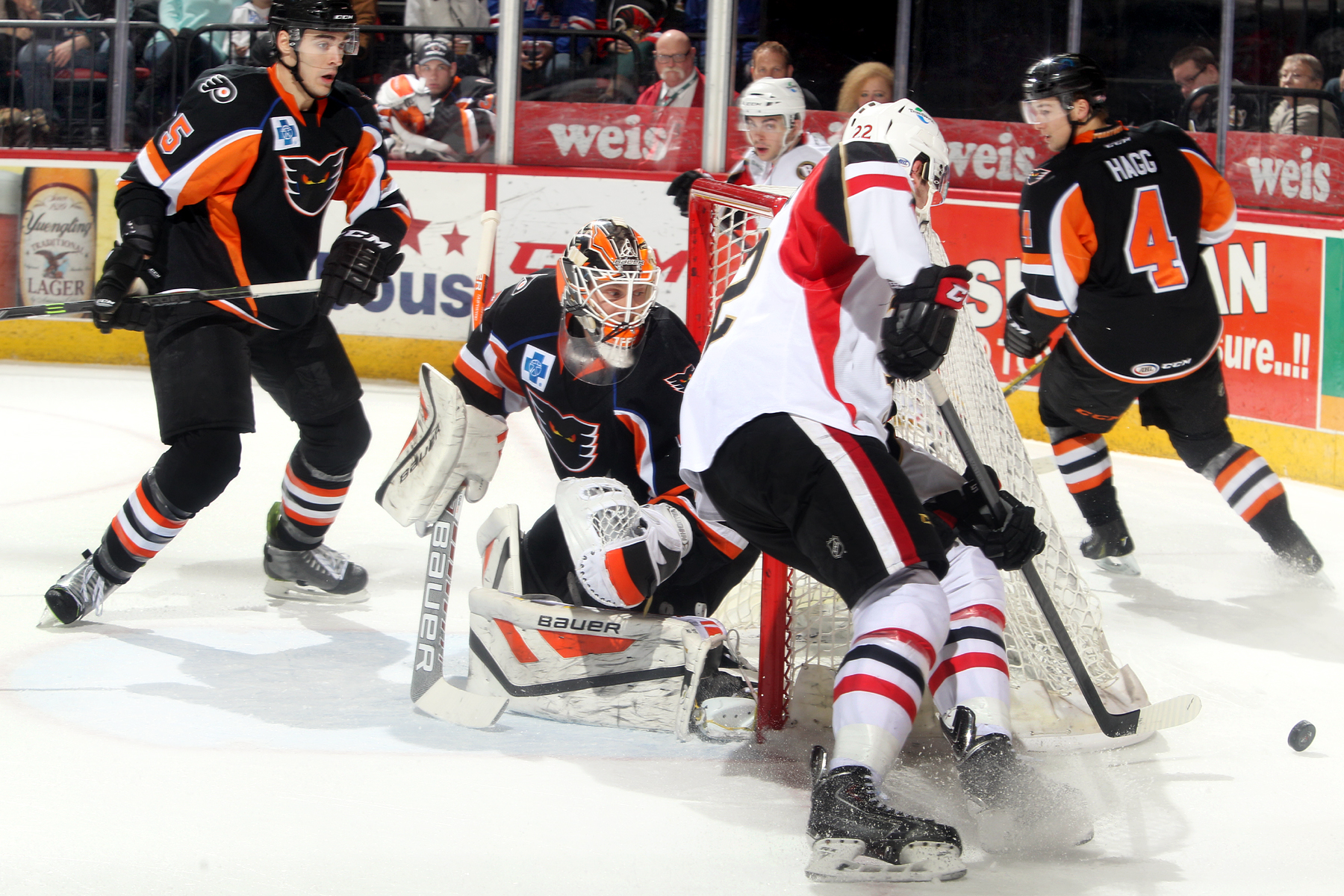 Binghamton, NY – Zack Stortini struck early with a goal and then struck multiple times late with a fight against Mike Sdao but in-between the Binghamton Senators were able to sneak three goals past Rob Zepp for a 3-1 come-from-behind decision on Friday night in upstate New York.

The fast-paced Binghamton Senators offense was held in check for almost the whole first-half of the game as Lehigh Valley preserved their 1-0 lead thanks to 22 straight saves out of the gate for Zepp. But the B-Sens relentless and high-octane attack which produced 40 shots in total would eventually be paid dividends in the form of two goals in the second period scored about three minutes apart to take control of the game. 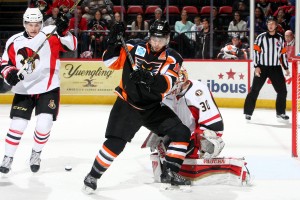 The Phantoms record moves to 10-10-3 with the result in the opener of their third “3-in-3” weekend of the season which will see Lehigh Valley play three games in three different cities in three consecutive days.

The game also featured a fair amount of big hitting within the contest as well as shoves after the whistle with the two East Division rivals expressing their distaste for one another in what was round 2 out of 10 total games to be played in the season series. Put a “to be continued” on some of those situations with Binghamton arriving to PPL Center for their first-ever Allentown visit on Wednesday night.

Steven Delisle dropped the gloves with big Binghamton defenseman Mike Sdao in the second period and then it was Zack Stortini’s turn for a go with Sdao in the third period.

Zack Stortini had started the scoring less than two minutes into the game nicely elevating a backhander while falling away in the left circle. He lifted the shot over the right shoulder of Binghamton netminder Andrew Hammond for the opening tally. Goalie Rob Zepp received credit for his first assist of the season pushing the puck off his blocker save to Taylor Leier who did the rest of the work rushing up the ice. Leier’s shot from the right circle was off to the short-side but deflected off the side of the netting and then off the end-boards back out to Stortini to deposit his second of the season.

Rob Zepp stood tall in his end with 22 consecutive denials of the highest scoring team in the league including several breakaway stops. But Binghamton eventually equalized at 8:23 into the second period on yet another rush into the zone with recent veteran acquisition Brad Mills cranking a high-slot drive off the left-post and in. The shot may have deflected off the stick of Phantoms defenseman Mark Alt attempting to block. 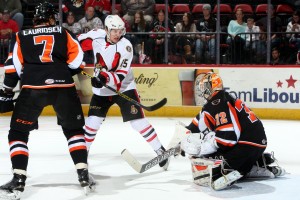 Just three minutes later, another perfect shot would find the back of the net with defenseman Fredrik Claesson lining up a one-timer from the right point to the far-post, high-blocker on Zepp for his second of the season. Jesper Pettersson in the slot was attempting to block but also may have inadvertently served as a screen to his goalie on the play.

Binghamton closed the scoring midway through the third with a critical breathing-room goal from Shane Prince on a power-play scramble. His 10th of the year came from the base of the right circle after a couple of shots and continued attack by Binghamton.

Jason Akeson almost got one of the them back with about five minutes to go with a pretty toe-drag move from the right circle over to the slot but his shot to the blocker side of Hammond glanced off the left post and away. Later in the third period, Mark Alt neatly stick-handled his way to the right-wing corner while the Phantoms were shorthanded and his centering pass was right on the money for a crashing Jay Rosehill but the chip attempt was kicked aside off Hammond’s right leg.

Binghamton out shot the Phantoms 40-35 in the fast-paced affair. The Senators were 1-for-3 on the power play while Lehigh Valley finished 0-for-2. The Phantoms are now 1-1 against Binghamton this season.

Lehigh Valley continues their three-in-three weekend with a Saturday night showdown at PPL Center against the East Division leading Wilkes-Barre/Scranton Penguins followed by a Sunday matinee in Atlantic City against the Albany Devils.

Saturday’s contest features a “Go Birds” Tailgate with special guests Jeremiah Trotter, Brian Baldinger and the Eagles cheerleaders. The Phantoms will also don specialty jerseys that evening which will be auctioned off following the conclusion of the game. Tickets for next Saturday’s match-up are available now at the Mealey’s Furniture Box Office at PPL Center (7th & Hamilton), by calling 610-347-TIXX or online at pplcenter.com.