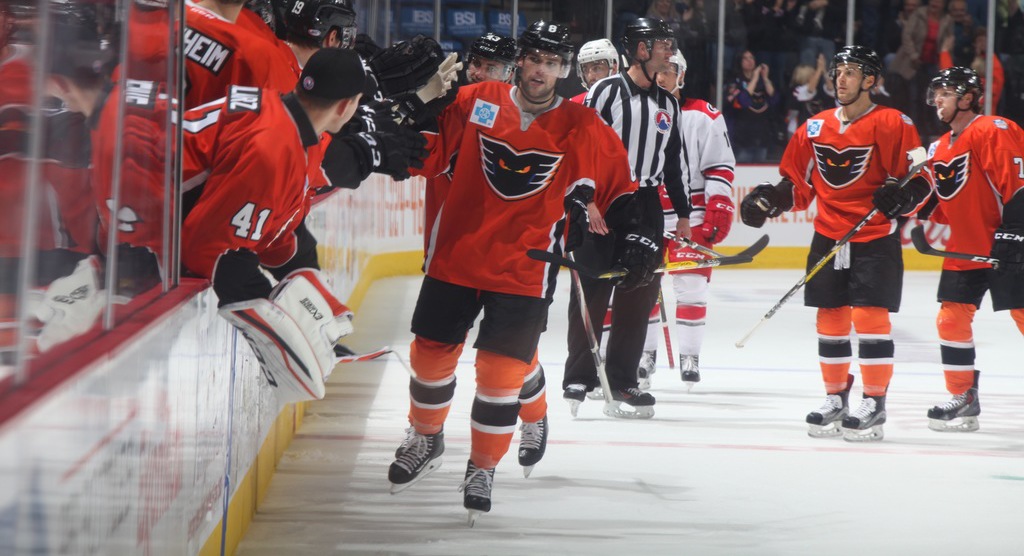 Lehigh Valley, PA – Five different Phantoms found the back of the net Saturday evening and goaltender Alex Lyon registered 26 saves as Lehigh Valley closed its 2016 preseason with a convincing 5-2 win over the Charlotte Checkers in front of 5,831 fans at PPL Center. With the win, the Phantoms split their preseason weekend series with visiting Charlotte, the AHL affiliate of the Carolina Hurricanes. 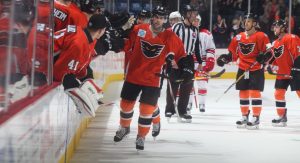 Will O’Neill, Corban Knight, Greg Carey, Chris Conner and Radel Fazleev all scored on Saturday with Carey’s conversion coming as part of a two-point night. Carey wasn’t alone in producing multiple points in Lehigh Valley’s offensive eruption though as Mark Zengerle, Danick Martel and T.J. Brennan also contributed multi-point efforts with a pair of assists each.

The Phantoms offense came in a variety of ways in the club’s final preseason tune up as Knight and Conner converted at even strength while O’Neill and Carey both tallied on the power play before Fazleev capped the evening’s festivities with an empty-net marker. It was all part of an offensive onslaught by the Phantoms that featured 38 shots on goal, including double-digit shots in all three periods. 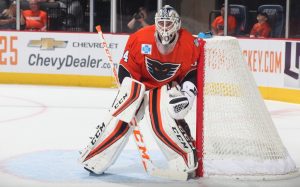 Lehigh Valley’s power play finished the contest an impressive 2-for-5 while the Phantoms penalty kill successfully thwarted all four of Charlotte’s man-advantage opportunities. A big part of the team’s penalty killings efforts was Lyon who, in his first career AHL start, denied 26 shots in the game including several critical denials with the game still in the balance.

The Phantoms can now turn their attention to Opening Night presented by The Morning Call next Saturday, October 15 when the Springfield Thunderbirds, the new AHL affiliate of the Florida Panthers, invade PPL Center to kick off the 2016-2017 regular season. A limited number of tickets remain for Saturday’s regular season opener and can be purchased by clicking here. 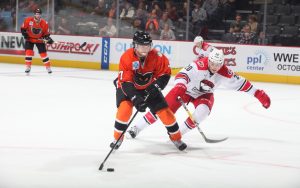 The Phantoms opened the scoring Saturday evening less than five minutes into the contest when, while on the power play, O’Neill launched an absolute rocket from the high slot that sizzled inside the right post and into the back of the Checkers cage. Zengerle and Brennan assisted on the man-advantage marker notched 4:24 into the opening period.

Lehigh Valley then doubled its advantage just prior to the midway point of the contest when outstanding patience by Zengerle paid off as he curled around the backside of the goal forcing Checkers goaltender Daniel Altshuller out of position before setting up Knight at the top of the goal crease who made no mistake in tapping home his first goal of the preseason. The even-strength strike came 8:40 into the second period and produced a multi-point effort for Zengerle who registered 10 such outings with the Grand Rapids Griffins a season ago.

The Checkers cut Lehigh Valley’s lead in half less than four minutes later though when a perfect cross-ice pass by Andrew Poturalski found Erik Karlsson on the left wing who promptly snapped in his first goal of the preseason. Matt Tennyson grabbed the secondary assist on the five-on-five conversion netted 12:36 into the middle stanza.

The Phantoms, however, re-established their two-goal lead less than five minutes into the final frame when a Martel effort at the top of the crease produced a long rebound that was quickly blasted in by Carey. Brennan collected the second assist on Carey’s second goal of the preseason, which came 4:41 into the third period.

Lehigh Valley then swelled its advantage to a three-goal edge just past the midway point of the final period when Conner used his speed to get behind the Charlotte defense before expertly converting a breakaway for his first goal of the preseason. Carey garnered the only assist on the even-strength strike netted 10:46 into the third frame.

The Checkers made their final dent on the score sheet 16:36 into the third period when Clark Bishop converted a breakaway before Fazleev sealed the Phantoms victory with an empty-net tally just 22 seconds later.