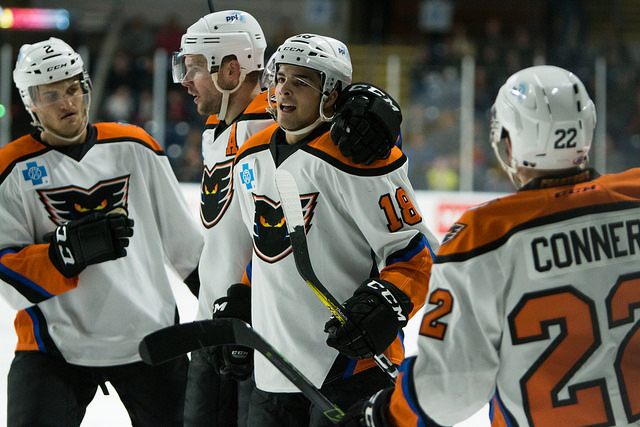 Springfield, MA – The Lehigh Valley Phantoms opened their critical four-game road swing with a 5-4 victory at the Springfield Thunderbirds on Friday night. The Phantoms raced out to a 5-2 lead in the opening minutes of the third on back-to-back goals by Greg Carey (26th) and Colin McDonald(19th) but had to hang on after Springfield strung together back-to-back goals to close the margin back to one. 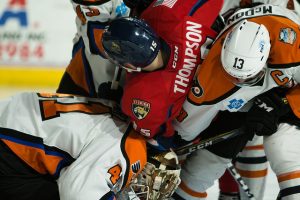 Carey scored his fourth goal in the last five games. And his 26th goal of the season pushes the third-year pro from Hamilton, Ontario into sole possession of the league lead breaking a tie with Wade Megan of the Chicago Wolves. Carey played for the old Springfield Falcons last season and led that team with 26 goals. He has equaled that total with Lehigh Valley and still has 21 games remaining to try to become the first 30-goal scorer for the Phantoms franchise since Jonathon Matsumoto in 2009-10.

Anthony Stolarz recorded a season-high 44 saves on 48 shots for the exciting win. That included a 19-shot barrage in the third while the Phantoms were trying to push their way through shorthanded due to the absence of a couple of injured players.

The Phantoms surged back into second place in the Atlantic Division with a little help from the Albany Devils who defeated the Providence Bruins. Lehigh Valley’s two games-in-hand puts them ahead of the Providence Bruins on points percentage despite an overall two-point deficit. Equally important, the Phantoms gained ground on the idle first-place Wilkes-Barre/Scranton Penguins and now trail for first place by six points while still holding one game-in-hand. The Phantoms and Penguins have seven more head-to-head showdowns in the remaining 21 games of the regular season. 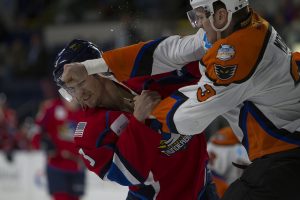 Springfield opened the scoring with new acquisition Reece Scarlett finding the back of the net on his drive from the top of the left circle through a couple of forwards screening the view of Stolarz. The goal in the Thunderbirds debut for Scarlett, who came over from the Albany Devils in a trade a couple days earlier, gave the hosts a 1-0 advantage on their first shot of the game at 1:32.

The Phantoms rallied back with a pair of goals from Danick Martel. Will O’Neill’s center-point drive just as a power play had expired found the stick of Martel in the low slot for a perfect deflection past the left leg of Adam Wilcox to tie the game at 1-1. Mark Zengerle’s saucer pass from the left boards perfectly connected with O’Neill for a secondary assist.

Just over six minutes later, Martel raced away with a 2-on-1. Martel eyesdAndy Miele on the right wing but saw daylight on the short-side of Wilcox and burned him past the blocker for Martel’s second of the night and 16th of the season. Mark Alt and Chris Conner from their own zone sprung him free with just over a minute left in the period for a 2-1 advantage.

A scramble in the slot to begin the second period led to a couple of tackles around Anthony Stolarz eventually sparking the game’s second showing of fisticuffs when Cole Bardreau dropped the gloves with Dryden Hunt in a spirited bout. Late in the first period it had been Corban Knight going up against Matt MacKenzie. 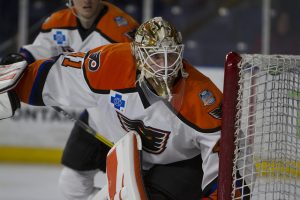 Springfield scored just a few seconds after the Bardreau and Hunt fight to tie the game at 2-2. Graham Black from behind the net found Chase Balisy on the side of the cage who scored his 12th of the season for a 2-2 tie.

The game would remain deadlocked at 2-2 until a fraction of a second remained in the middle period. T.J. Brennan’s shot on the power play was kicked down by Adam Wilcox but Chris Conner was there on the right of the crease to tuck in the rebound with just 0.5 seconds left to put the Phantoms back on top at 3-2. Greg Carey also assisted on the goal.

The Phantoms turned on the pressure to begin the third period and stretched their advantage to three. A drive off the end-boards took a friendly bounce right out to Greg Carey racing up to the right circle. Lehigh Valley could not have drawn up the perfectly advantageous carom any better and Carey smoothly took advantage to blast through his league-leading 26th of the year on the neatly acquired assist for Will O’Neill whose two helpers on the night advanced his season total to 28. 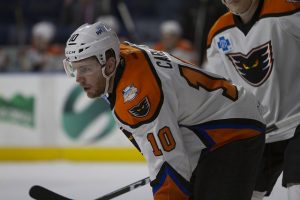 Just over a minute later came another sharp ricochet off the boards for a goal but this time perhaps a bit more planned. Scott Laughton from deep in his own end saw Colin McDonald ahead of the Springfield blueliners. Laughton’s rocket of a line-drive off the end-boards set up McDonald to win the race and beat the icing and the notoriously hard end-boards at MassMutual Center gave a perfect bounce right out in front for the charging captain who buried his 19th of the season.

That was it for starting goalie Adam Wilcox who took the loss in his Thunderbirds debut. ECHL call-up Sam Brittain went the rest of the way for Springfield but only had to face three shots from Lehigh Valley for the remainder of the game while the Thunderbirds skaters kept up the pressure in the Phantoms’ zone.

Sam Morin dropped the gloves with Springfield big man Josh Brown for the third fight of the game and the Thunderbirds were ready to roar back into contention with consecutive goals of their own.

Paul Thompson’s 11th at 6:05 on a drop from behind the net by Chase Balisy began the comeback. And then Jayce Hawryluk on a chip from the left of the cage after a bit of a scramble pulled the hosts back to within a goal. But the Phantoms and Anthony Stolarz would withstand the charge the rest of the way and hang on to preserve the win in the wild affair.

The Phantoms road-trip continues Saturday afternoon with a 3:00 game at the Hartford Wolf Pack and then the Phantoms tangle with the Providence Bruins on a Sunday in another 3:00 showdown. Broadcast coverage of both games this weekend will begin at 2:20 each day on NewsRadio 790-WAEB, the Phantoms 365 app, and Phantoms Radio 24/7 on TuneIn.

The Phantoms return home Friday, March 10 against the Hershey Bears and Saturday, March 11 against the Utica Comets. Saturday’s game features a postgame skate with the players presented by Big Woody’s. Fans must bring their own skates in order to be allowed onto the ice to participate in this terrific fan interaction event. Tickets are available at PPLCenter.com