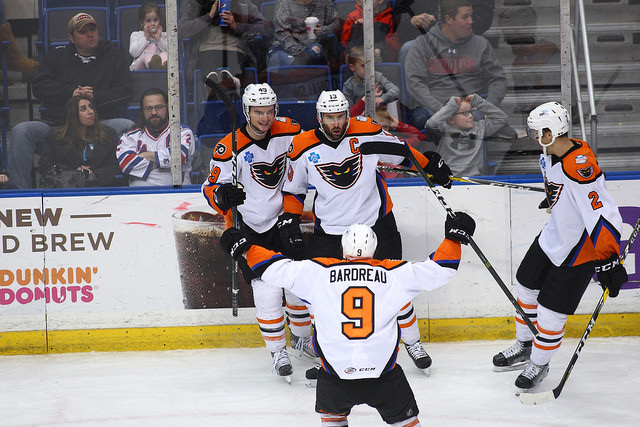 Hartford, CT – Proving that Thomas Wolfe might not have had any idea what he was talking about, Colin McDonald returned to his home area to push the Phantoms onto victory at the Hartford Wolf Pack. The captain of the Phantoms struck for his 20th of the season with just 1:56 remaining for the game-winning goal as part of a 3-1 matinee decision in the second of a four-game road swing.

Alex Lyon was magnificent in a 32-save performance that included several spectacular denials along the way to recording his 22nd victory of his rookie campaign. Three of Lyon’s saves in the second period have to rate among is best of the season. Scott Laughton (13th) scored an empty-netter with 1.9 seconds remaining to seal the victory. Chris Conner struck for his 19th of the year to open the scoring and extend his point streak to six games (4-4-8). 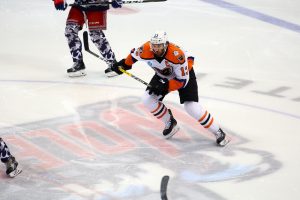 Colin McDonald grew up in nearby Wethersfield, Connecticut. His father, Gerry McDonald, played for the Hartford Whalers of the NHL and the Binghamton Whalers of the AHL and later served as a radio and television broadcaster for the Hartford Whalers and Wolf Pack. McDonald’s top-shelf goal from the bottom of the right ring came as a result of a hard-charging Cole Bardreau who stole the puck in the corner before quickly connecting across the ice with his linemate.

T.J. Brennan recorded an assist on the first goal of the game to push his season point-total to 48 thus providing the veteran defenseman with the team lead. Chris Conner and Jordan Weal are close behind with 47 points each.

The Phantoms were boosted by a strong showing from the Phan Club bus which traveled a sizable and noisy contingent from Allentown while several other fans from the Lehigh Valley region made their way up to New England in support of their team.

The Phantoms improved to 36-17-3 overall to take a more significant hold of second place in the Atlantic Division ahead of the Providence Bruins. Lehigh Valley pulled to within four points of first place Wilkes-Barre/Scranton pending the outcome of the Penguins’ Saturday evening engagement at Hershey. The Phantoms have 20 games remaining in the regular season heading into their Sunday afternoon appearance in Providence, Rhode Island. 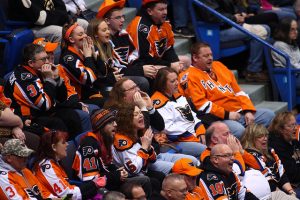 A back and forth first period that ultimately concluded with no goals began with a bang when Hartford’s Adam Tambellini rocketed the opening shot of the game off the iron past the glove of Alex Lyon just 15 seconds in.

A few minutes later, Philip McRae turned the corner around the right-wing and drove straight at and around Lyon’s crease but a right-pad kick stop stood in the way of the speedy Pack winger.

Midway through the first it was the Phantoms who were buzzing while Wolf Pack rookie netminder Brandon Halverson was scrambling to find his stick. Andy Miele received the puck point blank on top of Halverson who somehow kicked away the close-range opportunity.

Lehigh Valley struck at the 6:32 mark of the second period when T.J. Brennan’s long outlet pass connected up the right-wing with Nicolas Aube-Kubel who found a rushing Chris Conner speeding up the slot for a chip in. The fast-break strike gave the Phantoms a 1-0 lead but from there it was very much The Alex Lyon Show.

Perhaps aided by the Phan Club contingent behind him in the second period, Lyon would go on to make three of his most spectacular stops of the season as part of a 15-save effort in the middle frame.

Newly acquired Taylor Beck was robbed with the snappy and speedy glove of Lyon on a Hartford power-play rush into the zone. Later in the second it was practically the left toe of Lyon that kept the Phantoms up by a goal on a tremendous stop against John Gilmour. Lyon induced more roaring from the Phantoms fans behind him with 2:56 remaining in the second period on his tremendous glove thievery of Marek Hrivik’s shot from the left circle.

Hartford finally broke through six minutes into the third period when the younger brother of the league’s leading goal scorer would convert. Matt Carey was initially thwarted by the speedy right kick of Lyon but the rebound came right back to the stick of Greg’s younger brother for the rapid-fire put-back. Matt Carey’s 15th of the season had equaled the game at 1-1 and represented the fifth time in the last six games that one Carey OR the other had scored in a Phantoms game. Greg Carey had goals in four of the last five before the Saturday contest.

Both teams would trade chances for the remainder of the third but would remain deadlocked until Cole Bardreau’s hard effort in the corner resulted in a steal of the puck deep in the attacking zone. Bardreau connected quickly across to the onrushing McDonald who rattled the game-winning conversion around the top of the cage with 1:56 left.

Scott Laughton buried an empty-netter with 1.9 seconds remaining to seal the second consecutive hard-earned victory for the Phantoms on this critical road-trip.

Tyrell Goulbourne rejoined the team for his first game with Lehigh Valley since November 2. Goulbourne almost broke the 1-1 tie about midway through the third on his close-range try, set up by Radel Fazleev but Halverson somehow came up with the pad save.

Shots in the game were even at 33-33. Lehigh Valley went 0-for-4 on the power play representing the first time in six games for the Phantoms to not score a power-play goal. Hartford finished at 0-for-3 extending the Phantoms impressive penalty kill stretch to 13 straight. Lehigh Valley has held their opponents to 1-for-23 in the last five games.

The Phantoms concluded the season series with a 4-3-1 mark against Hartford.

The Phantoms road-trip continues Sunday afternoon with a 3:00 game at the third-place Providence Bruins who are even with the Phantoms in points. Broadcast coverage will begin at 2:20 each day on NewsRadio 790-WAEB, the Phantoms 365 app, and Phantoms Radio 24/7 on TuneIn.

The Phantoms return home Friday, March 10 against the Hershey Bears and Saturday, March 11 against the Utica Comets. Saturday’s game features a postgame skate with the players presented by Big Woody’s. Fans must bring their own skates in order to be allotwed onto the ice to participate in this terrific fan interaction event. Tickets are available at PPLCenter.com