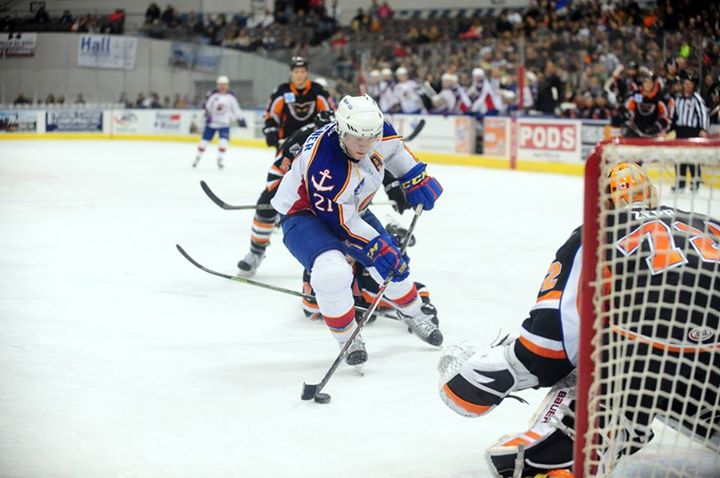 Norfolk, Va. – The Phantoms have been no strangers to overtime and shootouts this year…and the Lehigh Valley crew went extra-time yet again in a 3-2 shootout victory at the Norfolk Admirals on Saturday night to sweep the two-game weekend series.

Jason Akeson scored the only goal in the three-round shootout against the Norfolk Admirals while Zack Stortini (5th) and Petr Straka (8th) converted goals in regulation to push Lehigh Valley to a second consecutive away victory for the first time this season. But the star of the show was goaltender Rob Zepp who won for the second night in a row with a terrific 34-save performance that featured a number of 10-Bell stops.

Zepp’s best of the night preserved a 2-2 tie with 4:14 remaining in the third period when he kicked out the right-leg to deny a big one-timer on the back-door from former NHL All-Star Dany Heatley. A large number of fans at Norfolk Scope Arena had risen to their feet on that one under the impression that Heatley’s drive simply HAD to be a goal. But Zepp almost miraculously pushed across from post-to-post for the spectacular stop.

Zack Stortini’s goal on the power play late in the second period to tie the score at 1-1 came on a scramble in the crease following a big blast from the left point by Blair Jones that handcuffed Admirals goaltender Jason Labarbera.

Petr Straka’s goal came 62 seconds after Karlsson had put Norfolk back in front. His interception from center-point of an errant clearing try resulted in a top-shelf conversion from the high slot.

The Phantoms have defeated Norfolk three times in the past week with all three of the tightly contested battles going to extra-time. Lehigh Valley is 4-0 on the season-series with the Admirals.

The Phantoms went to extra-time for a 12th occasion this year which is the most of any team in the Eastern Conference and second-most in the 30-team American Hockey League trailing only the Oklahoma City Barons who have engaged in 13 late-night battles of their own.

Both teams were 1-for-5 on the power play while the Phantoms outshot the Admirals 42-36. Lehigh Valley improved to 16-12-5 with the weekend-series sweep and moved to within one point of Providence for the 8th place position in the Eastern Conference nearing the midway point of the 2014-15 campaign.

Lehigh Valley returns to action next Saturday at 6:00 p.m. (Eastern Time) at St. John’s and again on Sunday at 2:30 p.m. as the Phantoms tangle with the IceCaps in the final games of their five-game road swing.

The Phantoms return to PPL Center on Friday, January 16 and Saturday , January 17 against the Albany Devils and Binghamton Senators. The January 17 game is Legends Night featuring one of hockey’s all-time greats, Bobby Clarke, making a live appearance at the game. Tickets for both weekend contests are going fast as the team aims for their 8th and 9th PPL Center sellouts of the season. purchase tickets in advance at PPLCenter.com or by calling 610-347-TIXX (8499).