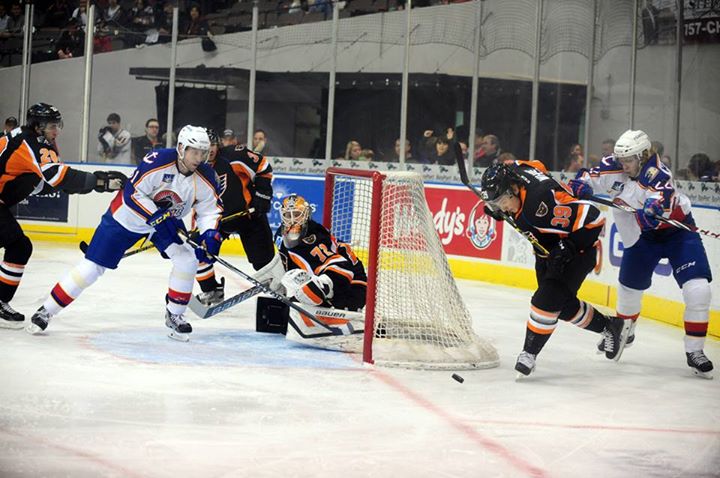 The Phantoms rallied from behind for the win. Trailing 1-0 most of the way, Brandon Alderson finally put Lehigh Valley on the board with a laser from the right-boards to the far-post with 6:59 remaining in the third period to even the score at 1-1. It was Alderson’s first game back with the Phantoms after spending slightly over a month with Reading in the ECHL. The speedy winger appeared to have regained his confidence with the enhanced playing time there as he was flying up the ice and creating chances. His goal came on his fifth shot of the game.

Jason Akeson’s shorthanded breakaway tally with 1:48 left put the Phantoms in front 2-1 and appeared to be the possible game-winner. Akeson has scored in three straight and now has six goals in his last seven games dating back to December 17. In just a little over a month with Lehigh Valley, Akeson has vaulted into a multi-way tie for the team lead in goals with eight along with Cousins, Andrew Gordon and Taylor Leier.

Former NHL All-Star Dany Heatley scored his first-ever AHL goals with the opener at 8:40 into the game and a late equalizer with just 35 seconds remaining on his impressive one-timer in the slot during a desperation 6-on-4 push for the Admirals.

Both Rob Zepp and John Gibson were stellar in their respective nets. Shortly before Cousins’ game-winner Zepp made a spectacular left-leg kick save to deny a quick drive from Heatley who was aiming for a hat-trick in the extra period.

The Phantoms are 6-5 in games decided after regulation this year including 3-4 in overtime and 3-1 in shootouts. The overtime victory was the team’s first since October 25 when Scott Laughton drove-home an extra-period strike at Binghamton in the league’s new 3-on-3 format. Brandon Manning has the other Lehigh Valley overtime goal this season coming on Opening Night, October 17 against the Adirondack Flames.

The Phantoms are 1-1 on their 5-game road-trip and boast a 3-0 record against the Norfolk Admirals this year. It is Lehigh Valley’s second extra-time 3-2 decision over Norfolk in one week; The Phantoms also upended Norfolk at PPL Center last Saturday by the same final score following an 8-round marathon shootout.

Lehigh Valley and Norfolk square off again on Saturday night at 7:15. Broadcast coverage of the game can be heard on NewsRadio 790, WAEB and on 790WAEB.com. This is a switch for one night only from the team’s regular flagship station, Fox 1470-AM.

The Phantoms return to PPL Center on Friday, January 16 and Saturday , January 17 against the Albany Devils and Binghamton Senators. The January 17 game is Legends Night featuring one of hockey’s all-time greats, Bobby Clarke, making a live appearance at the game. Tickets for both weekend contests are going fast as the team aims for their 8th and 9th PPL Center sellouts of the season. purchase tickets in advance at PPLCenter.com or by calling 610-347-TIXX (8499).