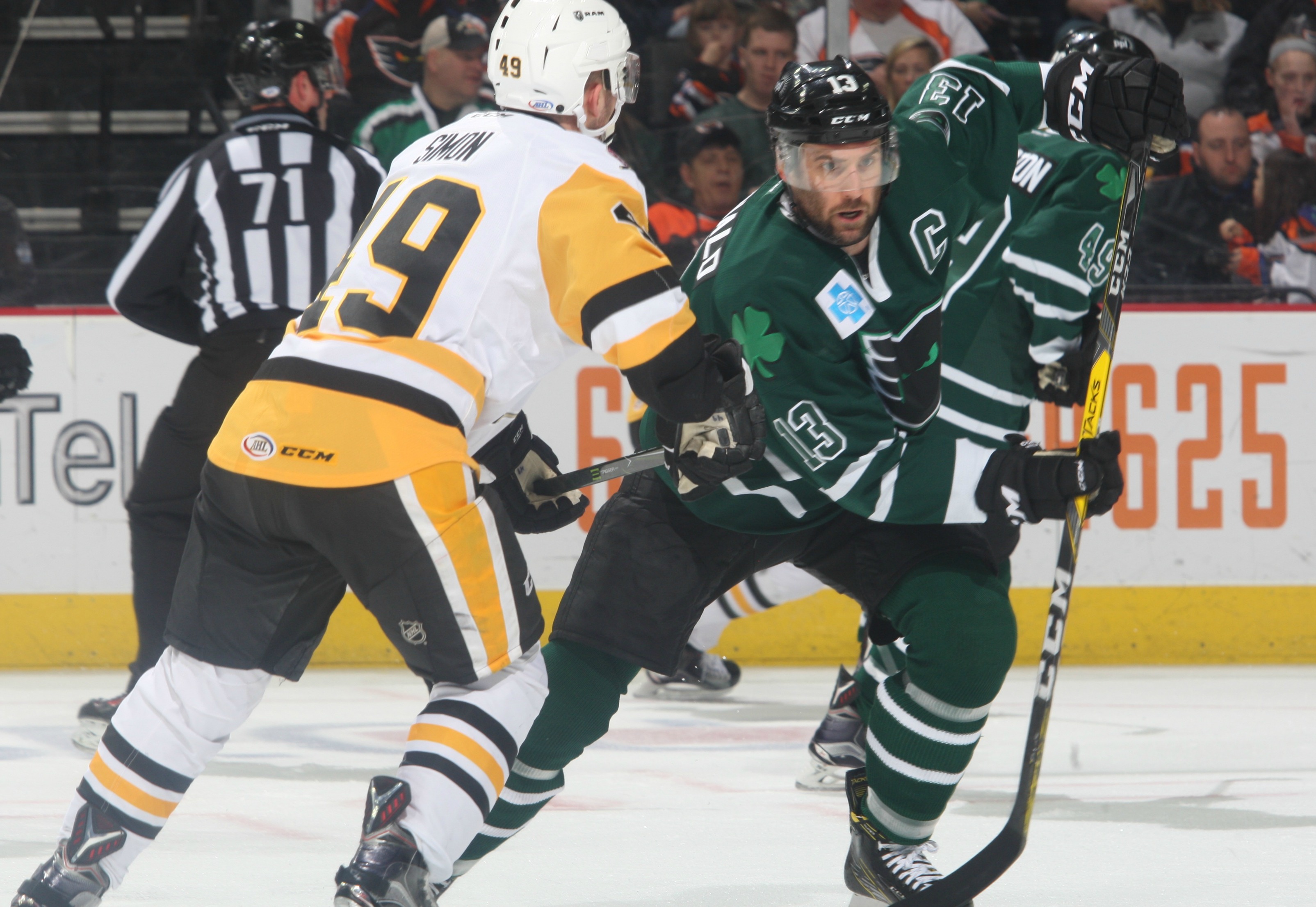 Lehigh Valley, PA – The Lehigh Valley Phantoms almost made it through their successful four-game homestand without a regulation loss but the Luck of the Irish was not quite with the hosts on this St. Patrick’s Day edition of Phantoms hockey. The visiting Wilkes-Barre/Scranton Penguins took a 4-1 decision at PPL Center in the opener of the two teams’ home-and-home weekend rivalry showdown series. The Phantoms finished their home stretch with a 2-1-1 mark and were pinned with a regulation loss for the first time in five games and for just the second time in the last eight games (5-2-1).

Max Lamarche (3rd) blasted home the game’s opening tally on the power play to provide the Phantoms with the early advantage. But after a late first-period surge that culminated with Corban Knight’s rocket off the post the tide would turn in favor of the rival Penguins for their rally from behind. 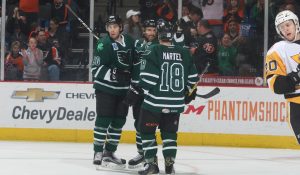 The Phantoms again donned their sharp, dark-green, shamrock-adorning, Celtic Celebration jerseys which were then offered straight off the players’ backs to the fans in a post-game jersey auction. Excited Phantoms Phans relished at the opportunity to win one of the unique and festive, game-worn, St. Patrick’s Day sweaters.

Lehigh Valley is 3-3-1 against the Atlantic Division leaders in the rivalry series and still have five more head-to-head showdowns in their continued efforts for the conference crown. The Phantoms and Penguins will rematch on Saturday night in northeast Pennsylvania. Following the team’s upcoming three-game road-swing, the next home game for the Phantoms will also come in another pivotal engagement with the rival Penguins on Saturday, March 25 at PPL Center.

The Lehigh Valley Phantoms at 39-19-4 maintain their hold on second place in the Atlantic Division and Eastern Conference and now stand five points back of first-place Wilkes-Barre/Scranton with 14 games remaining in the last month of the regular season in the exciting race for the division title that could very well go down to the wire. 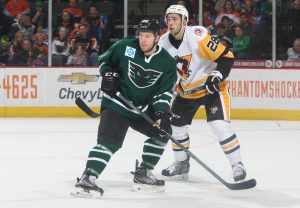 The Phantoms jumped out to a hot start and eventually blasted through a power-play goal against goaltender Tristan Jarry on a one-timer from the left circle by defenseman Max Lamarche teeing up his right-handed drive on a set up by Mark Zengerle and Travis Sanheim who assisted on the play. The goal was the Phantoms fourth on the power-play in their last 10 opportunities over the most recent three games and was also the 68th strike for the typically lethal man-advantage attack rating second-most in the American Hockey League and tops in the Eastern Conference.

The latter minutes of the opening frame were dominated by the Phantoms who were buzzing in the Wilkes-Barre/Scranton zone. Several big chances were thwarted by blocks or Jarry saves. With the Penguins on the ropes, Corban Knight’s drive from the left circle beat Jarry to the far side but rang off the far post and bounced straight out. The visitors were unquestionably saved by the horn at the end of the first somehow holding Lehigh Valley’s advantage to only one goal despite the continuous onslaught of the Phantoms skaters.

The tables turned in the second period and the Penguins had their chance to surge back. A Lehigh Valley power play came back at them at the wrong time when Alex Lyon’s efforts in the corner with T.J. Brennan wound up being intercepted by an aggressive Teddy Blueger. He found Josh Archibald in the opposite circle whose big blast was perfectly picked into the upper short-side corner over the right shoulder of Lyon for the equalizing score at 8:34 into the second.

The Penguins had the Phantoms pinned later in the period and eventually converted on a drive from the right point by defenseman Frank Corrado that missed on the short-side but perfectly caromed off the end-boards to an almost fortuitously-positioned Ryan Haggerty on the left of the cage for the nifty sharp-angle conversion. The goal at 14:12 of the middle frame put the Penguins ahead at 2-1. 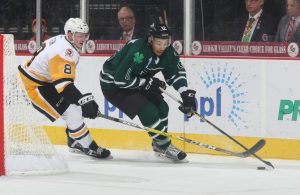 Lehigh Valley stepped up their play in the third period and had several quality opportunities at Tristan Jarry for a dramatic equalizer. But an offensive zone face-off win by veteran Kevin Porter connected directly to 38-year-old Tom Kostopoulos whose rapid-fire snipe top shelf on the glove-side of Lyon pushed the Penguins lead to 3-1 in a late turning point of the night.

The Phantoms received a power-play opportunity with 4:10 remaining in regulation and eventually pulled goaltender Alex Lyon for a 6-on-4 attack while attempting to overcome the two-goal deficit. But this time the top penalty-kill in the league would prevail against one of the best power plays and Lehigh Valley was unable to cash-in on the late opportunity. With time winding down, the Wilkes-Barre/Scranton Penguins eventually raced away with a neutral-zone faceoff win for an empty-net tap-in by Dominik Simon to complete the victory.

The Phantoms finished at 1-for-3 on the power play while Wilkes-Barre/Scranton was 0-for-1. The Penguins out shot the Phantoms 32-30. Round 8 of the 12-game season rivalry series is Saturday night at Mohegan Sun Arena at Casey Plaza in Wilkes-Barre Township, Pa.

The Phantoms return to PPL Center on Saturday, March 25 against the Wilkes-Barre/Scranton Penguins on meLVin Garden Gnome Night presented by Capital Blue Cross and Service Electric. Then on Sunday, March 26 at 5:05 p.m. the Phantoms host the Bridgeport Sound Tigers on Silver Phantoms Night featuring special discount packages exclusively for fans 60 and older including a game ticket, food voucher, Phantoms silver blanket, Phantoms grocery tote-bag and more.
Tickets for upcoming games can be purchased at PPLCenter.com