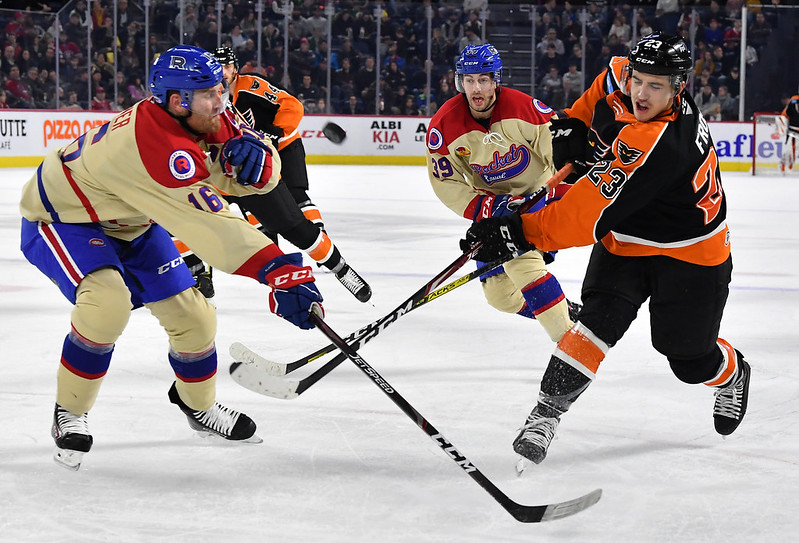 Laval, Quebec. – The Lehigh Valley Phantoms opened the New Year on the road at Laval, Quebec and fell in a 4-0 decision to the Laval Rocket on Friday night at Place Bell. The Phantoms lineup was boosted by the returns of centers Morgan Frost (from Philadelphia) and Cal O’Reilly (from injury) but Lehigh Valley had a tough time breaking through on Voorhees, NJ native Cayden Primeau who recorded a 20-save shutout.

The son of former Philadelphia Flyer Keith Primeau notched his second blank sheet of the season. He was challenged the most in the third period as the Phantoms offense found its chemistry and pushed through with several quality chances. Connor Bunnaman generated scoring tries in each period including a couple close calls right on top of Primeau on a first period power play as well as other attempts at the net front for the second-year center. 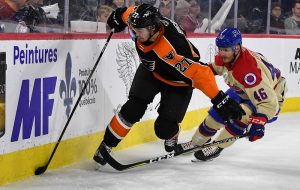 Frost was playing his first game for the Phantoms since his November 19th NHL debut with the Flyers that resulted in is first career goal at the Florida Panthers. He had been officially announced just a few hours earlier as the Phantoms representative at the AHL All-Star Classic to take place in Ontario, California in a few weeks. Veteran center Cal O’Reilly had been out for almost a month with injury but was available to return and solidify things down the middle in his 883rd career pro game for the AHL’s active career assist leader with 474.

Frost’s game improved and his confidence increased as the night progressed and in the third period he offered a backhand spinorama to elude a defender and move up the right boards. He spotted an open Isaac Ratcliffe in the middle for one of the best scoring chances of the night. Ratclfife offered two or three jabs at Primeau trying to work the puck free but the Rocket goalie tumbling onto his right hip was able to block out the dangerous chance.

The game took a decidedly chippy and feisty tone that elevated in the third period with several scrums and shoves and punches with tempers escalating. Lehigh Valley and Laval can continue their respective tensions next Saturday night at PPL Center in the Phantoms’ first home game of 2020.

J-F Berube absorbed the decision for Lehigh Valley (12-17-5) while repelling 29 of 33 Rocket tries along the way.

Josh Evans opened the scoring just 4:25 into the game on a rush up the right by Gustav Olofsson who centered to Evans on the backdoor to slam home the first tally.

Charles Hudon blasted his team-leading 16th of the year from the right ring on a power play one-timer for a 2-0 advantage just 1:10 before the break. 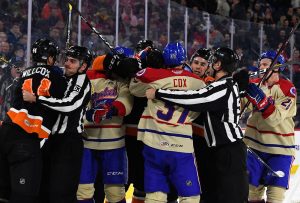 Evan McEneny rushed in from the right point to receive a back-door feed from former Hershey Bear Riley Barber who dangled around a defender to create the opportunity at 12:23 into the second period.

And Ouellet began the third period with his conversion from the right point through traffic just 11 seconds into the final frame that closed the scoring.

The Phantoms road-trip continues Saturday night at the Belleville Senators and then Sunday at 4:00 p.m. at the Toronto Marlies. The Lehigh Valley Phantoms return home on Saturday, January 11 in a rematch against the Rocket and Sunday, January 12 at 3:05 p.m. against the Cleveland Monsters on Star Wars Day. The Phantoms are ringing in the 2020 New Year with $20 tickets for their first two home games.