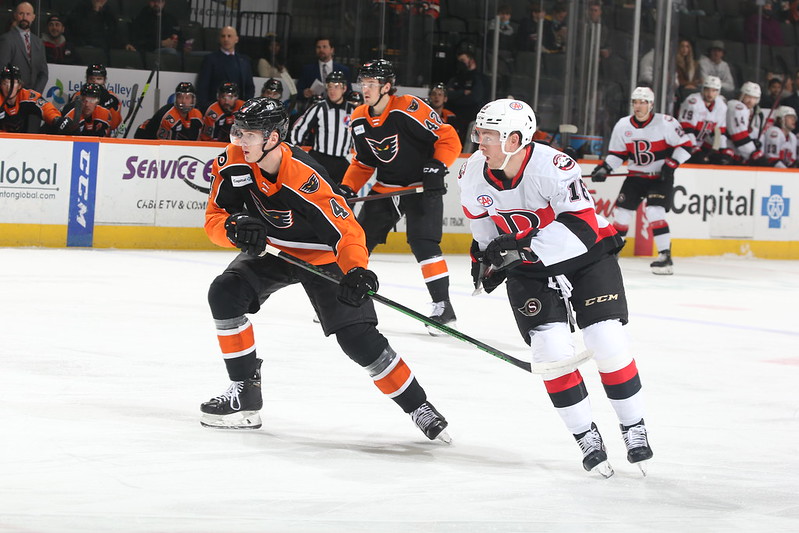 Hershey Up Next on Friday

Lehigh Valley, PA – The Lehigh Valley Phantoms were unable to break through against Belleville goalie Filip Gustavsson in taking their first shutout of the season in a 5-0 loss to the Belleville Senators on Tuesday night at PPL Center. Gustavsson’s 21 saves led the Belleville victory while former Philadelphia Flyer Michael Del Zotto paced the offense with a goal and two assists.

Sam Ersson started for the first time since an injury recurrence on December 18 but again was unable to finish the game as he made way for Felix Sandstrom in the third period.

Zac Leslie (2), Andrew Agozzino (11), Max Guenette (3), Roby Jarventie (6) and Michael Del Zotto (6) scored for the B-Sens who struck for a pair of goals in the second period and then put the game away with three more in the third. Three of Belleville’s goals were scored by defensemen. 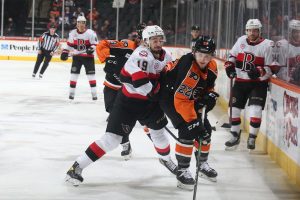 The game was only the second regulation loss at home in the last 10 for Lehigh Valley (15-17-8). The Phantoms were shutout at home for the first time in over two years since December 29, 2019 when Parker Milner of Hershey had 19 saves in a 3-0 win for the Bears.

The Phantoms got off to a good start in the homestand opener with five shots at Gustavsson to Belleville’s none. But after the Senators weathered the early surge it was their turn to push and Ersson made a number of fine stops to keep the game even.

Lehigh Valley found themselves killing a 5-on-3 to open the second period but made its way through that challenge fairly routinely to regain some energy.

But the Senators would charge back and Leslie at 8:40 into the second and Agozzino at 11:39 into the second both found rebounds off of Del Zotto shots that handcuffed Ersson to give the Senators a 2-0 lead. Belleville almost made it 3-0 but Ersson was there for some pivotal denials including a shorthanded breakaway effort for Rourke Chartier.

The Sens distanced themselves early in the third with a point-shot from Guenette at 3:27 into the third period followed by a Jarventie conversion just 1:34 later that made it 4-0.

After Sandstrom replaced Ersson, it was Del Zotto scoring from the blue line with a power-play shot with 7:55 remaining to conclude the scoring.

Lehigh Valley had a pair of power plays at the end of the third but were unable to break the shutout bid despite some zippy passing by young talents Morgan Frost, Cam York and Egor Zamula setting up some quality tries.

The Phantoms are beginning a six-game homestand which is their longest of the season.

The Phantoms return to PPL Center for three straight games beginning Friday night against the Hershey Bears to kick off GO FOR GOLD weekend celebrating the Olympic Games.