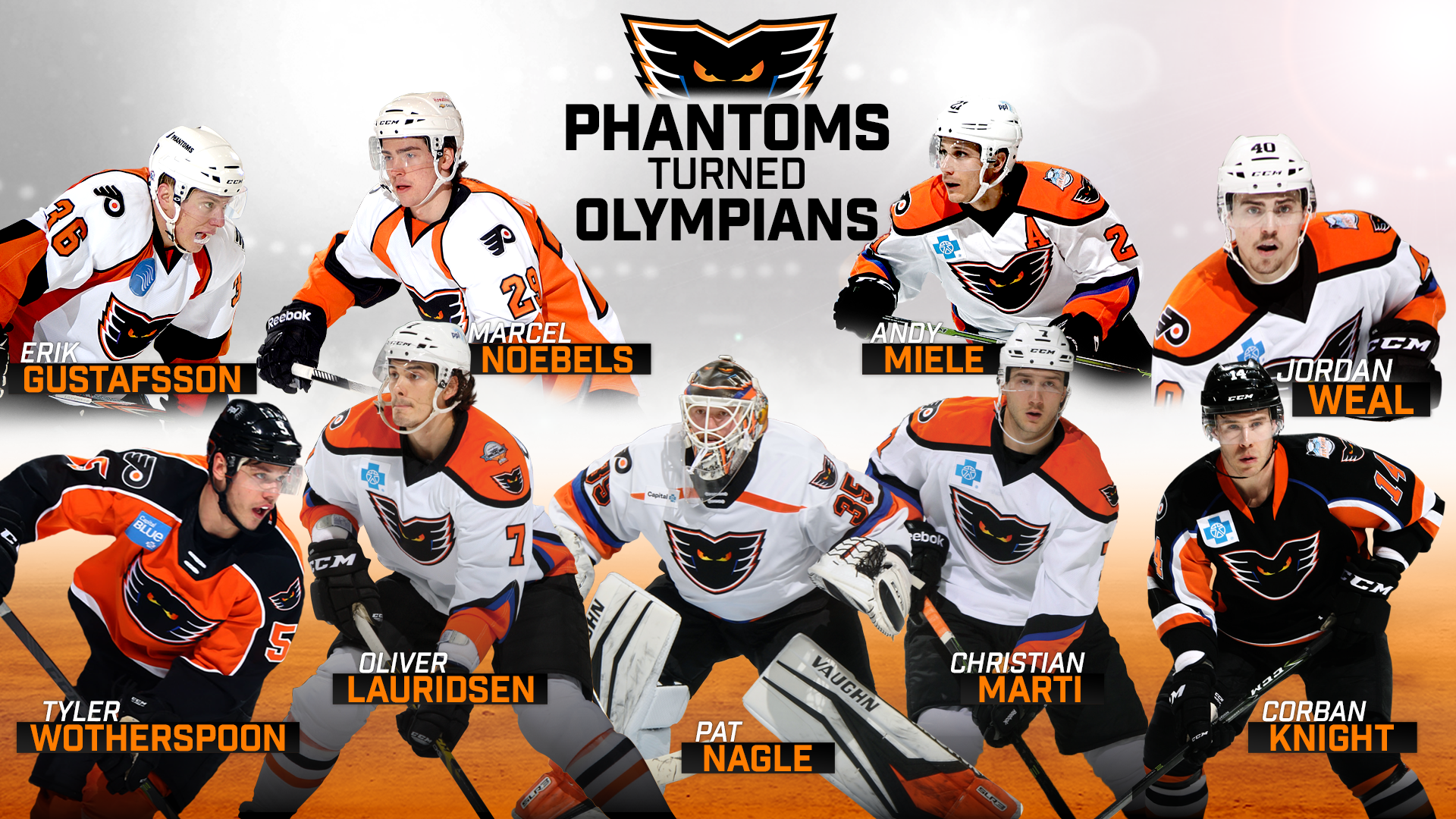 Lehigh Valley, PA – The Lehigh Valley Phantoms are proud to announce that nine current and former Phantoms players have been selected to represent their countries at the 2022 Olympic Winter Games which are underway in Beijing, China. What an incredible honor for these proud members of the Phantoms’ family. Congratulations to all!

Local fans enjoying the Olympics hockey competition on television can cheer for their favorite Phantoms products who are playing for six different countries: 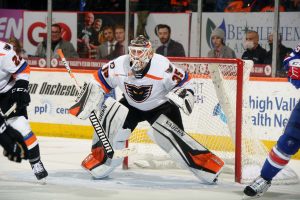 Nagle, 34, is a current Phantom playing for the United States. The veteran goaltender from Bloomfield, MI has been as steady as they come in the Lehigh Valley net going unbeaten in regulation with a 7-0-3, record, 2.37 goals-against average and .911 save percentage. In an emotional finish before departing for Beijing for three weeks, Nagle recorded his first career AHL shutout in a 4-0 gem with 26 saves at the first-place Hartford Wolf Pack on January 29. Nagle is the active winningest goalie in the ECHL with 198 career victories. This Olympics honor is a fitting tribute to one of the greatest goalies in ECHL history who is thriving in his late-career opportunity with the Phantoms. 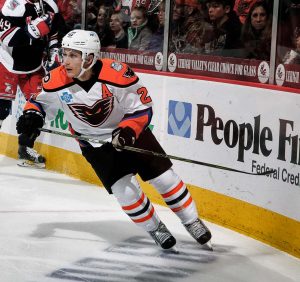 Miele, 33, played for the Lehigh Valley Phantoms in 2016-17 scoring 13 goals with 44 assists for 57 points. His 44 helpers is the second-highest single-season total in Lehigh Valley history. The 2011 Hobey Baker winner out of Miami (Ohio) University grew up in Detroit, MI and currently plays in the KHL for the Nizhny Novgorod Torpedo in Russia where he has spent three of the last four seasons. 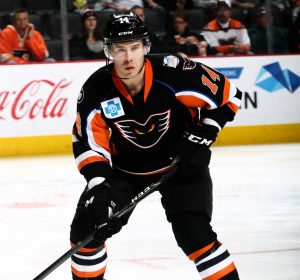 Knight, 31, played for the Lehigh Valley Phantoms over three seasons from 2016-17 through 2018-19. Over 138 career games with the Orange and Black, the hard-working center scored 29 goals with 58 assists for 87 points. The University of North Dakota product who grew up in Calgary, AB also played in 23 games with the Flyers in 2018-19. Knight has played stellar hockey the last two seasons with the Omsk Avangard in the KHL where he won a Gagarin Cup Championsip in the 2020-21 season. 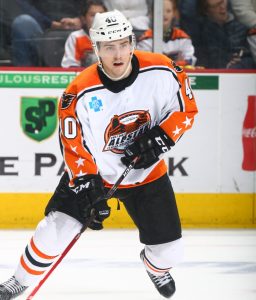 Weal, 29, was one of three Phantoms to play in the 2017 AHL All-Star Classic at PPL Center. He averaged over a point-per-game in his stay with the Phantoms scoring 15-32-47 in 43 games. He was second in the AHL in scoring at the time of his recall to Philadelphia in February. A native of North Vancouver, Weal also played in 124 career games with the Flyers through the 2018-19 season where he scored 19 goals with 23 assists for 42 points. Weal played last year for the Laval Rocket in the AHL and currently plays for Kazan Ak-Bars in the KHL. 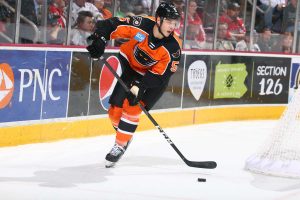 Wotherspoon, 28, spent the last two seasons patrolling the Phantoms’ blueline in 2019-20 and 2020-21 playing in 78 games and scoring 4 goals with 24 assists for 28 points. The Burnaby, BC product currently plays for the Utica Comets in the AHL. 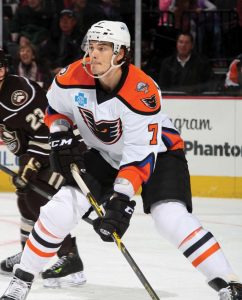 Lauridsen, 32, from Gentofte, Denmark, is again wearing the Red and White of his home nation. That’s nothing new for “Ollie” who has played for Denmark in several IIHF World Championship events. Lauridsen played for the Adirondack Phantoms and Lehigh Valley Phantoms from 2012-15 amassing 262 games and scoring 9 goals with 25 assists for 34 points while also playing in 16 NHL games with the Flyers.

A hulking 6’7″ defenseman, Lauridsen, also helped Denmark in the Olympics qualifiers four years ago so that the team could participate in its first Olympic games ever. The Danes pulled off a stunning upset of Czechia, 2-1, in their Olympic Hockey Debut on Wednesday. Oliver’s brother, Markus Lauridsen, opened the scoring with the Danes’ first-ever goal in men’s hockey at the Olympics while Oliver himself logged 20 minutes of ice-time in stellar defense in the historic win. 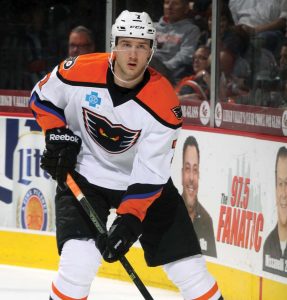 Marti, 28, from Bulach, Switzerland, played 27 games for the Lehigh Valley Phantoms in 2015-16. He has played for Zurich SC in the National League in Switzerland for the last six seasons. 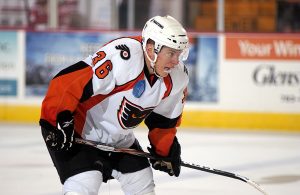 Gustafsson, 33, played 144 games for the Adirondack Phantoms from 2010-13 and also played 91 NHL games for the Philadelphia Flyers. With Adirondack, “Gus” scored 13 goals with 82 assists for 95 points. He was twice named to represent the Phantoms at the AHL All-Star Classic and was a member of the AHL All-Rookie Team in 2010-11 when he led all AHL Rookie Blueliners in points while finishing third overall among league defenseman in assists. A native of Kvissleby, Sweden, Gustafsson played collegiately at Northern Michigan University and, more recently, has played the last four seasons with Lulea HF in the Swedish Hockey League. 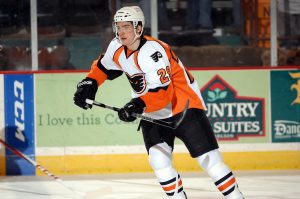 Noebels, 29, played two seasons with the Adirondack Phantoms from 2012-14 scoring 16 goals with 18 assists for 34 points in 95 career games. The Toenisvorst, Germany product was a Round 4 selection of the Flyers in 2011 out of the Seattle Thunderbirds of the WHL. He has been a veteran leader on the Berlin Polar Bears of the DEL (Deutsche Eishockey Liga) over the last eight seasons. He has played for Germany in six IIHF World Championship events and was a member of the 2018 German Olympic team that stunned the hockey world with an upset of Canada in the semifinals on its way to a Silver Medal in Korea.

The Phantoms have been wearing specialty GO FOR GOLD warm-ups jerseys featuring the flag logo of each players’ home country. We might even see some of these current Phantoms suit up in future Olympic competitions!

Come cheer for the Phantoms during our special GO FOR GOLD weekend while we celebrate the excitement of the Olympics. The Phantoms are at home on Friday night, Saturday night and Sunday afternoon.