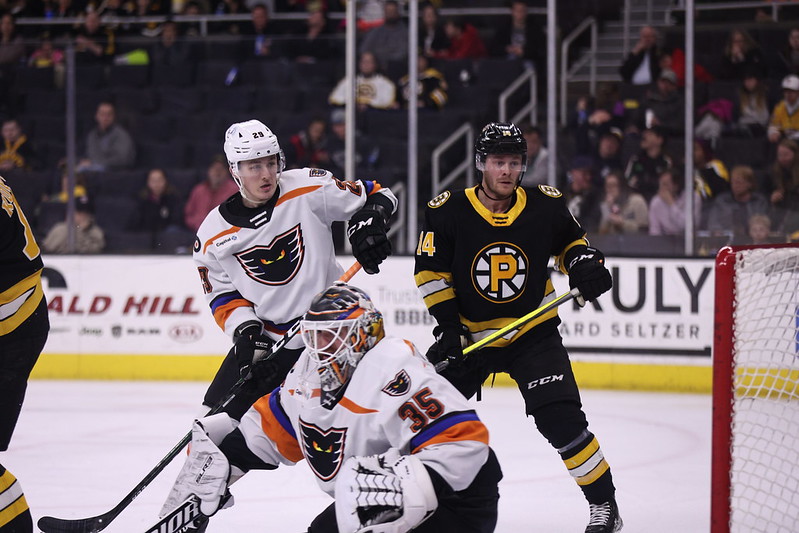 Providence, RI – The Lehigh Valley Phantoms and Providence Bruins raced out to an exciting and high-scoring start with five combined goals in the first 13 minutes after which the Bruins rallied from behind to post a 5-4 overtime win on Tuesday night at Dunkin’ Donuts Center. Johnny Beecher scored the go-ahead goal in the second period and then added the 3-on-3 winner for the Bruins.

Isaac Ratcliffe (10th) had tied the game in the third period while Wyatte Wylie (5th), Logan Day (6th) and Nick Lappin (5th) all struck for goals in the entertaining opening frame.

Cal O’Reilly’s assist on the team’s second goal of the game is the 534th of his career which moves him up to eighth all-time in AHL history, one ahead of former Philadelphia Phantoms great Peter White. 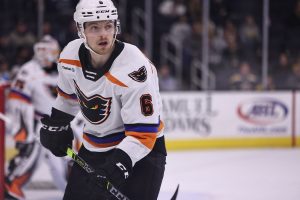 The Phantoms struck with 14:33 remaining in the first period on Wylie’s shot from right point that beat goaltender Brandon Bussi shortly after a faceoff win by Matt Strome. Isaac Ratcliffe also assisted on the play.

Providence answered just 30 seconds later on Justin Brazeau’s goal off a point shot that bounced off traffic in front.

Less than two minutes after that, it was Logan Day’s point shot with 12:18 left in the first that gave the Phantoms a 2-1 lead. His blast from the left side was set up by Brennan Menell and also by Cal O’Reilly who had rotated the puck around to the point for the 534th career helper that moved him up one more notch on the league’s all-time leaderboard.

But just nine seconds later it was Georgii Merkulov winning a center faceoff and rushing up ice on a give-and-go for his first career pro goal to quickly respond and forge a 2-2 tie.

Nick Lappin put the Phantoms ahead with 7:12 remaining in the first period when Menell’s shot hit traffic in front and bounced to the bottom of the left circle. Lappin converted from the sharp angle behind Bussi for a 3-2 lead to conclude the wild, back-and-forth opening surge of lamplighters.

Adam Johnson very nearly added to the advantage but was denied by a Bussi poke-check on his breakaway.

Steven Fogarty (12th) sniped from the top of the right circle on the power play to again even the count, this time at 3-3, with 14:19 remaining in the second period.

A friendly bounce helped Boston first-rounder Johnny Beecher score his first pro goal to give Providence its first lead. Joona Koppanen’s drive around the glass kicked off a stanchion and found the stick of Justin Brazeau in the left circle. He smartly dropped to a trailing Beecher who smacked in the Bruins’ go-ahead goal with just 51 seconds remaining in the second period giving Providenceadvantage heading into the second intermission.

Lehigh Valley equalized with 10:37 left on Ratcliffe’s deflection at the net-front of a one-timer from Adam Clendening at the top of the left circle that was neatly set up by Logan Day. Ratcliffe becomes the eighth Phantoms player to reach 10 goals this season including the third to do so in the past week joining Maksim Sushko and Wade Allison.

The Phantoms expertly killed consecutive Providence power plays to keep the game deadlocked at 4-4. That included 1:03 of 5-on-3 time for the Bruins. Linus Hogberg had a valuable clear in the sequence and Pat Nagle made a couple of clutch saves.

Lehigh Valley received its own power-play chance with 4:05 remaining in the third period but was stymied by the Providence penalty kill.

Providence won the opening faceoff to begin overtime and eventually won on its only shot of the extra period when Beecher would gain entry with speed up the left wing. His shot was partly tipped by Wade Allison defending on him but the shot made it through on the short side for the game-winner.

The Lehigh Valley Phantoms have just five games remaining in the regular season including four at PPL Center.

The Phantoms return to PPL Center this Friday night hosting the rival Hershey Bears who have gone 0-6 in Allentown this season. The Phantoms and Bears will rematch in Chocolatetown on Saturday night in the back-end of the home-and-home series that will also be the Phantoms’ last away game of the season.