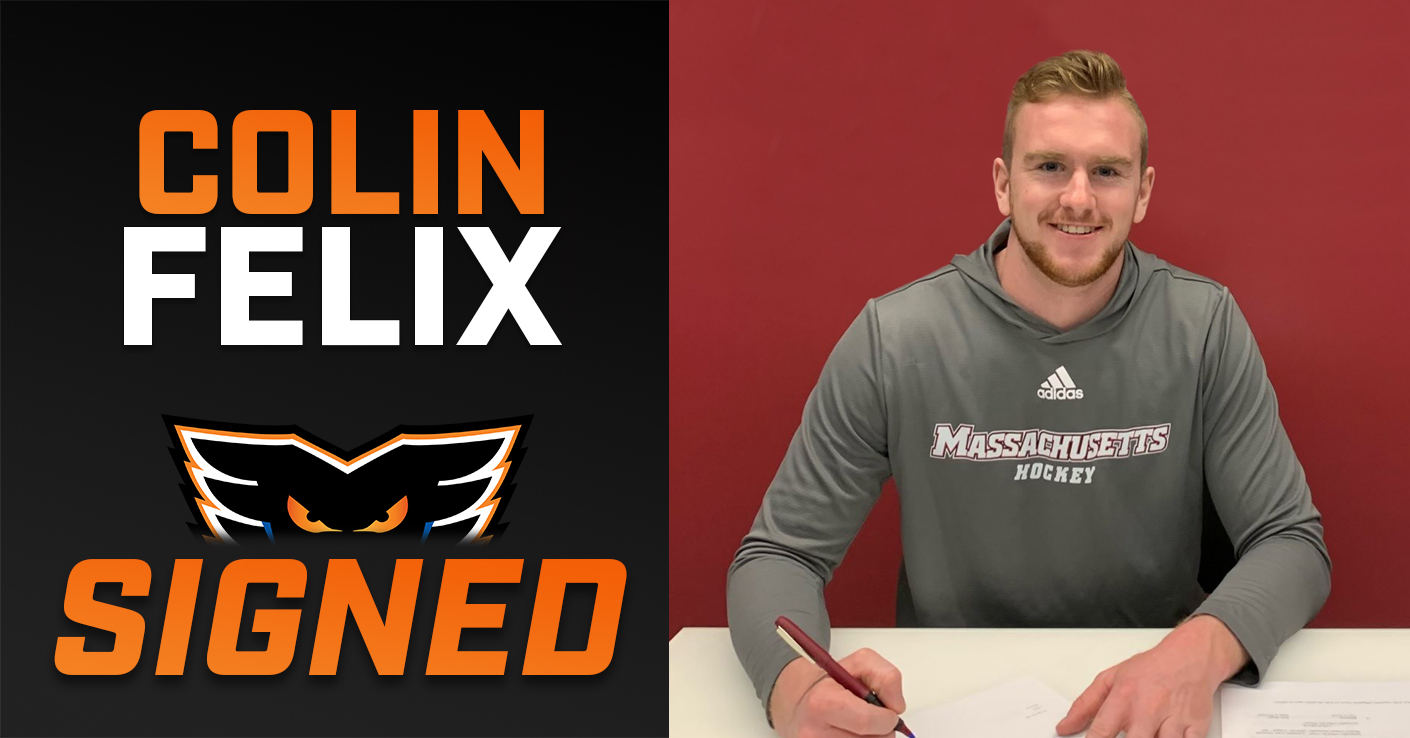 Lehigh Valley, PA – The Phantoms are pleased to welcome defenseman Colin Felix, who has signed with the Lehigh Valley Phantoms for the 2022-23 season.  When he puts on his Phantoms jersey, it will be a familiar logo for the newest member of the team. Colin is the son of Chris “Cat” Felix who was head athletic trainer for the Philadelphia Phantoms from 1996-2004. Colin attended many games and practices of the Philadelphia Phantoms when he was a little boy and was a familiar presence to players, coaches and Flyers’ management.

The right-handed shooting defenseman from Audubon, NJ completed his four-year collegiate career at UMass-Amherst where he played in 140 games scoring four goals with 38 assists for 42 points. On April 10, 2021, UMass defeated St. Cloud State 5-0 in the Frozen Four championship game at PPG Paints Arena in Pittsburgh for the first-ever national title for the Minutemen. Felix had a +3 rating in the championship win. It was the second straight appearance in the National Championship game for UMass who had lost to Minnesota-Duluth 3-0 on April 13, 2019 at Keybank Center in Buffalo.

Felix, 23, was invited by Flyers Assistant General Manager Brent Flahr to participate in Flyers Development Camp in 2019. The 6’1″ and 195 pound blueliner was thrilled to have the opportunity to join the Flyers’ organization with development coaches who remembered him as a kid. Now, he is officially joining the Phantoms as a member of the team.

Felix is well known to long-time Flyers’ development coaches and staff such as Daniel Briere and Kjell Samuelsson.

From John Matisz article in The Score: “Little Colin would high-five players, bump fists with coaches, and get a cookie from longtime executive Paul Holmgren. In the trainer’s room, he would sit on a vacant medical table and try to participate in adult conversation. Former Phantoms captain John Slaney – who briefly lived with the Felix family, inspiring Colin to play defense and wear No. 26 – remembers Colin asking if he was OK minutes after Slaney got his teeth knocked out. Back home, Colin walked around wearing a helmet with a visor, chinstrap undone, just like the pros in warmup.”

Now Flyers Special Assistant to the General Manager Daniel Briere spoke about Felix in a 2019 article by Dave Isaac for the Courier-Post. Felix had also played with Daniel’s son, Carson Briere, when they were kids on Team Comcast where Daniel was helping out head coach, and former Flyer, Derian Hatcher.

“Colin is a big, strong, stay-at-home defenseman,” Daniel Briere said. “He can chip in here and there, but the biggest thing is he plays with a mean streak. He’s got that leadership quality about him that really differentiates him from most other kids. He’s a natural leader. You see him in the dressing room and he’s always bringing guys to do the right things, to play the right way to lead by example. He’s captain material on any teams that he’s gonna play on.”

A three-time Hockey East All-Academic Team selection at UMass, Felix rates 10th in program history in games played. He began his collegiate career with a 124-game ironman streak. He was also named to the Hockey East All-Tournament Team this past March putting up 10 points on two goals and eight assists in helping the Minutemen repeat as league champions. Before college, Felix attended St. George’s School in Middletown, Rhode Island.

Colin Felix will officially join the team he grew up cheering for at Lehigh Valley Phantoms Training Camp in September.